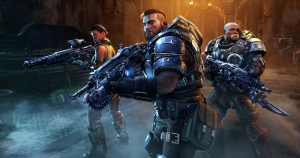 Gears Tactics is like XCOM cranked up to a 11 and smothered in viscera.

What at first might sound like a fever dream quickly manifests into some of the best turn-based strategy gameplay the genre has ever seen – and that's high praise coming from someone that's pumped hundreds of hours in the XCOM games over the years.

The story follows Gabe Diaz — father to Gears 5 protagonist, Kate — and a small band of soldiers as they hunt to bring down Ukkon, the Locust geneticist responsible for creating the Corpser, Brumak, and other Imulsion-enhanced monsters.

It’s riveting stuff, with all the usual Gears twists and emotive plotlines weaving together as the acts progress.

The same quality of animation and production that you’d expect from The Coalition is evident in the games cutscenes, too, making this feel like a proper entry in the Gears series – not just a spin-off.

Where Tactics really takes a step in a new direction is the turn-based gameplay, though.

Tactics was designed to be freeing and accessible, and that goal was executed immaculately. There’s no square-by-square grid, taking damage is no longer crippling, and there’s even a freely rotating camera, too.

Your soldiers also start with 3 action points that can be used in any order – another breakaway from the traditional XCOM formula that sets Gears Tactics apart, making the latter more player-centric in the process.

This opens up new opportunities like firing three times at a key threat, or moving to flank a straggler, picking them off, and then entering overwatch with your final action.

Your soldiers have various skills and equipment mods at their disposal, too, meaning you always have an enjoyable amount of flexibility when responding to threats.

Gabe, for example, has powerful Support perks that provide your squad with additional actions and free reloads, and combining these can let you wipe out 10+ Locust in one fell swoop.

This all culminates in a system that feels much less restrictive, and generally more gratifying than the traditional style of turn-based combat.

It might sound a little outlandish to purist fans of the genre, but it’s balanced incredibly well with Gears Tactics’ enemy design. The extraordinary quickly becomes the necessary if you want to survive the waves of enemies that are hurled at you.

Grenadiers and Wretches pour forth from Emergence Holes, Drones and Snipers drop from overflying Reavers. The familiar faces don’t stop there, though, with everything from Boomers to Brumaks making an appearance in Tactics.

The boss encounters are particularly testing, pitting you against overgrown behemoths with multiple health bars and wide-reaching attacks. These fights are stressful and challenging, but highly rewarding.

Smaller touches also play a big role in making combat feel rewarding; enemies are accurate and plentiful, but taking damage and even being downed don’t lead to debilitating penalties for your campaign.

This lets you reach your aggressive power fantasy without feeling completely unstoppable or overpowered.

What’s made clear throughout the game is that this is still very much a Gears title.

Whether it’s the gritty cutscenes with gruff soldiers, or gory executions making a glorious return, there’s no mistaking which franchise Tactics is a part of.

Executions are far more than blood-soaked eye candy, though; they’re a pivotal aspect of your battle strategy, as they grant your soldiers an additional action point for that turn.

Together with the other innovative mechanics, this gives combat a great feeling of tempo.

There’s also a wide range of weapon, armor, and character customisation in Tactics — all of which makes it into the cutscenes for some added immersion. But the perks that your five playable classes can unlock are the real star of the show.

You can build incredible synergies between the skills and weapon/armor mods you can equip. One of my Scouts became a powerful grenadier that spent most of their turns lobbing grenades and proximity mines, while Gabe’s support skills allowed me to bend the rules of engagement to my will.

They’ve also taken great strides to improve the clarity of the turn-based tactics genre, too, with easy-to-read sightlines, fog of war, enemy overwatch cones, and much more. Though many of these techniques have been attempted before, the quality and visual coherence here is honestly impressive. Combining this with the commendable range of accessibility options that The Coalition is known for, and the incredible momentum that combat maintains, Gears Tactics is an excellent entry point for anyone that’s yet to try an XCOM title.

For those perhaps unsure of the genre, it’s the perfect game to make you fall in love with turn-based tactics.

There’s more I’d like to gush about, like how optional objectives and mission restrictions force you to vary up your approach to each encounter, but I’d be here all day.

The only substantial complaint I have is with the pacing. The side missions make sense thematically but eventually come off as repetitive busywork, while the game ends just as it feels like it’s hitting its stride.

The campaign took just shy of 20 hours on the recommended difficulty, which is admittedly still a bargain if you’re picking up Gears Tactics via the Xbox Game Pass.

Finishing the campaign does unlock Veteran mode, which lets you keep completing side missions with your high-level soldiers, but starting a new save on a higher difficulty is probably a more interesting endeavour.

Nevertheless, the production quality and genre-redefining mechanics on show here leave me longing for a some DLC or a sequel. Whatever the future holds for Gears Tactics, I’ll be there for it.

– Reviewed on Windows PC with a code provided by Microsoft

Gears Tactics is a brave new take on the turn-based strategy genre, executed to perfection. The freedom and fast-paced action that it provides are a breath of fresh air, and it nails so many mechanics that will hopefully become staples for the genre.

It left me wanting more, though, which on one hand is glowing praise for the addictive, engaging gameplay, but it was also a little disappointing when the ending arrived so soon.

Still, Gears Tactics blows its competition out of the water in terms of moment-to-moment excitement and production quality.