The 2020 Entertainment, Attractions & Gaming International Expo was recently held in London, and TheGamer was on hand to try out the new games that could soon be making their way to arcades, malls, and theme parks near you.

The Sega booth had a mixture of games based on classic Sega franchises and movie tie-ins. There was a focus on machines that offer physical feedback and special effects that make the player feel as if they’re really in the game, which made for some impressive demonstrations.

Related: Sega Ages Sonic The Hedgehog 2 Will Include A Knuckles Mode 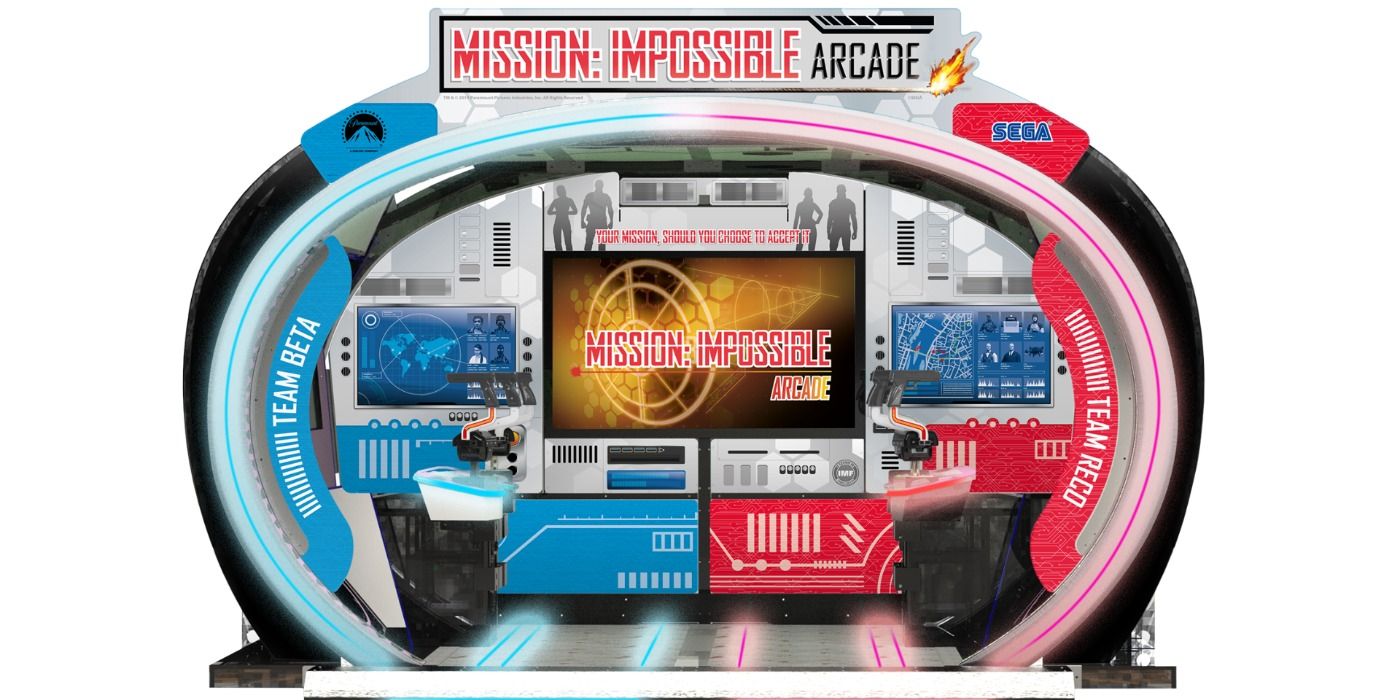 Mission: Impossible Arcade is a shooter for up to four players. Two players can take on missions together while competing with another two rival players on the same stages. The game is distinctly more violent and action-packed than the movies that it is based on, but that’s to be expected for a shooter, as the player must gun down hordes of replicants and cyborgs on different missions, with the occasional moment of espionage thrown in… that lasts for around five seconds before the carnage begins again.

Each player has access to two guns that are connected together. The player can fire a gun on its own for increased accuracy or use both for greater coverage over an area. The game has lots of QTEs and minigames which involve pressing a button at the correct time, aiming at buttons in order to input passwords, or even searching areas for items. These QTE sections can be frustrating (especially the ones based around timing) and the game excels when it sticks to gunning down enemies.

The visuals, music, force feedback and action in Mission: Impossible Arcade are all stellar. The QTEs hold it back a little back, but the build we played was still a prototype version of the game, so there’s a chance these could be lessened or made less frustrating in the retail release. 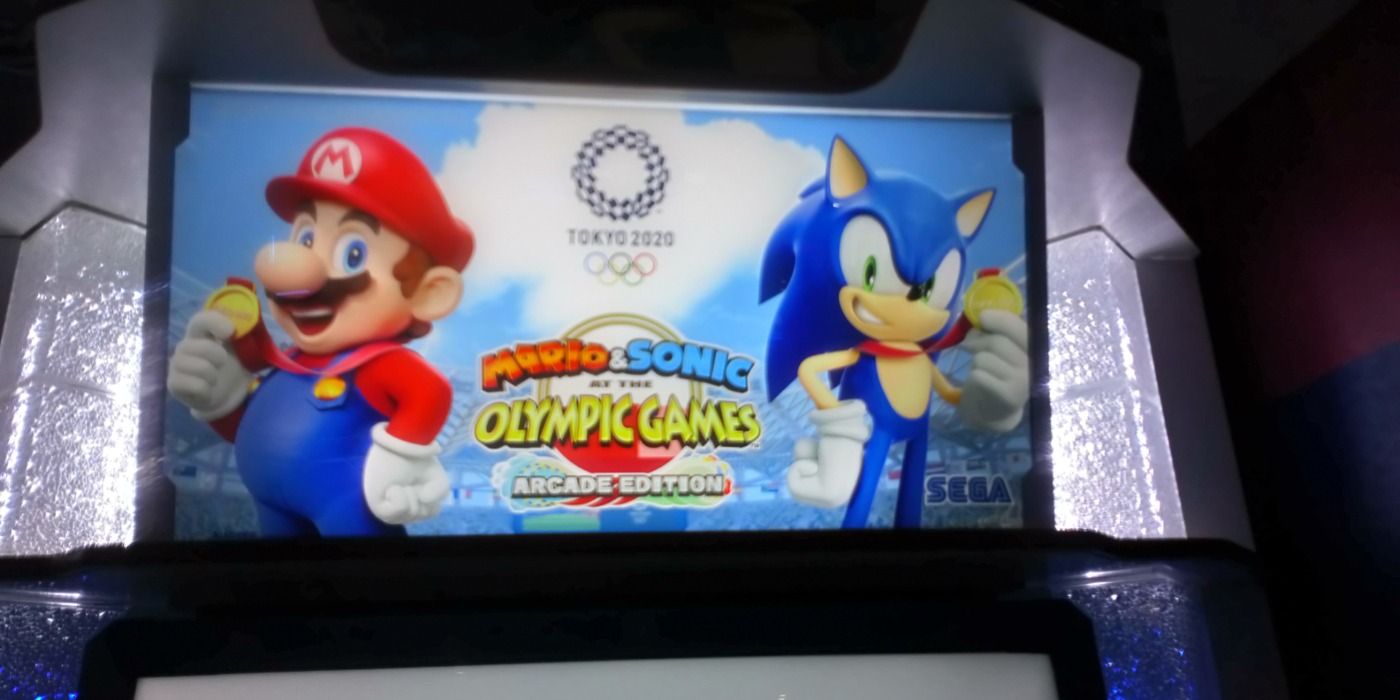 For the younger gamers in the audience, there is Mario & Sonic at the Olympic Games Tokyo 2020 Arcade Edition. The game has twelve events & four retro games, which are played using three different buttons. These buttons are used from everything for moving characters, building up meters, and QTE events. The games are basic, but it’s meant for kids and they would get a kick out of it, especially in the competitive events that use multiple machines.

The establishments that have purchased the Mario & Sonic at the Rio 2016 Olympic Games can also order kits that can upgrade their machine to the Tokyo 2020 edition. 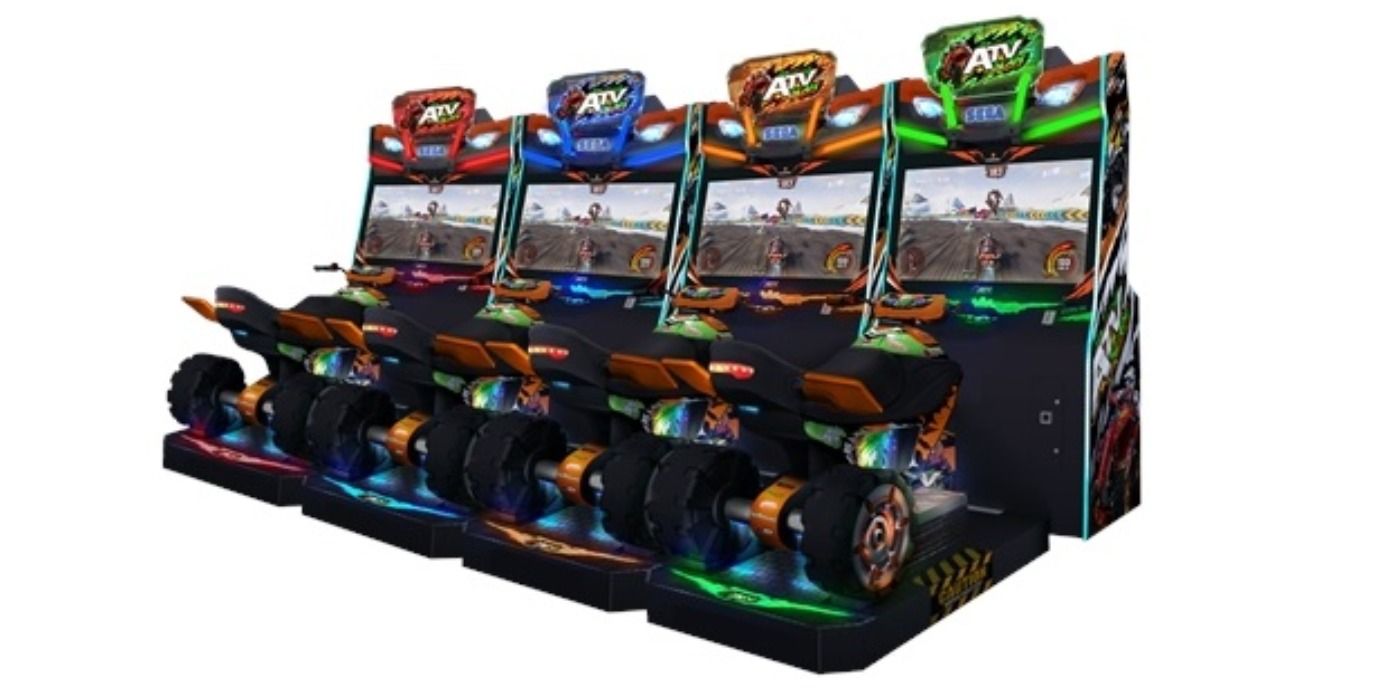 There has been a growing trend of arcade machines using feedback and effects to simulate what is happening on the screen, which is something that the home market has trouble offering. ATV Slam had some of the most impressive feedback effects in the show, with the bikes jerking around in a realistic manner, blasts of air whenever the player boosts, and vibrations that match what is happening on screen. The player can also disable the effects with the press of a button if they feel too severe.

In terms of gameplay, ATV Slam is just another racing game, but the effects are what make it feel like a genuine experience and it’s one of the games that kept us coming back for more throughout the show.

House Of The Dead: Scarlet Dawn 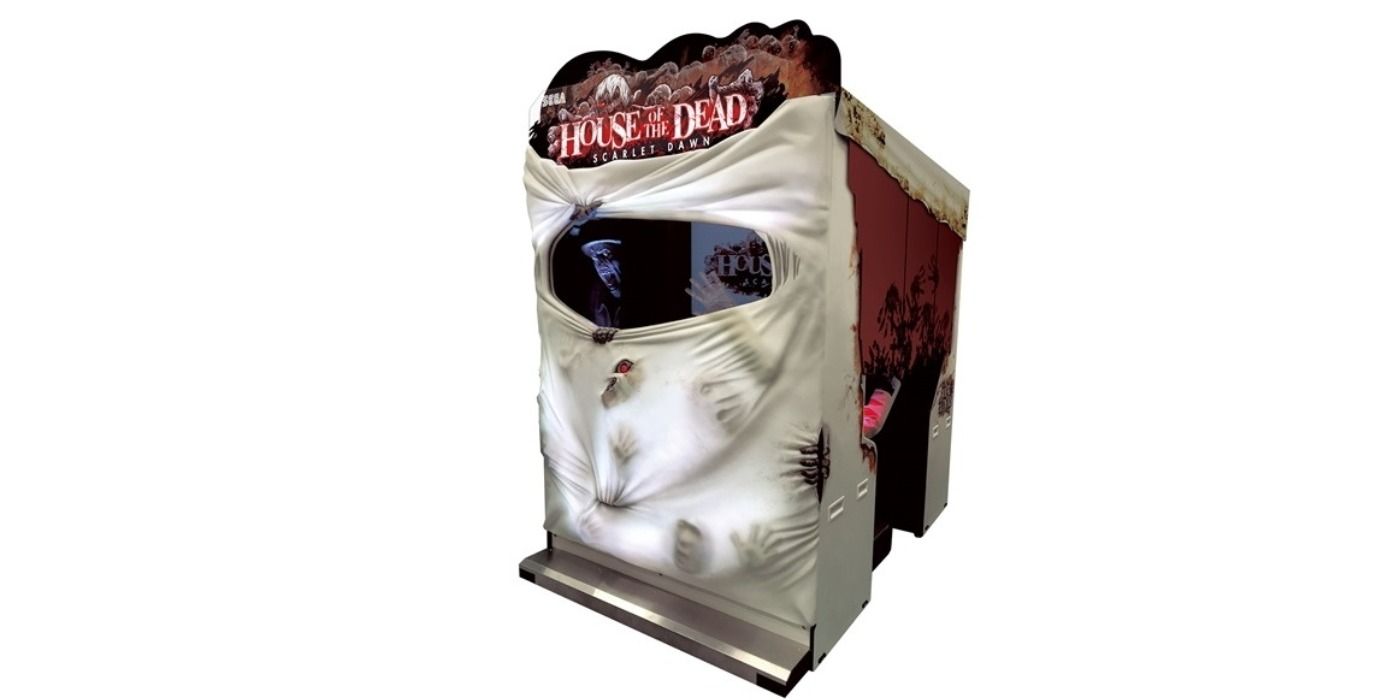 House of the Dead: Scarlet Dawn is certainly impressive to behold from the outside. The cabinet is wrapped up, with monster figures trying to escape from within, while butcher-style shutter flaps act as doors to keep the outside world at bay. The cabinet is meant to include 5-D surround sound with ambient effects, but these were lost on a massive & busy show floor, so the effectiveness of these elements will differ from venue to venue.

As for the game itself, it’s essentially a much faster-paced version of the old House of the Dead games. Instead of the small groups of zombies and monsters from the old games, the player is now tasked with fighting hordes of monsters and shooting parts of the environment to keep them at bay. The player has access to machine pistols, which fire at a much faster rate than pistols in the original games and they can also bring sub-weapons into each stage (such as shotguns or grenade launchers) which deal a lot more damage but have limited ammunition. The game also keeps the wooden voice acting of the original games, as has become a tradition. House of the Dead: Scarlet Dawn doesn’t reinvent the wheel, but it has refined and improved the design of the classic House of the Dead games. 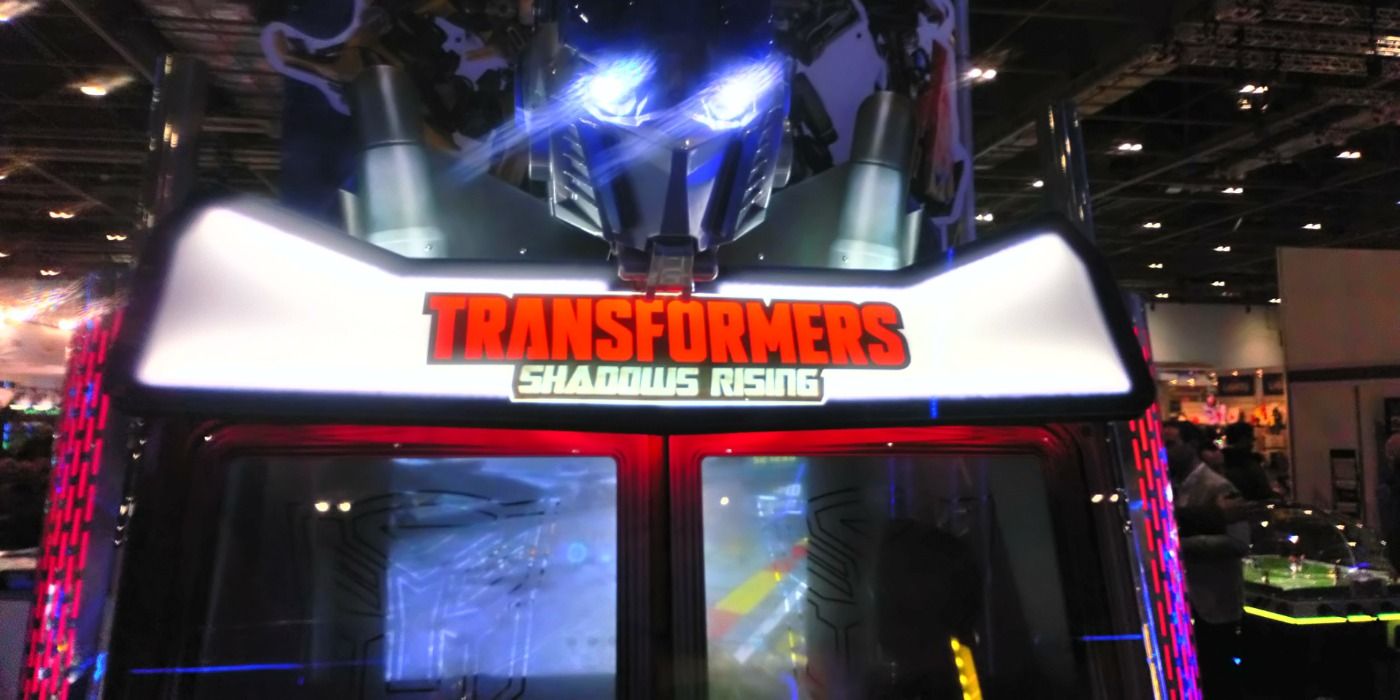 Like House of the Dead: Scarlet Dawn, the Transformers Shadows Rising cabinet is impressive to behold from outside, as it’s designed to look like Optimus Prime in his truck form, with his robotic head and glowing eyes looming down at the player.

Transformer Shadows Rising has some impressive level design, ranging from racing down city streets to flying through space. It’s just a shame that most of the enemies in the game aren’t that impressive in terms of design, as most of them resemble the Chitauri from The Avengers. The gameplay offers fast and frantic fun when it comes to shooting things, with a focus on targeting specific body parts on the larger Decepticons, but the QTEs leave something to be desired. The game comes with a lever that is used for QTE events, where the player is given a moment’s notice to pull it in the correct direction. These moments can feel really cheap and two people playing together might come to blows over pulling the lever in the wrong direction. 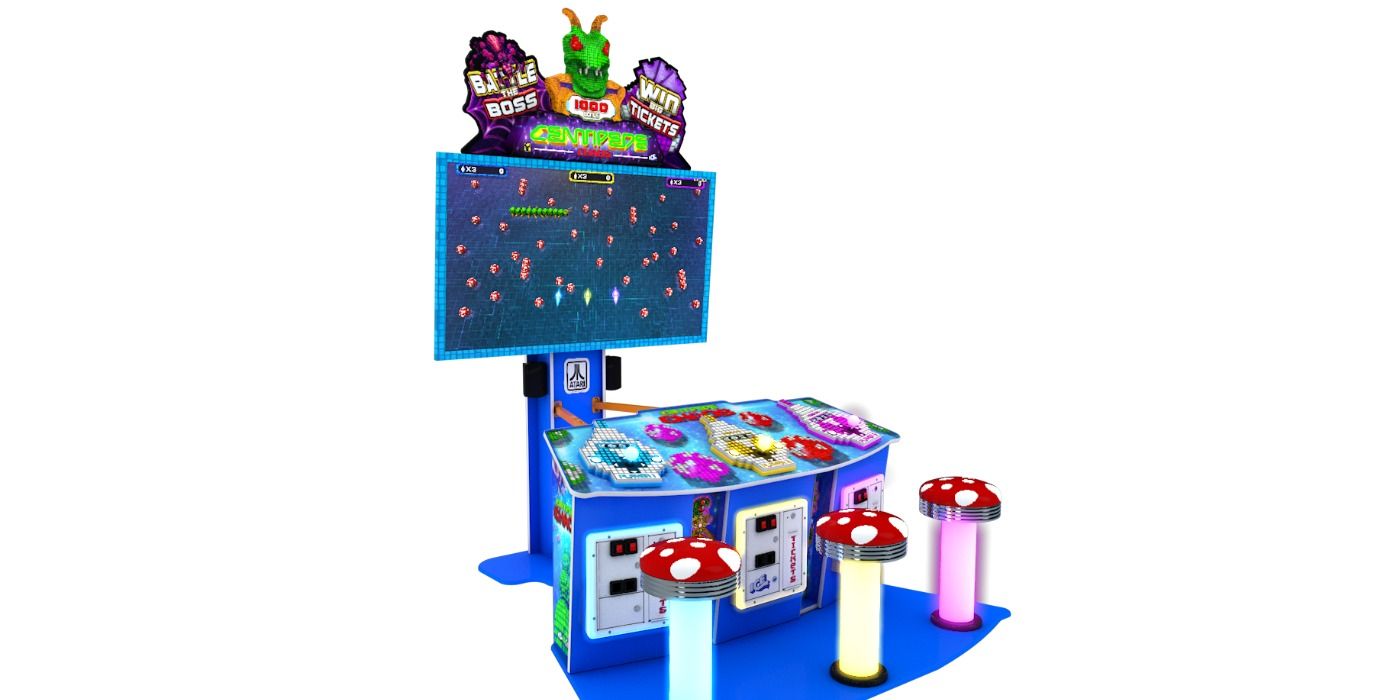 Centipede Chaos is developed by Triotech Games and is an expanded version of the original Centipede. Up to three players can control spaceships and fight against hordes of centipedes, whose bodies break into barriers when shot. The game feels like a massive Space Invaders/Centipede crossover, with a number of insects coming at the player in all directions, power-ups that increase the area and damage of the player’s attacks, and boss monsters that take up most of the screen.

Centipede Chaos was definitely one of the hardest games we tried at EAG and it rewards skill and sharp reflexes, which is especially fun when playing with friends of equal skill level. It’s just a shame that some of the enemies feel cheap, most notably insects that fly incredibly fast at the player at a diagonal angle, making them difficult to kill. The game is still a lot of fun, especially with friends, but it can be ruthless at times.