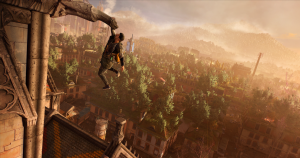 Dying Light 2 is a pretty epic game, full of tension and dramatic action moments worth experiencing.

It’s a big improvement on the six-year-old original, offering much greater scale and really delivering on it’s world-building efforts.

This is a living, breathing post-apocalypse America, one that’s been laid to waste by a zombie infection.

And those left behind are scrabbling in the remnants of what once was, trying to avoid being bitten by the undead while also dodging relatively lawless violent factions to survive.

And while none of this is particularly original, the stand-out moments in Dying Light 2 are when the night descends, turning an already volatile and highly dangerous environment into an absolutely screaming nightmare.

One where neon-lit zombie monsters chase you through a maze of escape routes as you desperately try to complete missions darting between the safety of UV light zones that can burn the creatures to dust.

This time, players visit The City – one of mankind’s last strongholds in the fight against the virus, 20-odd years after the outbreak.

It’s a tinderbox ready to kick off at any minute, and your hero Aiden, a seasoned wanderer dubbed a Pilgrim, is desperately trying to find the sister he was ripped from as a kid.

Think of the world as a Modern Dark Ages where any technology is prized and numerous factions battle it out for control of the bare bones of the city.

But daylight, there’s armed militia roaming around town beating monsters and locals alike, more genteel settlers trying to make the most of life living on top of connected buildings joined up by parkour-friendly runs and also ex criminals, fighting for control under a violent leadership.

It’s a mess of a city and the game does a great job at delivering a constant sense of unease in the gamer.

First-person, you’ll find yourself quickly learning how to run, jump and dive your way across vast areas of the map, often above ground on well-designed rat runs.

Once mastered, the parkour reminded me very much of the speed and swiftness of classic hit Mirror’s Edge, but with a whole new vibe once you inadvertently trigger a Screamer zombie and a chase ensues with multiple undead on your back.

Any mistake and you’re toast, so you find yourself pushing hard to get away and when you pull off a daring escape into the safety of bright blue UV light, there’s a real thrill.

The gameplay is slick and the story building is generally on the ball, although there are some issues with pacing.

Sometimes it’s just a bit too slow and the gap between action sequences can annoy. Tighter writing would have solved this.

Characters are well fleshed out though with a Mass Effect style chat wheel to allow you to garner information from new people you meet.

You can also influence the end product by making choices as to who you’ll support and who you will make an enemy.

It all feels fluid and like you’re in control of Aiden’s path.

The graphics are strong, colourful – not quite up there with the Spider-Mans and Forza Horizons – but you can tell this is next-gen detail and it fares well against other third-party, first-person hits like Far Cry.

There’s plenty of game here, with varied missions often following the ‘go-somewhere, get-something’ mantra that combines both all out frantic dashing and fighting elements with more subtle sneak and cower moments.

The biggest thrill is at night, when the risks are heightened and the rewards greater.

A step up for the developers here at Techland, and while there are a fair few bugs being discovered in the game, they’re working incredibly hard to plug them quickly once spotted.

Dying Light 2 doesn’t feel original in the slightest, it is bested elsewhere in visuals and gameplay, but as a total package there’s a lot on offer.

And gamers will get their money’s worth out of this zombie-bashing post-apocalypse fearfest.

It is a game that leaves you with a constant but strangely addictive edge-of-the-seat sense of stress like a strong horror movie.

And plenty to discover in a dark, menacing future world.