Games based on the Dragon Ball franchise are a dime a dozen. Many of them use the voices, visuals, and overall feel of the anime as a basis. Most of the time, they’re fighting games that aim to replicate the fast and furious combat of the show. A few have been story-based RPGs that let players explore the weird world of Goku and friends. Dragon Ball Z: Kakarot tries to be both by presenting open-world lite environments full of deep easter eggs and simple arena fighter combat.

Dragon Ball Z: Kakarot never reaches full power as either an RPG or a fast-paced fighter, but it’s the most gorgeous and detailed telling of the DBZ saga yet. 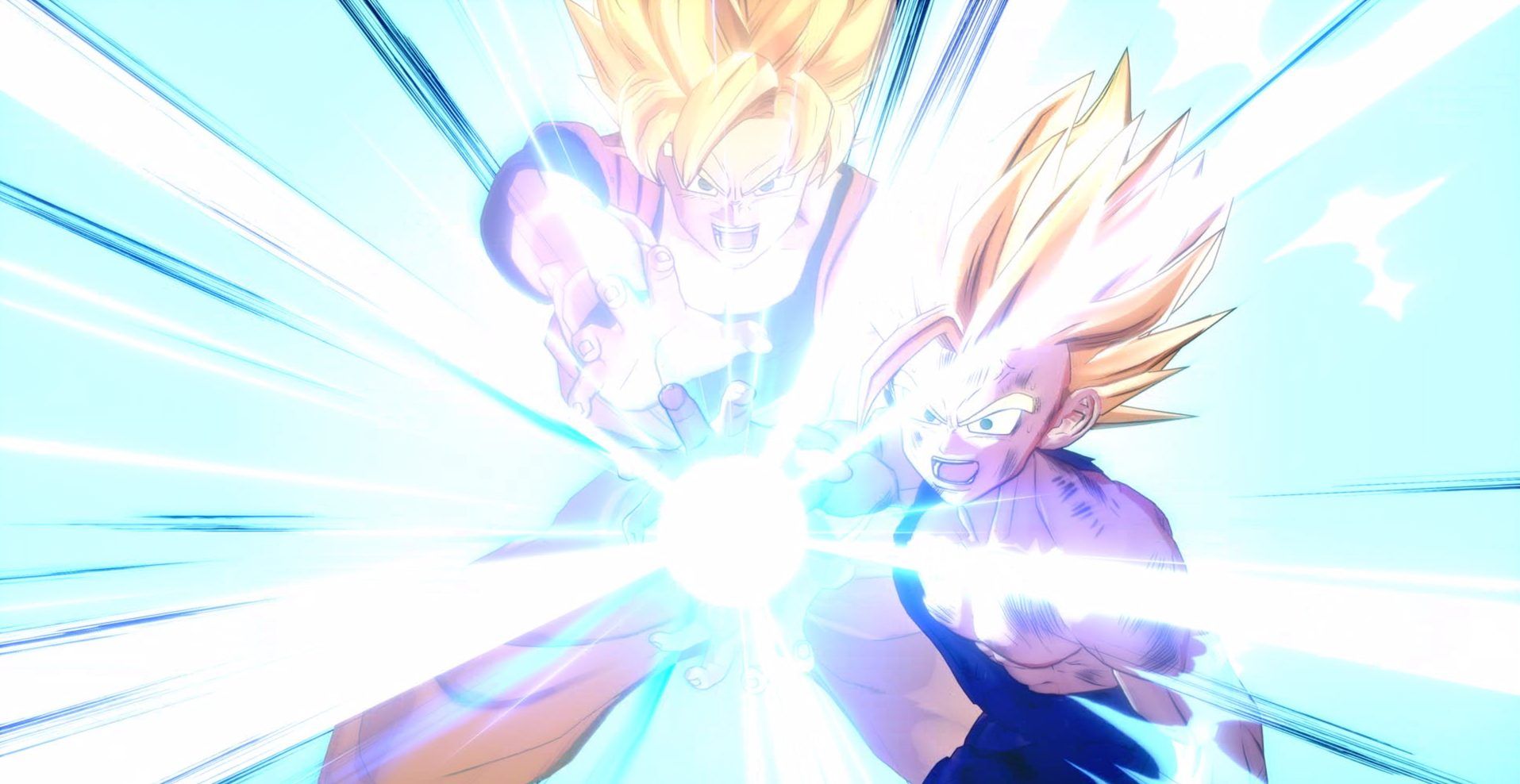 If you’re reading this review, you probably already know the story. Goku, a Saiyan raised on a mystical version of Earth, goes on a journey of super-powered martial arts battles and constant breaking of limits. In particular, Kakarot spans Dragon Ball Z. So it picks up after Goku’s married Chi Chi and had Gohan, and ends with Buu. There’s no Beerus or Super Saiyan blue here (at least not until DLC, if dataminers are correct).

That’s not particularly surprising. The game has “Z” in the title, so while I’m hopeful for DLC that goes into Dragon Ball Super I didn’t expect it in the base game. What did surprise me was how Kakarot allowed me to enjoy seeing the same old DBZ story for the millionth thanks to some small additions.

Most of these new lore bits come from Sub Stories, side quests starring characters from all throughout franchise history. Gameplay-wise they’re nothing special. In fact, they often boil down to fetch quests or battles against an all-too-common minion type. But Sub Stories succeed in spite of their tired structure because they fill in a lot of gaps in the larger Dragon Ball story. Ever wonder what happened to Android 8, also known as Eighter? Goku gets to catch up with him in an early Sub Story. Another Sub Story shows how Puar copes with Yamcha’s embarrassing death to Saibamen. These aren’t need-to-know questions, but the attention to detail allows die-hard fans to see a new side of DBZ.

The Power Of Friendship 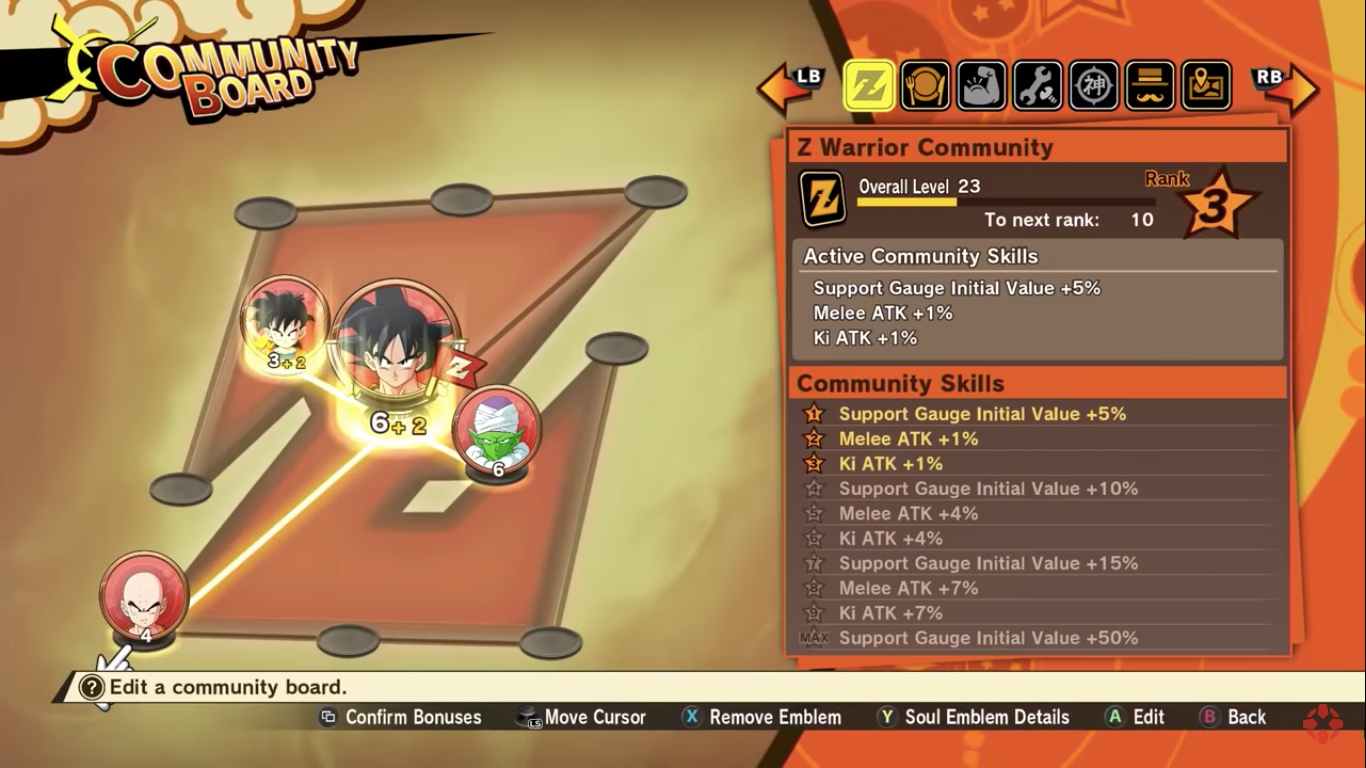 While experience points and leveling are a thing in Kakarot, it also adds its own spin on RPG advancement through three things – eating, Z Orbs, and the Community Board. The Community Board is the best of the three because, like Sub Stories, it makes overused RPG mechanics more fun by rewarding Dragon Ball fandom.

Eating and Z Orbs are very straightforward. Collecting ingredients in the various lands allows you to make recipes. Meals can completely refill your HP and offer permanent stat boosts. Z Orbs are floating around literally everywhere. They come in three different colors, although rare rainbow ones are tucked away to encourage exploration. Z Orbs can be spent on the Super Attack Tree to power up moves. My biggest problem with both of these mechanics is that they’re not that fun.

I don’t like resource gathering or cooking in RPGs, so I’m probably biased, but Kakarot‘s version isn’t very dynamic. You can simply fly through trees and oceans to gather the bulk of ingredients. Large fish require an easy timed button press mini-game. Rarer ingredients involve hunting down their specific spawn point, which is more tedium than an exciting treasure hunt. The fact that my guide to a certain annoying quest is doing well in Google searches indicates I’m not the only one feeling this way. As for the Super Attack Tree, it’s just your typical upgrade chart. 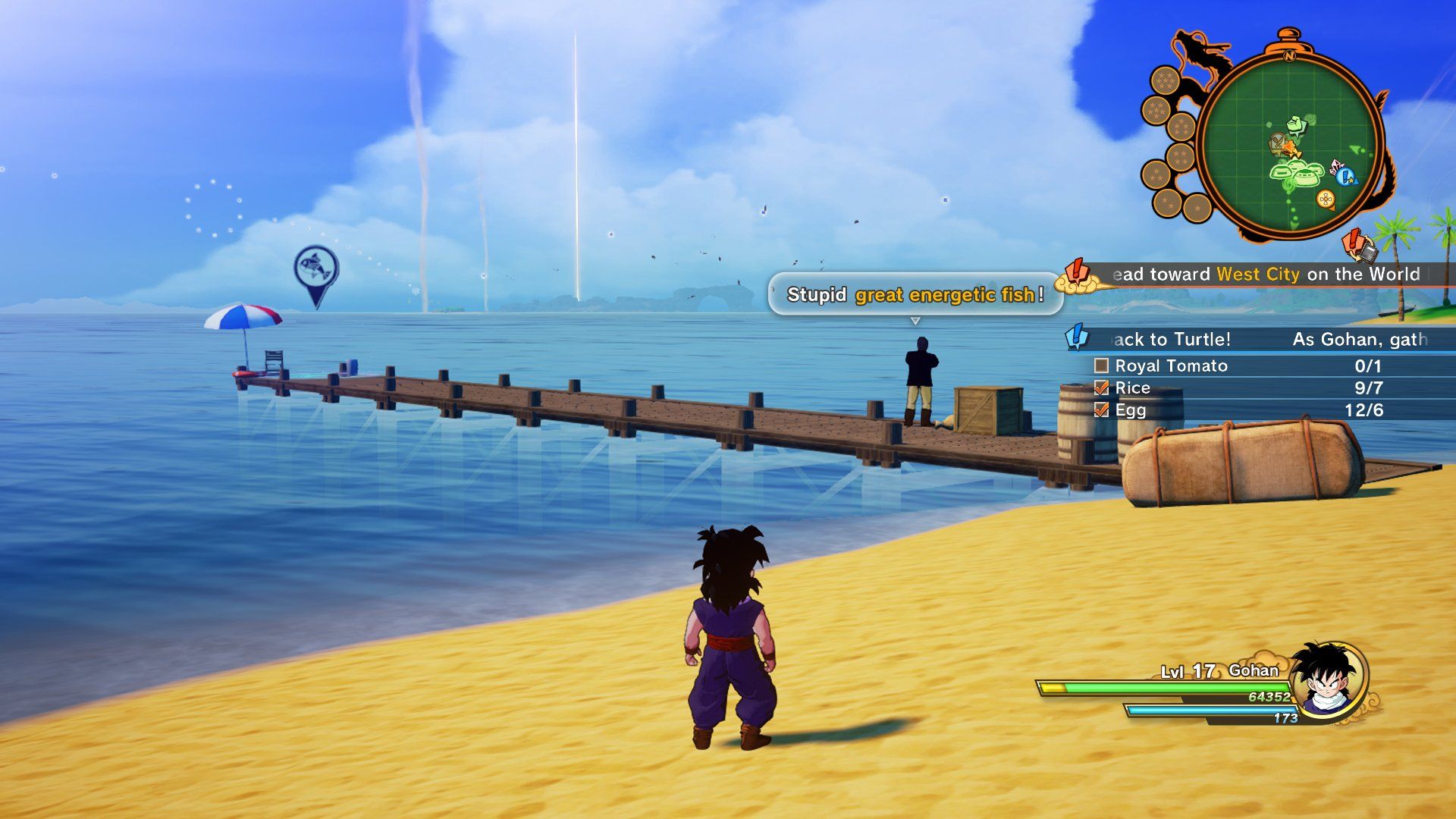 The best thing about eating is when you have a full course meal. This treats you to an animation of Goku and friends chowing down in true Dragon Ball fashion, with a ludicrous amount of plates and bowls piling up in their wake. It continues the running theme of making game mechanics more enjoyable because they’re reskinned with DBZ flair. Which leads to why the Community Board is such a great idea.

The Community Board is broken down into seven sub categories, each granting their own passive bonuses. The Z Warrior Community gives combat bonuses, while investing in the Gods Community rewards luckier item drops. To enhance these communities, one needs to drop a Soul Emblem into them. Soul Emblems represent the colorful cast of Dragon Ball, and are often earned from Sub Stories. The fun of the Community Board is deciding where to place each Soul Emblem. Some choices seem natural, like putting Bulma on the tech board. But there’s also bonuses for placing characters next to others they’re related to. Make Vegeta’s family, or have Vegeta go with Piccolo in an “enemies turned allies” group. As a fan, it gave me a little thrill to arrange and re-arrange my most loved and hated characters. 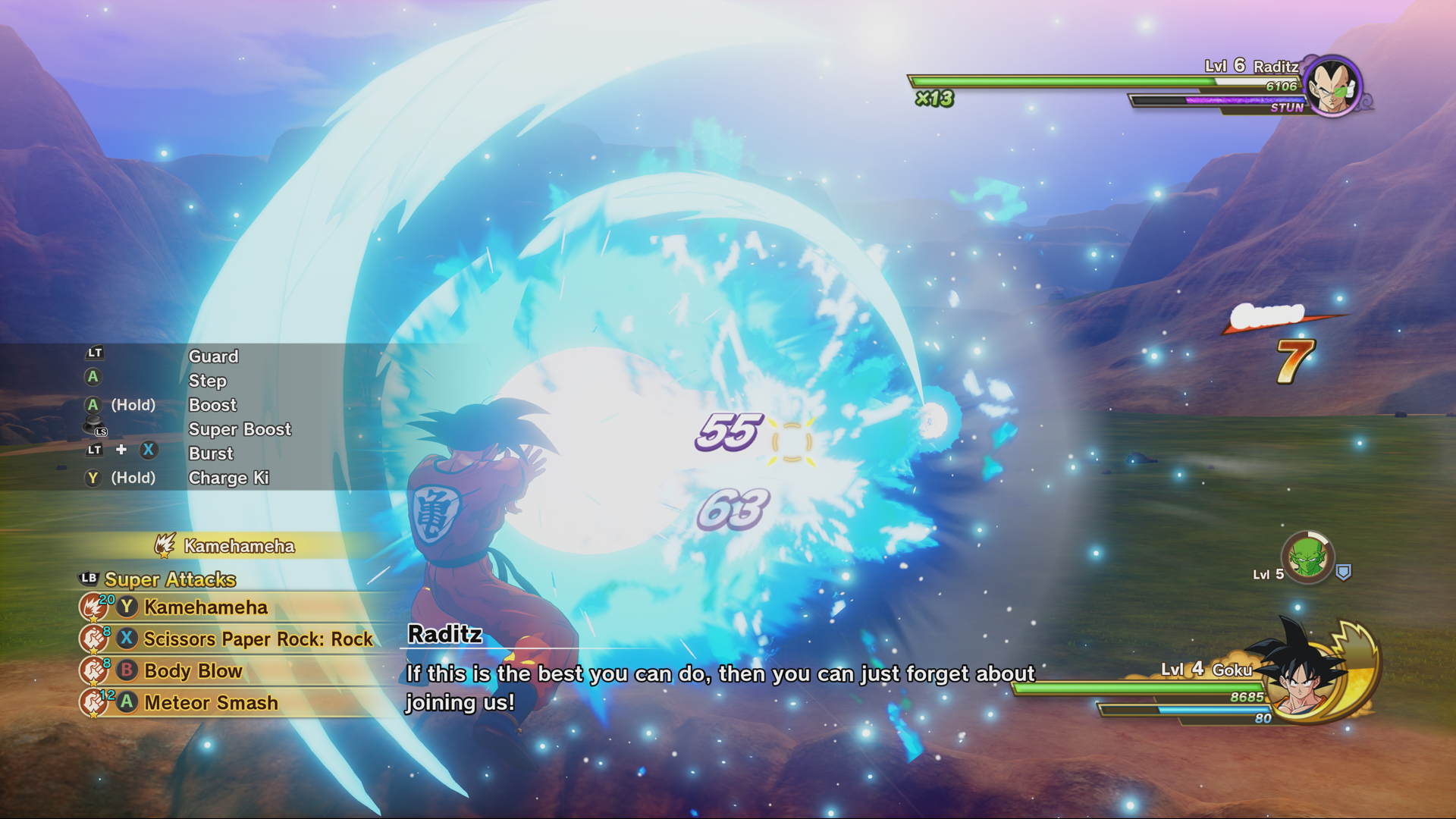 Of course, a Dragon Ball game isn’t a Dragon Ball game without fighting. Kakarot‘s battles play like a simpler version of Jump Force or one of the more recent Naruto games. One button attacks, one shoots Ki blasts, another charges, the last dashes, a trigger guards, and super/ally attacks are assigned to bumpers. It’s all a little too repetitive at first. Characters always fight flying for some reason, and any non-major story battle is staffed by the likes of generic robots or Frieza Force minions. Add another annoying RPG staple, field encounters, and even flying around to fill my grocery list became a series of unwanted fights.

After some time, the system shows a dramatic flair that makes it worthy of DBZ. You can knock foes into and through the environment. Powerful villains like Frieza have special attacks that change the camera angle and become a desperate dodging mini-game. And if you stun enemies you can get sweet cut-scenes where you flash in front of them and unleash a huge Kamehameha right in their face.

The latter half of the game adds depth and challenge to combat by expanding options. The “intermission” between major story arcs allows players to build a party of their choice. Side characters like Krillin aren’t playable, but do have their own smaller skill trees players can work with. The Dragon Balls can also be collected and used to revive old foes as powered-up versions for rematches. Much of the combat can be settled with the same rhythm of “attack, block the enemy’s charged-up kick, attack again, dodge the enemy’s beam, use your own beam, repeat.” But at least the additions of party choice and skill trees allows the player to tweak their punches and beams in the manner they find most efficient or cool. 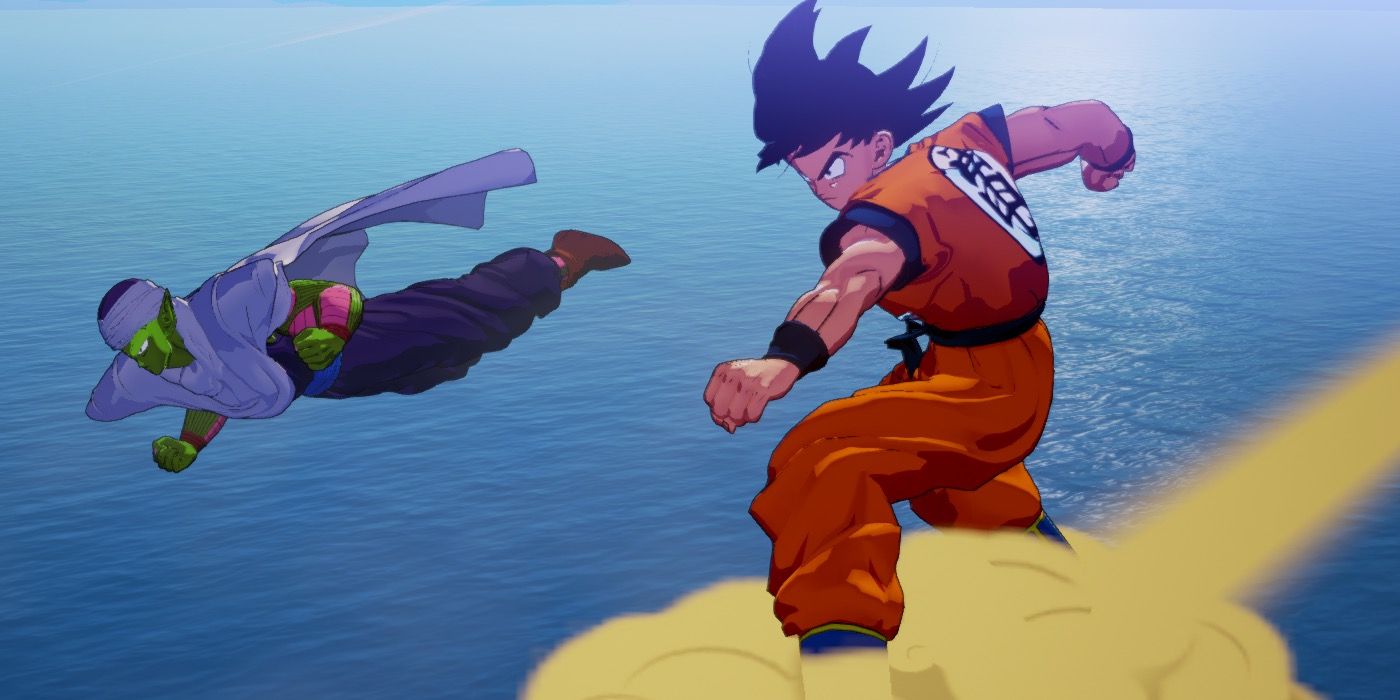 A theoretical Dragon Ball Z: Kakarot 2 could be a masterpiece if it had more complex combat, and more varied enemy and quest types. Yet, while Dragon Ball Z: Kakarot isn’t in its final form, it’s still making good use of its potential. The cut-scenes are the most visually stunning version of Goku’s saga I’ve seen. The Sub Stories give the franchise’s bit players a chance to shine. There are even crazy deep references that even longtime fans might miss. It’s clear the developers love Dragon Ball as much as we do. Next time, Bandai Namco, just let them put some of that love into the progression and fighting mechanics.