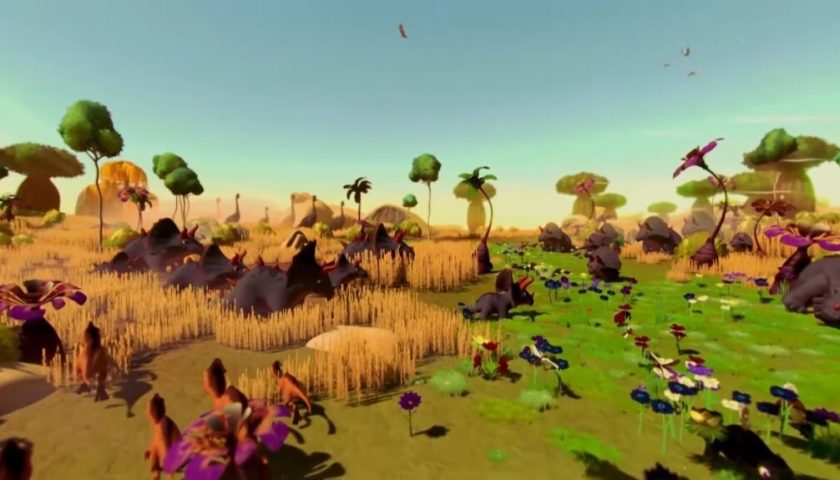 There has been some interesting virtual reality (VR) focused Kickstarter crowd-funding campaigns of late and this week welcomes another into the fold. French indie team Dreamirl has just launched one for Jurassic Snap, a chilled-out experience all about photographing dinosaurs, the aim is to raise €30,000 EUR with an official launch taking place in 2023.

Very much a family-friendly VR exploration videogame combining colourful and cure dinosaurs, Jurassic Snap‘s core gameplay arc is exploring the various biomes of a planet set within the Jurassic era, cataloguing all the wonderful creatures. Just like any wild animal, those in Jurassic Snap may not always be cooperative so players will have access to various tools to bait or repel them to get the best shots or to complete various tasks. The Gravity gun for example enables bait to be flung much further than physically throwing it.

Players are part of an expedition to record all the dinos so after shots are taken they are added to the Dinopedia, collecting all their info including their size, what they eat and their preferred environment into one handy journal. In a similar fashion to Jurassic Park, rather than simply being able to wander around and getting trampled on, Jurassic Snap employs a vehicle system you ride in, preplanning the route before heading out.

As mentioned, Dreamirl aims to raise €30,000 over the next month to help develop Jurassic Snap for multiple VR platforms as well as a normal PC version. These include Oculus Quest 2 and Oculus Rift, PlayStation VR and SteamVR headsets. In an FAQ the team has confirmed that support for the original Oculus Quest will be unlikely, saying: “We are already on the edge with a Quest 2. Releasing on Quest 1 would require a huge drop in graphics quality, so we prefer to say no.”

Funding tiers start from as little as €15 to get a copy of Jurassic Snap – the limited Early Explorer tier – with the standard funding tier being $20. After that, there are plenty of digital and physical goodies to unlock if you so wish.

Dreamirl has already listed its roadmap for Jurassic Snap should things go well. An early closed alpha for backers will begin in January 2022 with an open early access to commence in Q3 2023. The plan is to officially release the videogame in Q4 2023, so there could very well be some new VR headsets on the market by then.

As the Kickstarter progresses VRFocus will keep you updated.