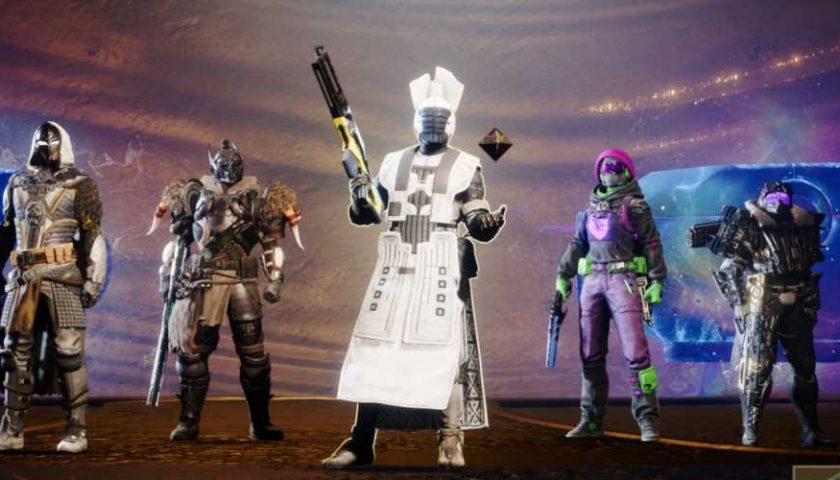 Dares of Eternity is a new six-player activity that arrived as part of the Bungie 30th Anniversary update in Destiny 2. Whether you purchased the expansion or not, you'll be thrown into your first Dares of Eternity match as soon as you log in for the first time after this week's reset. If you've played Destiny 2 for a while, Dares of Eternity will likely remind you of seasonal activities like The Menagerie from Season of Opulence and The Sundial from Season of Dawn. Here's everything you need to know about completing the Dares of Eternity activity, earning the best rewards, and making progress with Xur and the Starhorse.

What Is Dares Of Eternity?

Begin the activity by walking forward into the rift between Xur and Starhorse to launch yourself into the first arena. Clear the enemies and activate the Wheel Of Adversity to select which enemy type your team will face in this first round. There will be some slight differences depending on which enemy type you get, but the general flow of the activity will be the same. 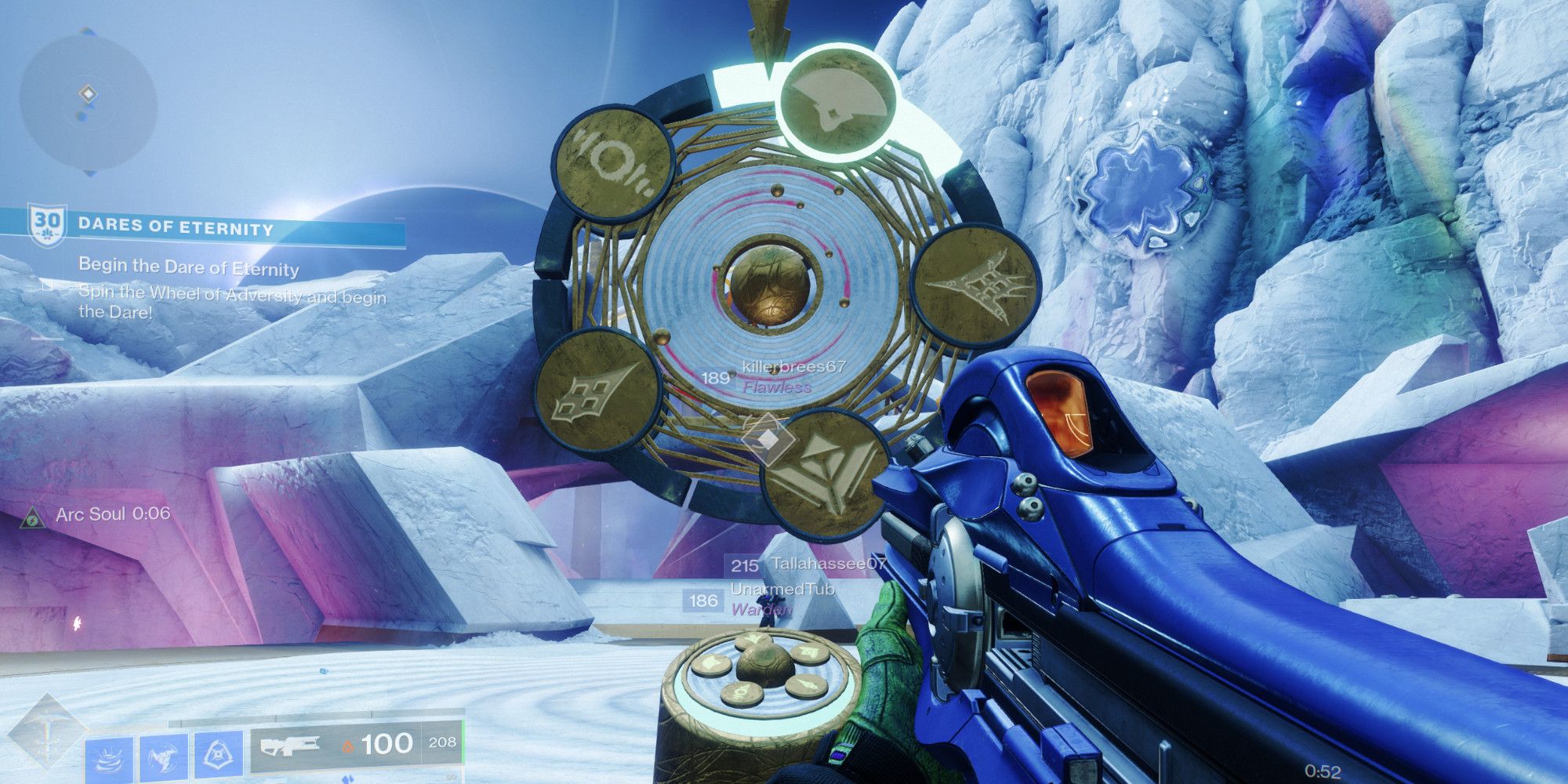 The first round has two phases. In the first round, all you need to do is defeat all the enemies. Make sure someone on your team brings mods for barrier, unstoppable, and overload because champions will occasionally appear here. Once you've cleared the arena, the second round will begin. Here, your objective will change based on which enemy you face, but they all work the same way. You'll need to defeat a marked enemy to pick up an object, then use that object against an invulnerable enemy, blight, or some other target. If you're facing the Vex, you need to kill Headbearers and pick up their Void Cranium to fire beams at the Gatekeepers to break their shields. If you fighting the Cabal, you need to kill Bombtenders and throw their cores at the Commanders. Each enemy type will have different names, but they all use the same concept. The one that's slightly different is the Taken. For them, you'll need to kill the Paraversal Contestant who will drop a pile of void orbs, then throw those orbs at the Blight. Once you've eliminated all of the enemies, you can move on to the next arena.

For The Fallen, your team will need to move around the map, standing in capture points to deactivate a bomb. You won't have much time to capture each point, so spread out and try to stand on as many as possible. If you manage to deactivate all of them before time runs out, you'll be rewarded with three additional chests. 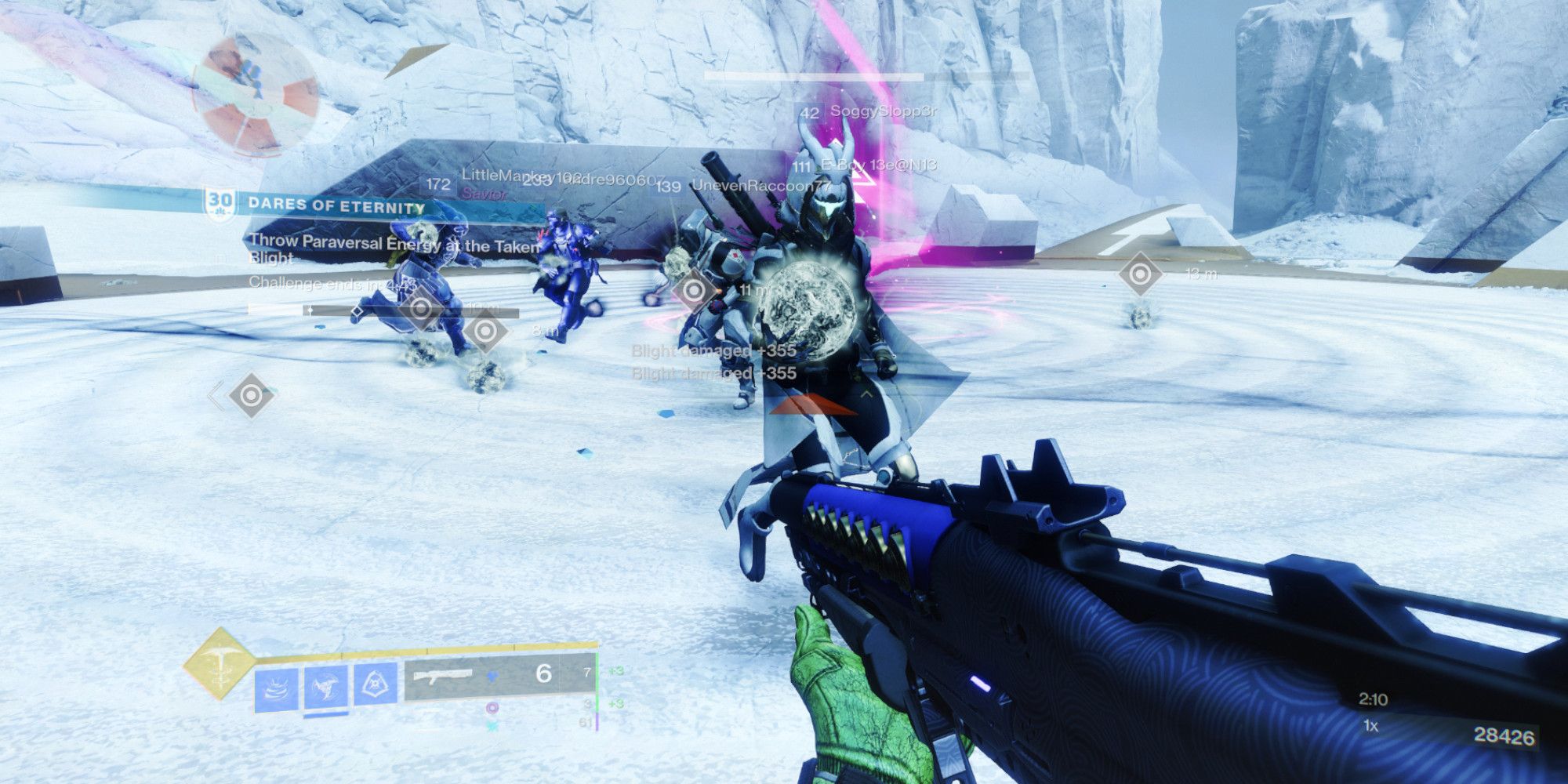 Follow the quest marker to the back of the arena and walk between the two rocks to throw yourself up into a crack in the wall ahead. You'll need to time this right or you'll run into a rotating wall that will cause you to fall to the ground. Don't worry if you miss the jump because a passageway will open in the wall at the bottom which you can use to make your way to the next objective. There's some simple platforming to do in here, nothing too complicated.

When you get to the Vault, press the switch to spin the Wheel of Adversity again. Just like the first round, you'll need to clear to phases of enemies before you can move on. For the first round, you only need to eliminate all of the enemies to progress. The second round here is just like the second round in the first part. Focus on the marked enemies, then use the object they drop to attack the invulnerable targets. When the second phase ends, you'll need to kill a boss that spawns at the end of the room. Depending on the enemies you're facing, the boss may be shielded, requiring you to either eliminate a nearby elite or hit it with objects that drop from slain enemies, just like in the previous phase. Kill the boss to end the round.

When the round ends, Xur will instruct you to guess who the enemy in the final round will be. Make your guess by standing on the pad closest to the door that corresponds with your choice – left for Hive, center for Cabal, or right for Vex. If you guess correctly, you'll get a buff called Starhorse's Favor that will boost your ability recovery for a short time and give your character a crown made of light. Guessing wrong gives you the Starhorse's Penalty debuff that slows down your ability recovery. In either event, run through the door that opens and make your way through the obstacle course. The buff/debuff should run out by the time you get to the next arena. 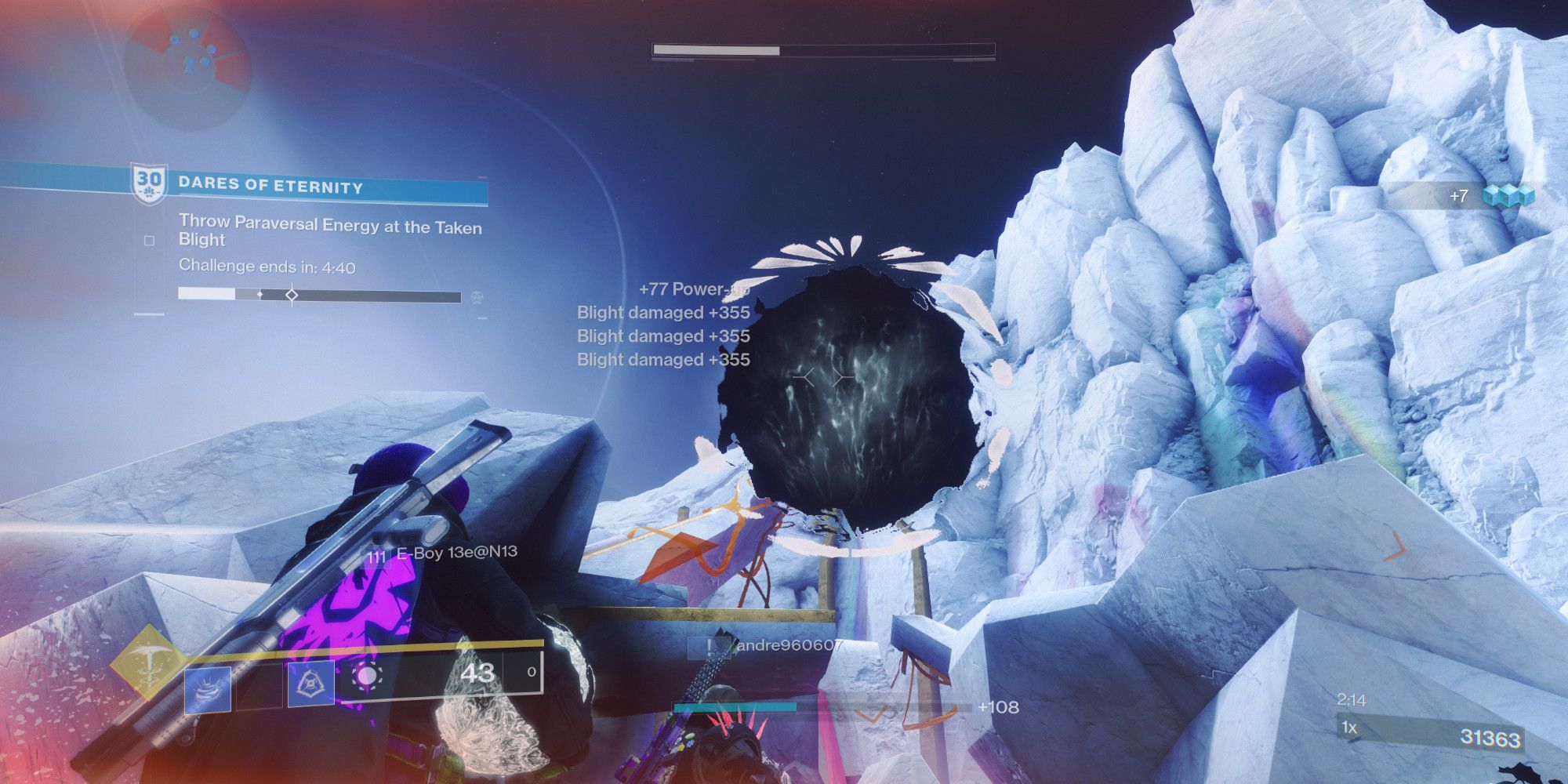 The final round is the boss fight. If you went through the Hive door, you'll be fighting two copies of Crota that can only be hurt by the cleavers that come from Hive elites. Kill enemies marked with the diamond icons then take their swords and attack either copy of Crota until it dies. If you went through the Cabal door, you'll have to kill a Cabal champion who will occasionally become invulnerable until your team kills 12 elite enemies called Siegebringers. When the champions shield generator goes up, you'll need to destroy a flying Thresher and throw its core at the generator to take it offline. If you went through the Vex door, you'll need to take down Zydron, a Vex that occasionally becomes invulnerable until you hunt down and kill its two Keybearers. Zydron will activate several Detainment Protocols throughout the fight, causing walls to move through the arena that damage anyone they touch. It will also trap players in containment fields. If you see a teammate trapped, shoot or melee the wall the free them.

Once your team defeats the boss, a chest will spawn and you can collect your prize. Sometimes a bonus round will start called the Lightning Round that rewards three extra chests.

What Is The Dares Of Eternity Lightning Round?

The Lightning Round is no different from the other second-phase encounters from each round. You'll need to defeat marked enemies to eliminate shields, deal damage to Blight, or capture zones to defuse Fallen explosives. Complete the challenge within the time limit to earn three additional chests at the end.

What Do You Get For Completing Dares Of Eternity?

Each successful completion of Dares of Eternity will reward you with Strange Favor, one Treasure Key, Strange Coins, and a piece of gear.

Strange Favor are reputation points for Xur. As you increase your rank, you'll gain access to new rewards from Xur as well as chests throughout Xur's treasure room that unlock new ghost shells, sparrows, and universal armor ornaments. 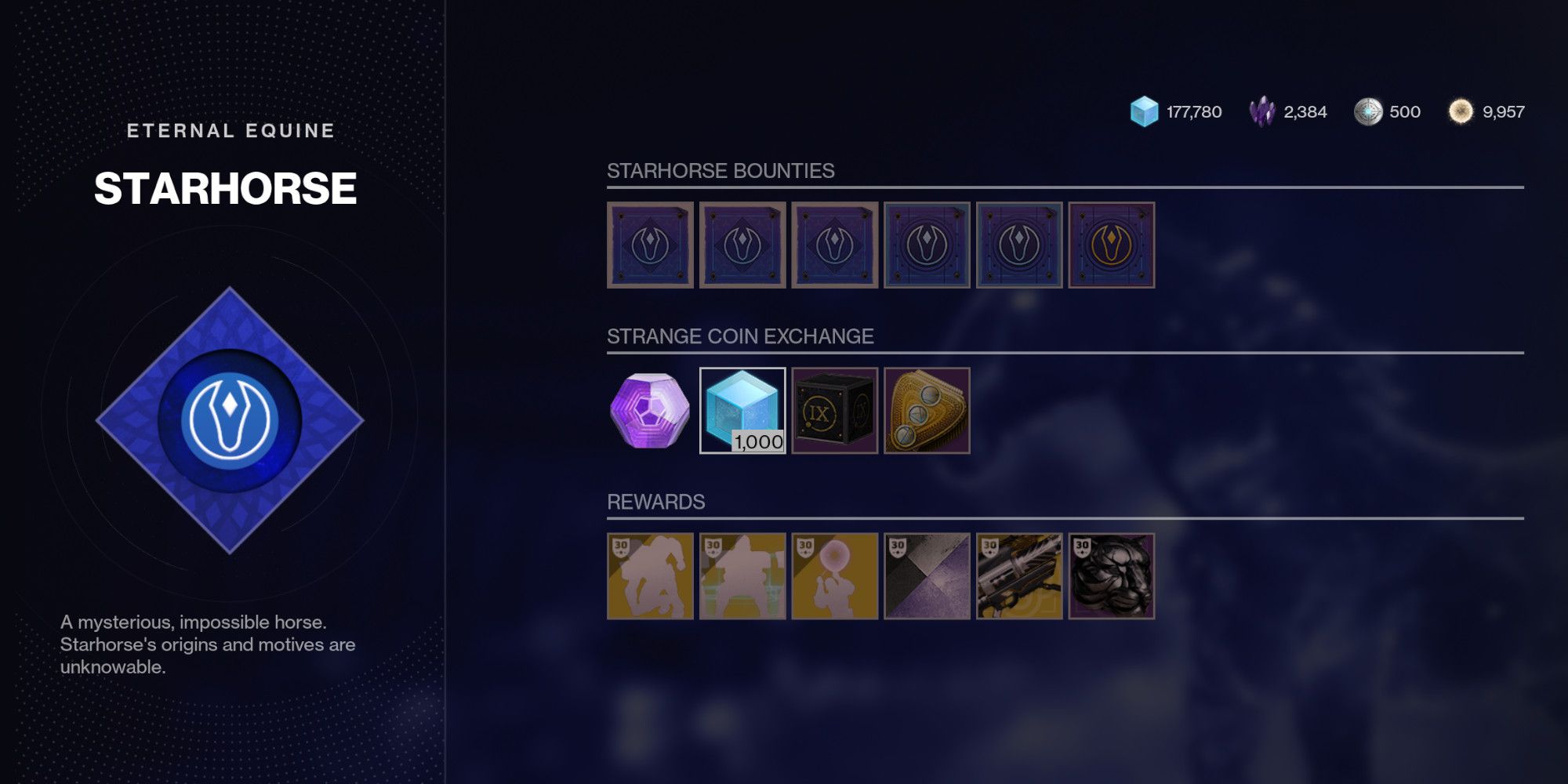 Treasure Keys open the chest next to Xur, which rewards weapons and armor new to the 30th Anniversary Event, as well as unlock the cosmetic chests in Xur's Treasure Room. Make sure you stock up on keys so you have enough to open the chests once you've gained enough reputation levels with Xur.

Strange Coins are a currency you can trade for bounties and consumables with the Starhorse. You can only hold one Starhorse bounty at a time and they must be completed in the Dares of Eternity. These bounties reward XP and Paraversal Haul, a container the rewards additional gear, keys, and Strange Coins.