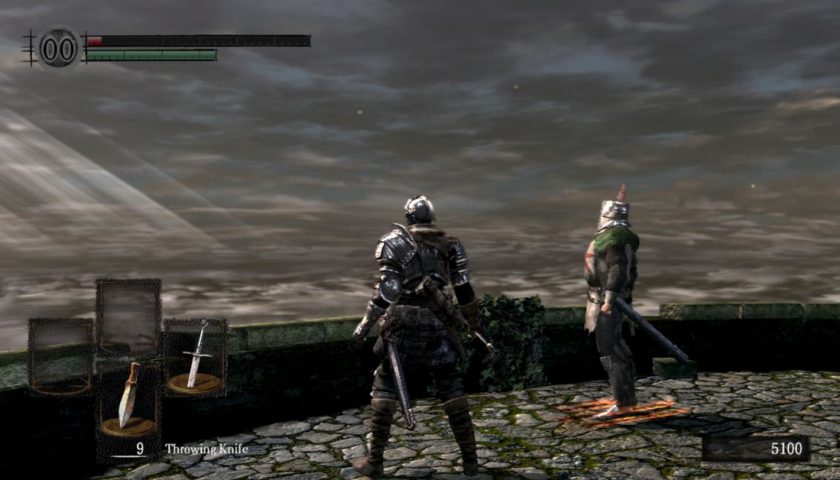 Learning to parry in Dark Souls requires an intimate knowledge of your opponent.

To learn when you need to press the parry button for each distinct enemy type, you will inevitably die, over and over again, because you hit that button either too early or too late. And so, learning to parry in Dark Souls is making an agreement with yourself that you are going to experience a series of specific failures, in the hopes that, eventually, you will have learned something.

The entirety of Dark Souls works this way, which you probably knew even if you never played it, because it’s nearly a decade old and has been analyzed by many critics since. I played some of Dark Souls and Dark Souls 2 several years ago — enough to understand that its grim world of armored skeletons was repetitious and grueling. I also could tell that if I had stuck with it, I would have found it rewarding, but that it would take a level of patience I did not believe I had.

In other words, I didn’t think I was the kind of person who could play a game like Dark Souls. It turns out that I am, but I didn’t discover that until this year, when I tried Dark Souls again in the midst of the pandemic and a deep depression.

I haven’t beaten Dark Souls yet, but I’m further than I’ve ever gotten previously (I just reached the Gaping Dragon), and like so many people before me who have depression and have gotten way into Dark Souls, all I can think about now is what Dark Souls has taught me about failure and resilience. Which brings me back to parrying.

For most of my journey in Dark Souls, I did not bother to learn to parry. I’m playing as a knight and I’ve used an axe two-handed for much of the game; parrying can’t be done with a two-handed playstyle. Eventually, though, I reached a unique enemy called Havel the Rock. You don’t have to defeat Havel in order to progress in the game, but I found him to be so irritating that I decided, one evening, that I would defeat him rather than running past him. I also decided that I was going to do it by parrying.

It took me three hours to learn how to successfully parry Havel’s attacks. For the majority of those three hours, I did not hit the button at the right time, and Havel could take down almost my entire health bar in one hit. After getting hit, I’d roll frantically and struggle to take a swig of an Estus flask before Havel managed to hit me again — which, invariably, he would, and then I would die. I would awaken at my campfire in Darkroot Basin, dust myself off, and run back to Havel, where I’d square up, get hit, scramble, get hit again, and then die … again.

In these moments, I’d often think to myself, “I’m never going to learn this,” and “Why am I doing this?” I’d wake up at the fireside and, sometimes, I’d just let my avatar sit there. On the other side of the screen, I’d sit there too. The two of us would contemplate what we had chosen to endure. Was it actually worth trying to learn how to do this? Was it even possible? Was I capable of learning to parry? Should I use some other strategy for beating Havel, since there are many? Should I stop trying to beat him at all?

If you fail in Dark Souls, there is nothing to do except try again. Or you can give up and succumb to the meaninglessness of it all. That existential dread is part of the scaffolding of Dark Souls’ world. Its characters live in fear of “going Hollow” — deteriorating into one of the hordes of shambling skeletons. Your character is already on a dark descent into this state at the game’s outset. Based on the way other characters describe it, the experience of going Hollow coincides with giving up, lacking motivation, and losing one’s humanity in both a metaphorical and a literal sense.

A guide to Dark Souls’ plot (in case you missed it)

The form of depression that I have in real life is similar. I describe it to most people as “sometimes I’m sad for no reason,” but there is actually a reason, which is the larger existential meaningless of absolutely everything that I do and that everyone does. At times, the sheer size of the universe and the pointlessness of any individual action leaves me in a state of emotional paralysis that is so extreme as to prevent me from accomplishing anything. Many years of therapy, meditation classes, prescription drugs, exercise, and any number of other tools in my arsenal prevent me from “going Hollow” in my day-to-day life, although the threat always looms.

Sometimes, it’s worse than usual. During a catastrophic event, such as a worldwide pandemic, my individual actions feel increasingly meaningless in the face of oppressive negligence on the part of systems much larger than myself. I nonetheless assure myself that my own actions have some value as I donate to food banks, participate in community aid efforts, and pick out increasingly optimized face masks for myself and my friends. I take care of myself so that I can take care of other people. I engage with art that matters to me, and I write and edit stories about that art, and I try to tell myself that these actions matter.

I will admit that I have experienced many days this year in which those actions felt pointless. And yet, I got up and I did it all, again and again. Sometimes, I could perceive some fleeting victory, some sense of connection — the one successful parry before I went down and woke up once again in the firelight of a new attempt.

I can perceive no larger meaning in the actions that I perform in Dark Souls. Sure, I’m trying to ring some bells, beat some bosses, and learn more about the strange world my character lives in. But the larger picture of what I do in the game remains unknowable to me and ultimately unimportant. The point is not the seven perfect parries in a row, or even the defeated mini-boss at my feet. The point is that I kept on walking toward Havel in between each one.

When I remember that these victories are so hard-fought, and so small, it feels bad. The real-life version is remembering to eat lunch, or to go for a walk, and then remembering to do it again the following day, and trying not to think too hard about how you have to keep on doing that, again and again, as many days in a row as you can, in order to feel OK. Not even great — just OK.

The big picture sucks. I’d rather not look at it. Dark Souls doesn’t let me do it, and that’s why it’s become my greatest comfort — an exercise in forcing myself to only evaluate a problem that’s right in front of me. Every single enemy must be approached with the same sense of care and patience. A long string of failures is also a long string of attempts, the evidence that I stubbornly chose to keep on caring, despite no grand reason for doing so. I choose not to go Hollow.