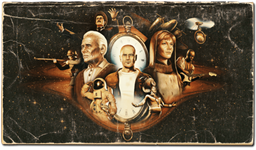 A couple of weeks ago M-Theory and Oddboy released the first in a series of videos detailing a key part of Wanderer’s mechanics, the watch that allows all the time-travelling adventures to take place. Today, the teams have released part two in the series, looking at upgrading and customising the watch.

Now, this is no ordinary watch, called Samuel, the device is sentient and will regularly engage in conversation with you. In this second instalment, M-Theory and Oddboy reveal that you can expand your inventory to carry more items by using an upgrade machine. There is a maximum of five slots to open up, only doing so by spending temporal shards collected on your journey.

And just to add a nice additional gameplay element there’s a puzzle to solve before the upgrade is completed. It’s not too difficult by the looks of it, rotating a series of cubes to make a path for a small, marble-looking object to pass through. VRFocus is expecting more puzzles like this, alongside travelling to the moon or attending Woodstock in the ’60s.

As for the customisation, you’ll be able to find certain objects that can then be disassembled and repurposed as funky housing for your intelligent watch. The video highlights a pack of crayons and a rubber duck, with the crayons adding a very colourful design to your wrist.

In Wanderer, you take on the role of Asher Neumann who finds Samuel the Watch and learns he has to save mankind by heading to key points in history. Originally, M-Theory and Oddboy were working towards a Q3 2021 launch window but that’s now been pushed back until later this year.

Wanderer will support PlayStation VR and SteamVR headsets – although the Steam page has yet to indicate which headsets – when it does arrive, with the PlayStation VR version also being made available as a physical edition. For continued updates, keep reading VRFocus.