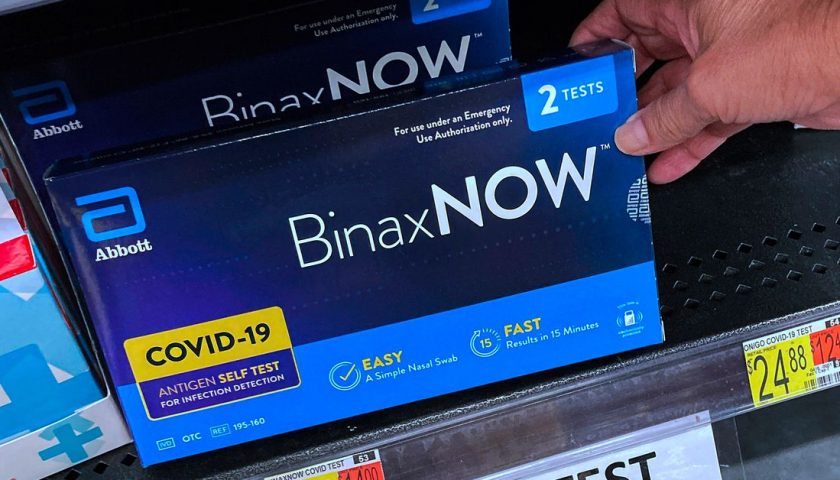 There isn’t an easy way for people in the United States to access COVID-19 tests. President Biden said in December that Americans will soon be able to order free at-home tests from a government-run website — 500 million tests will be available through that program, eventually. But in the meantime, Biden had a different suggestion: Use Google.

The Omicron surge — which has basically broken COVID-19 testing infrastructure in the U.S. — made testing even more difficult to access. Rapid antigen tests sell out almost instantly at stores, and testing facilities are continuously booked up, with some people waiting hours in line. The U.S. Health and Human Services Department estimated that the country could need 3 to 5 million tests each day by late January to early February. That’s millions more than the U.S. conducts right now.

Google simply isn’t working for a lot of people, who’ve been turned away by too-full testing centers and empty shelves. So people attempting to track down COVID-19 tests have found an unlikely “solution:” turning to video game console restock experts, who have begun tracking COVID-19 testing kits alongside Microsoft, Sony, and Nintendo hardware. Current-generation consoles like the Xbox Series X and PlayStation 5 have been in short supply since they launched in 2020, creating a culture of console tracking; Twitter users tracking restocks have gained massive audiences across social media platforms, simply by informing folks when consoles are in stock. The bleak scarcity of COVID-19 tests and the difficulty in acquiring them, echoes the culture of console tracking — but on a much more urgent need, caused by the country’s infrastructure failures.

“As I’ve always had a knack of being able to find some of these sought out products — I’ve had no issues in pausing our traditional postings to help others in finding PPE,” Josue told Polygon. “Due to my family experiencing COVID-19 and its harmful effects — I’ve heard their stories of having to wait long lines for testing, the lack of PPE during the COVID-19 surges, and how difficult it has been to obtain due to the overwhelming demand and its limited availability at retail and online.”

Accounts like Josue’s are required by law to disclose that they’re using affiliate links, which will give the affiliate partner a small commission per sale. That’s why you’ll see these posts tagged with #ad.

Other restock trackers have joined in, too: One of the biggest is @Wario64, a Twitter account dedicated to video game deals and restocks, which has more than 1.1 million followers. Video game deals are still most prominent, but it’s hard not to notice the COVID-19 tests between deals on Sega Ages Virtua Racing and a sale for Ori and the Will of the Wisps. It’s bleakly reminiscent of a headline that ran on satirical website Hard Drive: “U.S. Government Reaches Agreement With Wario64 to Announce COVID Vaccine Availability.” Wario64 did not respond to Polygon’s request for comment.

Josue of @ACPocketNews said there’s been a little pushback from Twitter followers that “question its relevancy,” to be posting COVID-19 test kits on an Animal Crossing fan account. “But [the majority of the responses] have been very positive and some have shared their stories and how difficult it has been for them to get [tests].

Co-op game Haven understands life as a couple during Covid

“I think we could all help in using our platforms to keep others safe, and providing visibility to resources that […] may not be easily accessible or known to the general public,” Josue added. They’ve also taken to retweeting links with helpful local information for followers.

Ryan, who runs the @PS5restocks_etc account with almost 150,000 followers, said that some followers don’t want to hear about COVID.

“But at this point I’m OK with them unfollowing,” he said. “The first time I posted COVID-19 tests, there was an immediate outpouring of gratitude from parents and families, and gamers looking out for their parents and loved ones. That’s more than enough reason for me to continue monitoring for COVID-19 test restocks. People who can’t go to the store for tests have to resort to online sales, and if tests can sell out in 5 minutes or less, it helps to have a person with experience tracking in-demand items looking out.”

For Ryan, it simply made sense to start tweeting about COVID-19 tests. He frequently monitors sites for PlayStation 5, Xbox Series X, and graphics cards, which he said he’s seen sell out in seconds in some cases.

“I’ve been tracking these in-demand items for over a year and with that experience, it really is no trouble at all to add another item to the list,” Ryan said. “I’ve seen the demand for at-home tests skyrocket yet again so I decided to start posting those restocks, too. COVID tests can sell out as fast as a PS5.”

PCR tests, which Vox called “the gold standard for diagnosing COVID-19,” are the tests administered by health professionals — the swab up the nose — and sent to a lab for results. A lot of places require these sorts of tests to clear someone to return to work or school, which is why these are so in demand. That’s led to an increase in demand for at-home tests, and while at-home tests aren’t as consistent as PCR tests, they’re still quite good. Like video game consoles before it, rapid tests have been targeted by scalpers, folks looking to make a profit off the test scarcity, but there are other reasons, too. For one, a ton of people are looking for them, and, according to Vox, “workplaces and schools bought many of the available rapid tests in bulk earlier this year.”

Simply put, it’s a mess that the U.S. was not properly prepared to handle. (You’ll likely remember that, back in December, White House press secretary Jen Psaki mocked a reporter’s question about free COVID-19 tests for all Americans. Several other countries, however, are offering free tests.)

“The pandemic has been difficult for us all,” Josue from the @ACPocketNews Twitter account said. “In times of need, helping others and stepping out of your regular postings to make sure everyone is safe is how we will all get through this. This is not just affecting one person — we’re all vulnerable to COVID-19, so let’s keep each other safe and encourage others to do the same.”