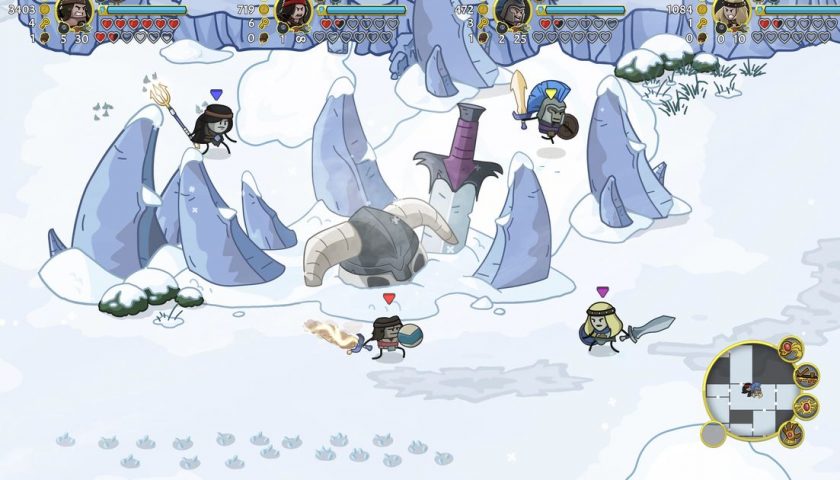 This cutesy cartoon hack-n-slash game is based on the classic Conan the Barbarian warrior saga and packs quite a punch of its own.

Far from being a soft kiddie game, this rougelike action brawler is one tough cookie and will keep you and three pals entertained for hours.

Your goal is to take down the mighty Thoth-Amon and prevent him from fully resurrecting Xaltotum.

Problem is you can’t get near the beast until you take down his four servants who act as bosses in each of the four zones of the game.

When you enter a zone, it is generated procedurally offering you a new layout and challenge every run.

So no matter how well you think you’ve memorised a level, the minute you’re killed it all gets a bit Returnal and nothing on that level looks the same again.

As you defeat enemies and progress you will collect gold and steelfire.

Gold can be used within the run to buy meat to restore your health or equipment.

And Steelfire can carry over and be used to buy additional equipment from the blacksmith on the next go.

The speed of the game’s combat is its biggest appeal and when there’s four of you on screen battling all sorts of baddies and monsters things can get incredibly hectic.

It plays well in the controller, with fast and fluid attacks all coming together nicely without too much button bashing.

Your weapons range from swords to hammers, bows and the use of charms to give you an edge over the enemy.

And the challenge is actually very difficult as the game is incredibly unforgiving if you mess up one too many times. You’ll need to learn to parry and defend with your shield as much as attack.

Death is a regular thing you’ll have to deal with in Conan Chop Chop.

The boss fights are massive after a slug-fest with the more normal enemies of the field and when the gamer tackles one there's a great sense of both of relief and achievement.

Local or online co-op is the best way to enjoy the game but you can play it solo.

I reckon most will get bored of it quite quickly without pals beside them in either real life or virtually.

All in, a fun but tough game.

One that rewards tactical fighting rather than attack-attack gameplay.

Not a great title for single-players but definitely easily pickupable gaming fun for one of those lighter evenings with friends.