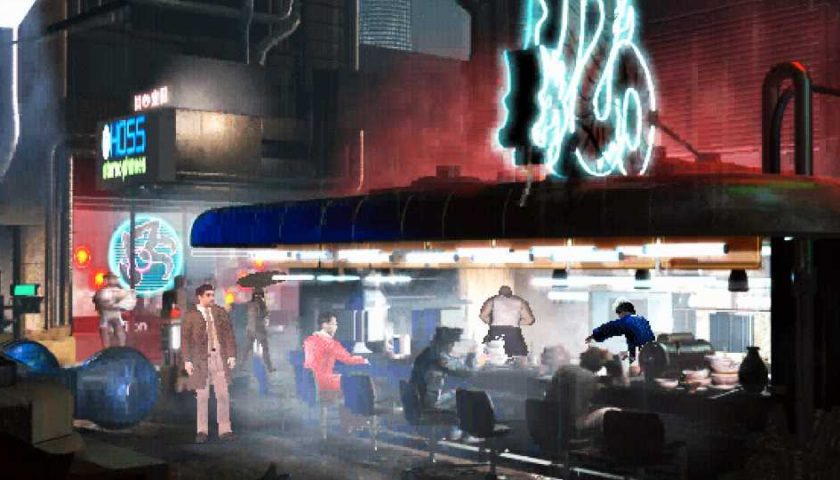 In the late '90s, the creator of Command & Conquer made a very different kind of game. Westwood Studios had made a name for itself as a master of the real-time strategy genre, but Blade Runner—based on Ridley Scott's influential 1982 film—was a slow-burning detective story that had more in common with point-and-click adventures. The studio won a bidding war for the rights to make the game, beating Activision and EA to the punch, and the result is a peerless example of translating the vibe of a movie into a video game.

Blade Runner launched exclusively on PC in the winter of 1997, and beautifully replicates the visuals, ambience, production design, and distinctive sonic landscape of Scott's rain-soaked tour de force. When I play it, I feel like I've been transported to the movie's evocative near-future Los Angeles. Alien: Isolation (also heavily based on a Ridley Scott film, funnily enough) is the only other game I can think of that equals it in terms of masterfully capturing not only the aesthetic, but the essence, of its legendary source material.

In the game you play as Ray McCoy, an android-hunting Blade Runner on the LAPD payroll who is the complete opposite of Harrison Ford's Rick Deckard. Deckard was a weary, washed-up veteran forced out of retirement against his will. McCoy, on the other hand, is a fresh-faced rookie with an eagerness and enthusiasm the movie's hero never had. They both wear stylish trench coats, wield blasters, and live in dimly lit apartments, but otherwise they're completely different people. McCoy actually seems to enjoy his job. 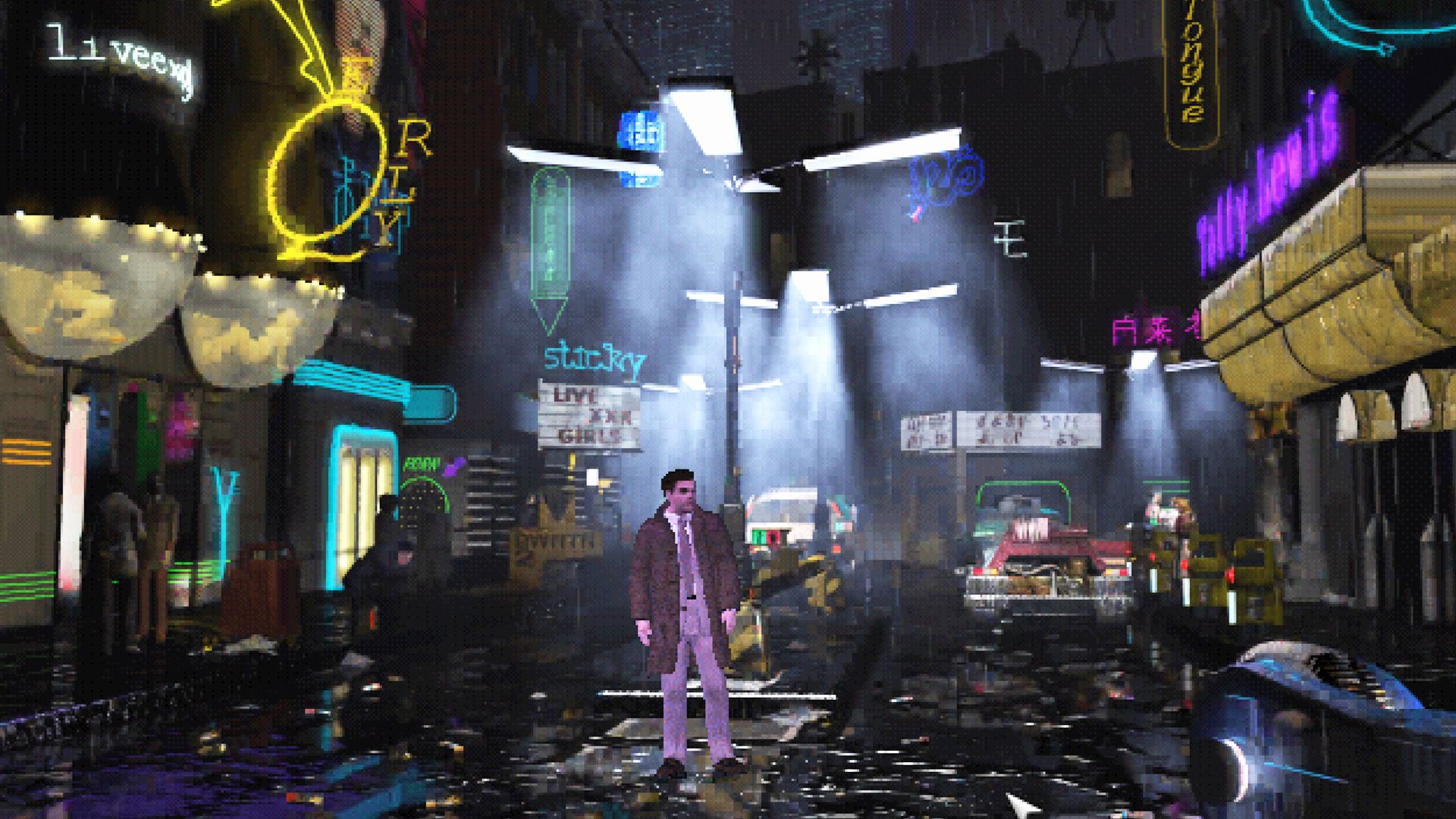 The game opens with one of the most severe crimes in Blade Runner's bleak vision of the future. The animals in an exotic pet store have been slaughtered, and in a world where most creatures are extinct, this is on par with homicide. McCoy is sent to investigate, and this crime scene is where we get our first taste of Blade Runner's detective gameplay. Interestingly, this is one aspect of the novel Blade Runner is based on—Philip K. Dick's Do Androids Dream of Electric Sheep?—that the game explores more deeply than the film.

In the book, Deckard owns an artificial sheep and dreams of one day having enough money to own a real animal. McCoy has a dog, Maggie, who he says cost him a month's wages. Whether she's real or not is left ambiguous, but that hefty price tag suggests she might be. There's also a reference to testing bone marrow to determine if a creature is real or not—another detail taken directly from the novel. The game is based almost entirely on the movie, but I like how Westwood managed to sneak a few callbacks in for fans of the book too.

The pet shop killers turn out to be replicants—synthetic biomechanical humans whose presence has been outlawed on Earth after a violent uprising on an off-world colony. McCoy is an officer with Rep-Detect, an LAPD unit dedicated to hunting these artificial people down and 'retiring' (read: killing) them. The game then shifts focus to McCoy searching for this group of rogue replicants on the dark, neon-lit streets of the city, and finding out what brought them to Earth. If that sounds a little too similar to the plot of the film, well, it is. 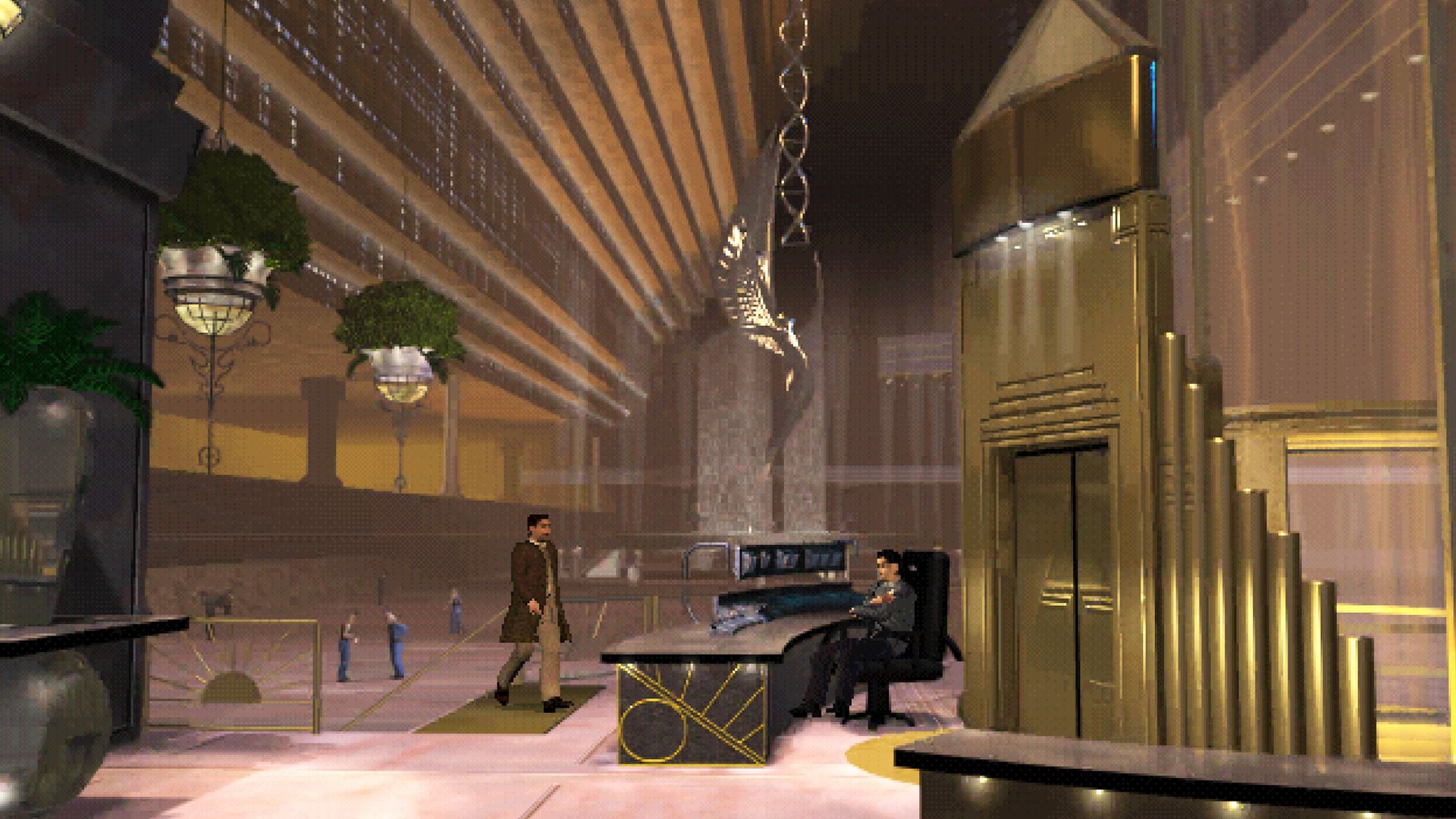 My only real issue with the Blade Runner game is how closely the plot mirrors the movie. Despite this being a huge, sprawling city, McCoy's investigation takes him to many of the same locations as Deckard. These include the Tyrell Corporation's headquarters, the Yukon hotel, JF Sebastian's creepy toy-filled apartment in the Bradbury Building, Taffy Lewis's bar, and Animoid Row. As a fan it's great getting to visit these locations—especially when they've been so lovingly recreated—but the narrative suffers for it a little.

Further linking McCoy and Deckard's investigations is the fact that they seem to be taking place at roughly the same time. When you meet with Tyrell, his assistant Rachael will mention "the other Blade Runner." Analyse a photo taken in Animoid Row and you’ll see Deckard in the background showing the snake scale he found in the Yukon to the fish lady. It’s a neat touch, and I love the idea of unknowingly brushing shoulders with Deckard as I explore the city. But it does highlight how unoriginal, and how much of a retread, the story is.

That's not to say there are no original environments in the game. You do get to see parts of the city that weren't in the movie, including a car dealership, an arcade, a nightclub, a new district called DNA Row, previously unseen sections of Animoid Row, and the aforementioned exotic pet store. To the developer's credit, these new locations feel like a natural part of the Blade Runner movie's universe, not new places dreamed up many years later. It's no mean feat replicating the recognisable aesthetic of a film like this, but Westwood nailed it. 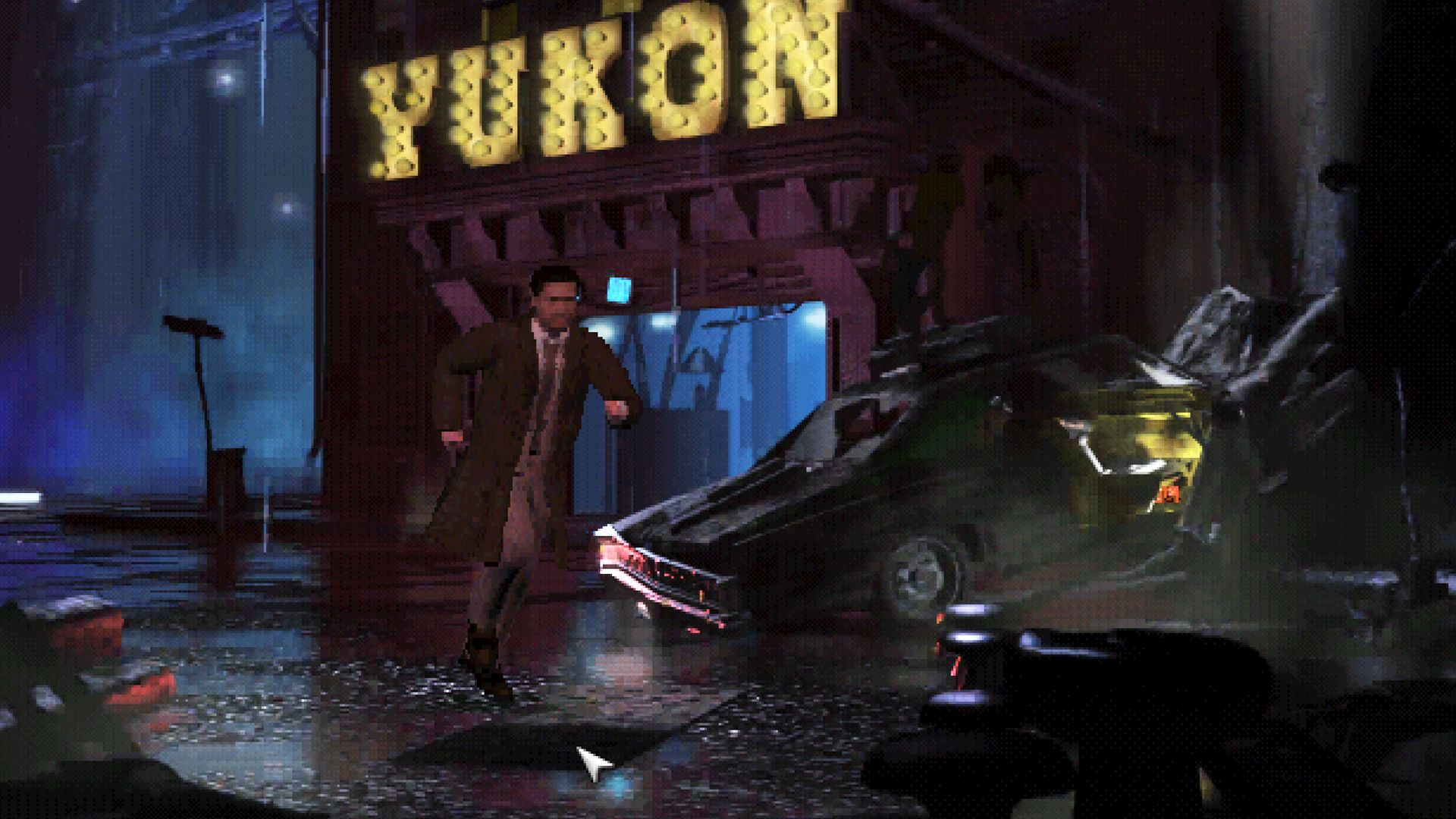 Some of the original cast even reprise their roles for the game, including Sean Young as Rachael, Brion James as Leon, James Hong as Chew, William Sanderson as JF Sebastian, and Joe Turkel as Tyrell. It's remarkable how Westwood managed to reunite these actors, 15 years after the film's release. But for whatever reason, they didn’t secure the rights to Vangelis’s stunning score. At least not the original recordings. But it doesn’t matter, because Westwood composer Frank Klepacki’s remakes are—a few synth sounds aside—near identical.

On a purely technical level the game is showing its age. But even with its fuzzy 640×480 pre-rendered backgrounds, Blade Runner still looks sensational. Every screen is drenched in atmosphere, and brought to life with animated details like blinking neon signs, roaming spotlights, backlit fans (a Ridley Scott favourite), and that endless rain that is so crucial to the movie's film noir-inspired ambience. Blade Runner is a wonderfully downbeat film, with a palpably gloomy atmosphere, and the game captures this mood perfectly.

As for the game itself, it's a pretty standard '90s adventure game, but with a greater focus on detective work than absurd puzzles and leaps of logic. It's less about combining random items, and more about finding clues, questioning people, and following leads. There are also missable clues, characters who can leave a location before you get a chance to interrogate them, and timed or randomised events, which make the game feel a lot more dynamic and unpredictable than most linear point-and-click games. 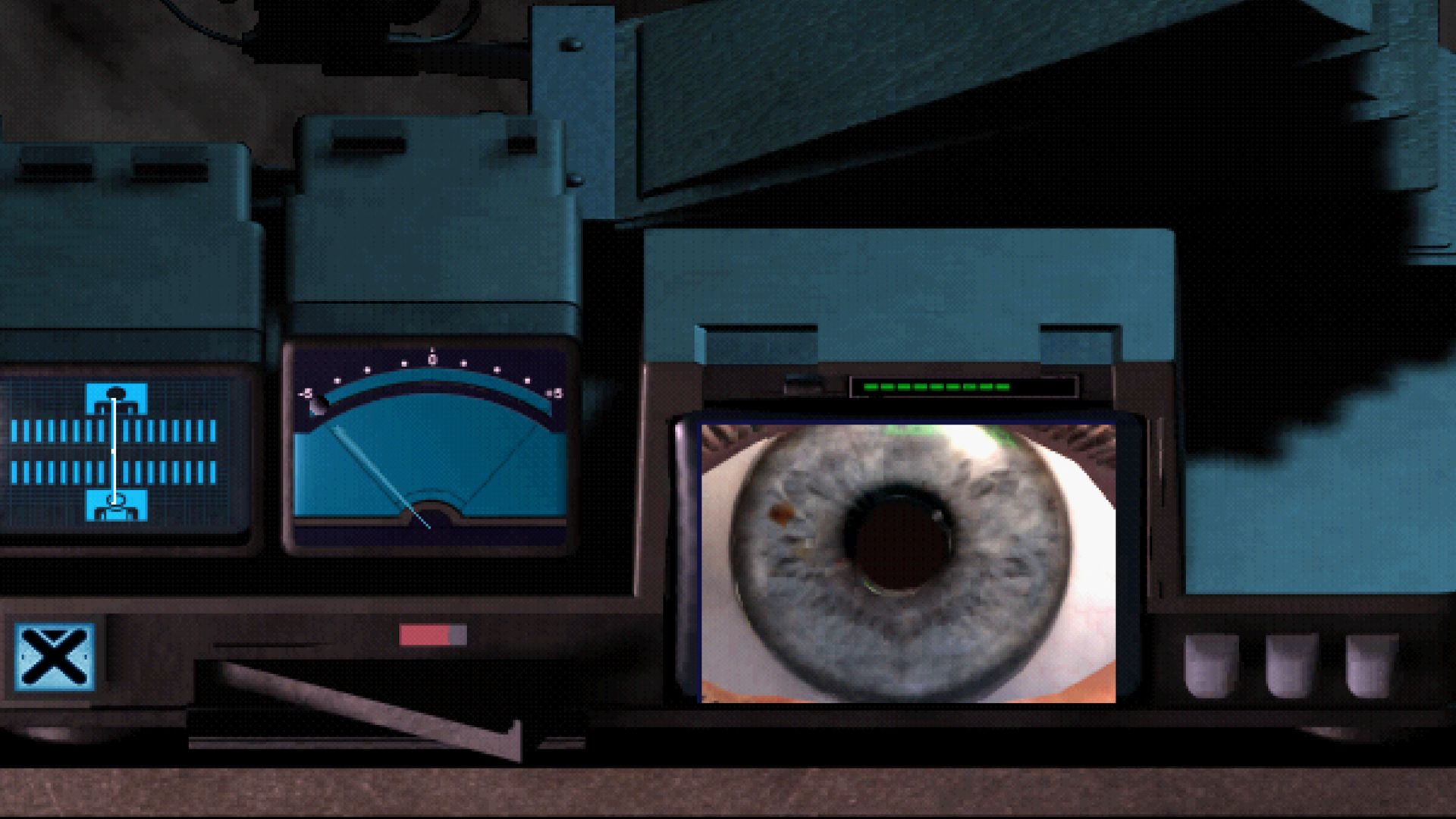 Brilliantly, Blade Runner randomly determines which of its main characters are replicants when you start a new game—including McCoy himself. In one playthrough a character might be a regular human, in another they're synthetic. This doesn't affect the story as majorly as you might think, but it adds an interesting wrinkle to the narrative. This also gives you a chance to get your hands on the film's famous, wheezing Voight-Kampff machine, and administer tests to people to determine whether they're real or not.

For years, getting Blade Runner running was a nightmare. But now, thanks to GOG, you can easily play it on any modern PC or Mac—and you should. Getting to explore these familiar locations, use tech like the Voight-Kampff machine and the Esper, and play the leading role in your own Blade Runner story is a dream come true for movie fans. For everyone else, it's just a quality detective adventure with an incredible atmosphere. A recently announced remaster has been indefinitely delayed, but it's fine: the original is still great.