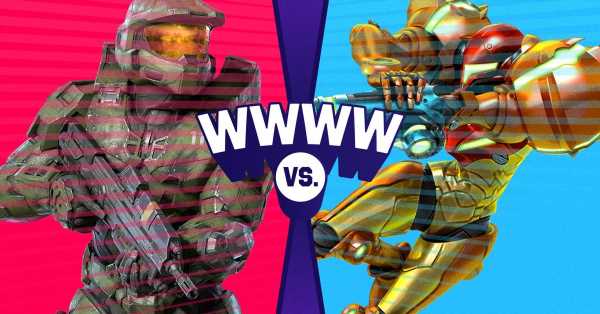 The internet loves to argue about who would win in a fictional battle, but sometimes, the debate can even be more interesting than the battle itself. With fan-favorite duelists Samus and Master Chief, it all comes back to a specific video.

One eternal question spans all of pop culture: “Who would win?” That’s why we’re dedicating an entire week to debates that have shaped comics, movies, TV, and games, for better and worse. Prepare yourself for Polygon’s Who Would Win Week..

People have always loved to compare Samus Aran and the Spartan known as Master Chief Petty Officer John-117 for two simple reasons: Metal suit and gun. That’s it. They’re both beefy badasses who blast their way through a sci-fi setting, while obscuring their faces behind a metal power suit.

But this feud between Master Chief and Samus also has its basis in an iconic bit of internet history. A fan animation “Haloid,” created by Monty Oum and posted to YouTube in 2007, imagined the two in intense battle — but with a twist that made a lasting impression. As a result, Master Chief versus Samus exploded into one of the biggest, most passionately debated fictional feuds out there.

We decided to look back and dig into how they actually shape up.

The 2007 cult classic video “Haloid” had a chokehold on the internet in the early 2000s.

The video is exactly what the title suggests — a mashup of Halo and Metroid, which starts with Master Chief bashing on a group of Covenant. Half machinima, half animated, Master Chief dunks on the Covenant in far flashier fashion than we’re used to, complete with early 2000s Matrix moves. Then once the super soldier has cleared out the Covenant, Samus arrives on the scene to tackle the Spartan. In a key moment, her armor gets shredded — but she continues to dart through the air, wielding her weapon, which looks equal parts whip and lightsaber.

After several minutes of cool, well-animated combat between our heroes, the Covenant return to interrupt the couple’s fight. The two then must work together to survive. Master Chief slashes with the energy sword, and Samus halves a Banshee with her weapon. As the Covenant crowds in, Samus blasts away with her Zero Suit pistol, and Master Chief takes off his chest piece and turns it into a bomb. As Samus flies Master Chief to safety, the screen fades to black, with the words: “I thought I was the only girl in armor … with the weight of the world on my shoulders.”

What’s this? Master Chief is also a woman? In the final scene, Samus removes Master Chief’s helmet, and the two of them embrace in a semi-erotic way, then the video rolls to credits.

It’s about the most early internet video a video can be — complete with simple animation and extremely unexpected fan-service. It’s also badass, and highlights the peak reasons fans love to imagine a battle between video games’ favorite metal titans.

Sadly, we can’t ask Haloid creator Monty Oum what led him to animate Haloid or showcase the fan war between Samus and Master Chief. In 2015, Oum died from a severe allergic reaction in Austin, Texas, where he worked.

We reached out to his former co-workers at Rooster Teeth, the studio behind Red vs. Blue (which Oum eventually animated on) and RWBY (which Oum created), to get a glimpse into Oum’s process and what made Haloid so special.

“We definitely became fans of Monty because of the Haloid video,” said Matt Hullum, chief content officer at Rooster Teeth. “That just blew up everywhere because it had so many fresh ideas and such a unique style. In that work, you can see all the things that make Monty one of a kind — his amazing command of action, his innate narrative skill, and his talent for peppering in fun, funny surprises.”

“Monty’s workflow was truly something unique and special,” said Kerry Shawcross, a writer and director on RWBY. “He would often start with key moments, whether it was a cool combo he had thought of or a dramatic beat he wanted, and then fill in between. It was a very organic process.”

Hullum elaborated further on Oum’s style saying: “He always said that his animation process was like cooking stir fry. He wanted to have a lot of great ingredients ready and the flexibility to throw them in however he wanted in the moment, instead of strictly following a recipe. Not many people have the talent to work like that and not get burned occasionally, but somehow he served up something great every time.”

That style is apparent in Haloid, with sequences bouncing back and forth between Chief and Samus. One section starts with the Morph Ball while another is all about rockets and plasma grenades. It’s a style Oum took with him when we went on to animate key action sequences in Red vs. Blue.

Haloid also helped escalate the mythos behind the Samus and Master Chief war. For all the ass kicking the duo do, they eventually leave the battlefield as equals. Oum sets up the question “who would win?” and then intentionally doesn’t give fans an answer.

So 15 years later, we’re going to answer “who would win” ourselves: Samus from Metroid or Master Chief from Halo?

So who would win, actually?

To dig into which of these heroes would come out victorious, we have to consider the worlds Master Chief and Samus come from.

The Halo universe is a bit harder sci-fi. It’s not without silly aliens and big globs of talking zombie goop, but the fights are with physical bullets, as well as UNSC spaceships, aircraft, and weaponry that appears more realistic to human engineering. It’s a story about a humanity that’s far enough in the future to have space flight but not far enough to be beyond war or gunpowder. Halo only really gets fantastical when it mashes the militaristic sci-fi with those silly aliens and their futuristic technology.

Metroid, on the other hand, is more fantastical. Samus Aran appears to be one of the only humans in this world. She shoots lasers from her suit’s giant gun arm that’s attached to her like Mega Man, she folds into a ball using what can only be magic, and she was raised by bird people. Her nemeses are a purple dragon that’s somehow smart enough to be captain of the “space pirates,” and a giant dinosaur that shoots thumbs out of his three unique belly buttons.

Over history, Samus has had the more powerful weapons in her arsenal: Tools to freeze and disintegrate giant, sentient brains in jars. Master Chief’s primary tool is improvisation on the battlefield, which translates into the ability to turn most battles in his favor. That’s great, and it makes for some extremely cool moments in the Halo series. But he doesn’t have anything to match a Hyper Beam.

In short: Samus is dealing on a more cosmic, technologically advanced level than Master Chief. In the war between Master Chief and Samus, Samus wins every time.

Even if we were to take the most contemporary versions of these characters and pit them against one another, Master Chief’s biggest innovation would be a grappling hook. Samus? She’s a straight-up Metroid hybrid lady with an unstoppable cannon. It’s not a fair fight.

Halo Infinite saves the series by finally doing something different

To bring it full circle, Haloid is actually the perfect tell on who would win this classic war. Oum animates Master Chief doing silly, ridiculous things that we’ve never seen him do before. It’s clearly over the top, and intentionally doesn’t fit the Halo-era action. But Samus? Her moves aren’t as unfamiliar. She’s not drop kicking enemies with Pelicans; she’s using her grappling beam, her arm cannon, her power bombs. Samus is operating at 100%, but Oum had to bump Master Chief up to 200% for them to really clash in an interesting way.

Two people aren’t necessarily a good fit to fight each other, just because they both wear full-body armor. Samus and Master Chief come from different worlds, and different levels of fiction. It’s like asking who would win in a battle between Captain Jean-Luc Picard and Chewbacca just because they both work on the bridges of spaceships in franchises that start with “Star.”

It’s time to let Samus and Master Chief rest until we can give them each a battle they deserve.