As Afterparty begins, Lola and Milo find their futures unexpectedly interrupted by the inconvenience of their own sudden deaths. They are dispatched to hell — for reasons unknown — which turns out to be a bit like a third-rate college town. They learn that there’s one way back to the world of the living.

All they have to do is out-party Satan.

This promising set-up launches Lola and Milo into a series of linear adventures that mostly involve dialog choices, with a few mini-games thrown in. 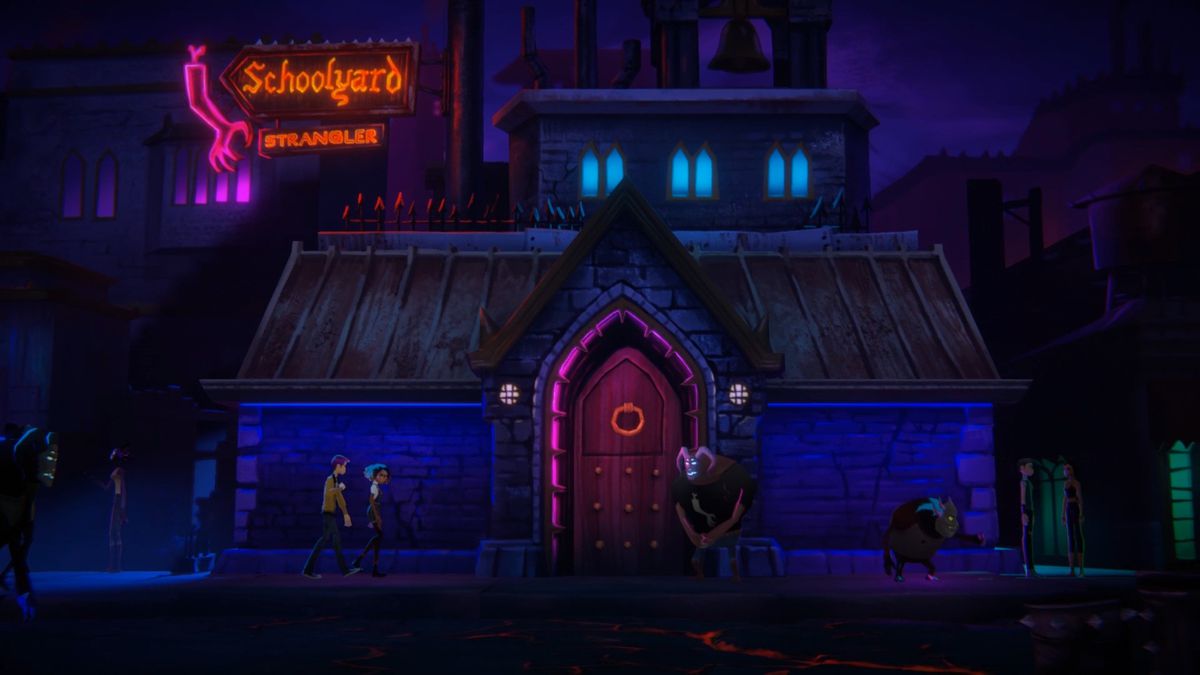 Afterparty was made by developer Night School Studio, which is best known for Oxenfree, a 2016 game that significantly advanced dialog as a gaming mechanic. Oxenfree is a game about teenagers who explore a mysterious island. Dialog choices happen in real-time, generally illustrated by dynamic speech bubbles that offer various choices.

Like Oxenfree, Afterparty leans heavily into speech-bubble gameplay, in which I choose from two, or three, potential verbal responses to any given situation. I can also influence the choices I’m offered by drinking powerful cocktails. A certain drink might give me flirtatious options, or turn me into a vaudeville jokester.

Verbal exchanges are often choices between being formally polite, evasively circumspect, a bit rude, or provocatively rude. These interactions trigger NPC responses that range from friendly, to malleable, to scathing. Despite divergent dialog moments, the story rarely wanders far from its central thread. The fun here is in subverting social situations, and prodding characters to see how they react.

Afterparty takes the bold and risky route of placing speech at the center of its experience. Oxenfree’s range of mini-game puzzles are as much a part of its experience as its dialog. In Afterparty, dialog is the dominant mechanic. The mini-games barely register, and hardly affect the story at all. Mostly they amount to simple, physical puzzles vaguely associated with drinking. One game is a version of beer-pong, in which I aim the ball into the cup like Angry Birds.

So Afterparty features a lot more chat than Oxenfree, but it also takes on the gargantuan task of being funny. Yes, this has been a good year for funny games, with the releases of Untitled Goose Game and Chuchel, but while those games rely on visual slapstick for laughs, Afterparty’s humor is almost entirely centered on the dialog.

This is an ambitious and laudable attempt to square the circle of merging video games with sophisticated, scripted humor. Alas, it’s only partially successful.

Lola and Milo are often funny. So are the side characters, who are wise-crackin’ demons. Unfortunately, they are also often not funny.

Sure, the writing is snappy, but the actual delivery of laughs is sporadic. While much of the dialog is recognizably comedic, it often feels like a background snark of mean remarks and put-downs that reduces to verbal noise. After a while, Lola and Milo’s sarcasm becomes tiresome. 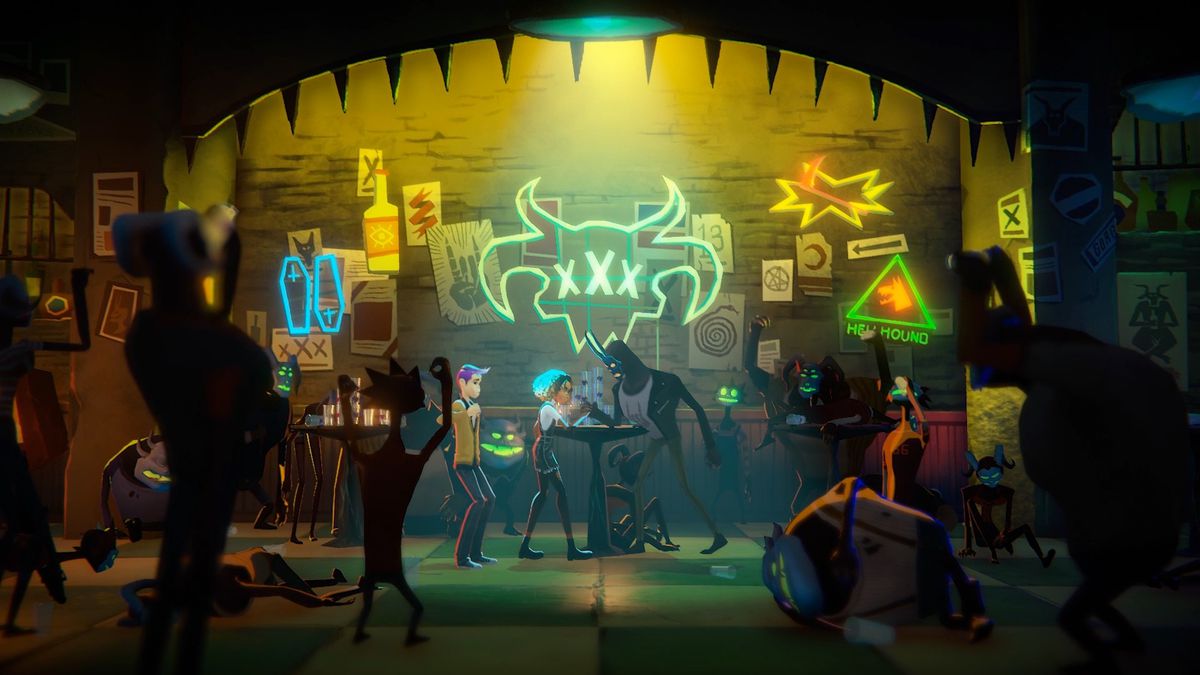 Still, there are laughs to be had. I loved this line from one of the Devil’s closest associates: “Yeah, Satan watched The 30 Years War like it was the freakin’ Super Bowl.” Another time, Milo recalls losing the family’s TV remote. “It was like I’d been caught hiding Nazis in the basement,” he says.

Sometimes, characters get into funny to-and-fro arguments which degenerate into single-word exchanges that cleverly reveal touching relationship dynamics. Cultural references and absurd archetypes of modern society abound. This is a game that wants to sound like an adult TV cartoon or a sophisticated sitcom, and the good news is that it sometimes gets there. The bad news it that it only sometimes gets there.

Unlike linear media such as television and film, games are notoriously unsuited to comedy, and the limitations of the form are on full display here. Famously, timing is everything when it comes to humor. Afterparty’s punchlines sometimes come with odd pauses, ruining the joke, because I haven’t quite maneuvered a character into the right place.

It doesn’t help that, as a modestly-funded indie game, Afterparty’s visuals are basic, and so lack the (expensive) human element of facial expression. Many of the characters are rendered as walking jack-o-lanterns, lacking distinctive features. They fail to stand-out against a gaudy backdrop of flames, lava and neon-sleaze. It’s instructive that the funniest NPC is Satan, who is rendered with a distinctive visual frame and is much larger than all other characters.

He’s also brilliantly voice-acted with a deep, self-loathing baritone that evokes Orson Welles. Indeed, much of the game’s voice-acting is wonderful, but sometimes fails to fully connect with comparatively primitive on-screen visuals. During the game, I occasionally find myself unsure who is actually speaking.

Even so, this is a game worth playing. Despite its shortcomings, Afterparty’s faults are balanced by a genuinely good story. Lola, Milo, Satan and other characters are forced to face their limitations and their (ahem) demons. As they grow, they re-adjust their expectations of themselves and of their relationships. Ultimately, it becomes a rewarding journey of redemption.

The whole thing is only a few hours long, with a well-wrought narrative that manages to rise to a satisfying conclusion.

Afterparty is an ambitious game that works hard to deliver funny dialog and outright laughs. And while it only partially succeeds in these laudable aims, it also delivers an enjoyable, unexpectedly worldly story about what it means to cease to be a child, and to begin to be an adult.

Afterparty is available on Oct. 29 on PlayStation 4 and Xbox One (including Game Pass), as well as on Mac and Windows PC via Epic Store. The game was reviewed using a final “retail” download code provided by Night School Studio. You can find additional information about Polygon’s ethics policy here.