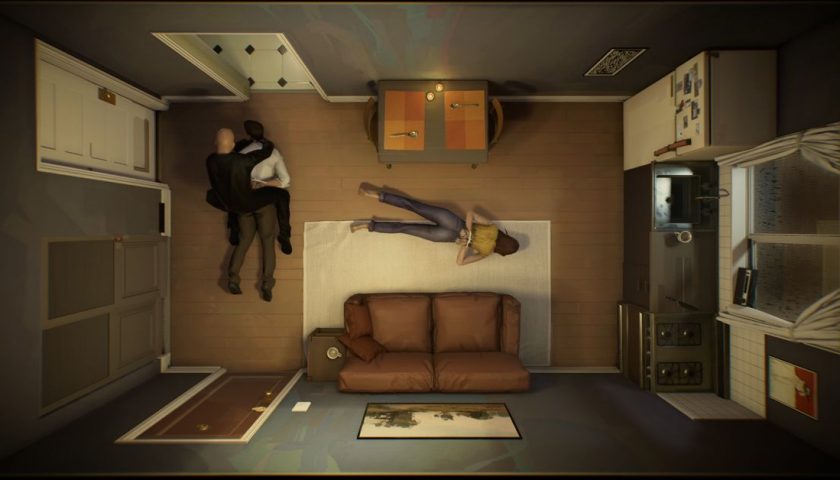 Twelve Minutes, the point-and-click adventure game that takes place in a time loop of the titular length, has been in development for the better part of the past decade — and it has been making appearances on “most anticipated games of the year” lists for almost as long. I first played it more than six years ago, at PAX East 2015, the first time developer Luis Antonio showed the game publicly. What started as a side project while Antonio was working on The Witness has since grown into a prestige indie game with a Hollywood voice cast and the imprimatur of boutique publisher Annapurna Interactive (What Remains of Edith Finch, Gorogoa, Outer Wilds). But in some ways, the final product — due out this year on Windows PC, Xbox One, and Xbox Series X, though there’s no concrete release date yet — will actually be simpler than the initial prototype.

“Since that prototype, it was a lot about removing things,” Antonio told me in a Discord call last month, after I had played two loops of Twelve Minutes (which, admittedly, is far from the optimal amount of time to spend trying out the game). Antonio has spent the intervening years refining the game, eliminating elements that he realized were superfluous.

The central conceit of the game remains unchanged; it consists of up-to-12-minute loops inside a one-bedroom apartment. The premise is also the same as it was in 2015: The player character comes home to his wife, who has planned a special evening for the two of them, which gets interrupted when an intruder assaults them.

Other aspects of Twelve Minutes have evolved. The three characters don’t have names anymore, partly because Antonio wants you to “impart your own values” on them. The décor of the apartment is meant to be timeless, or at least, the place is designed in a way to prevent it from feeling like a period piece. And there are no longer any clocks within the environment, because Antonio found that players gain an instinctive sense of how much time has passed once they’ve completed a few loops. While there is still a clock in the pause menu, it shows only the minute hand, not the hour. All you know is that the game takes place at dusk.

“It’s about the repetition of time, but the time is not what’s important here,” said Antonio. The lack of any in-game clocks, according to Antonio, forces you to “hold more in your head, rather than relying on the game.”

Twelve Minutes is analogous to Mobius Digital Games’ time loop game Outer Wilds in that the player and the game’s protagonist can increase their knowledge with every loop. Whereas Outer Wilds’ spaceship features a computer that logs each new discovery, Twelve Minutes’ dialogue changes to reflect new loops and events. After my very first loop, a new option appeared in conversations with my character’s wife: “Tell her this feels like the same day.”

Then I had the more difficult task of actually convincing her that something weird was going on.

At that point, I had to figure out which objects in the apartment would be likely to trigger a line that would prove I was reliving this day. Anything you can interact with will be highlighted with a pop-up of its name that appears when you mouse over it. Certain items, like keys, will go into your inventory, and you can drag them onto objects in the world where interactions involving them make sense.

First, I clicked on a spoon lying on the dinner table, since my character’s wife had told me during the first loop that she had prepared dessert for us. No dice — she had apparently mentioned her evening plans earlier that day. Then I tried the mug on the end table, which I had previously filled with water for her, but that just led to a come-on about being thirsty … for me. Of course, as I was going through the possibilities, I knew I was literally on the clock: The intruder would be knocking on the door any minute now.

With every fail state, you’ll learn a bit more about the game’s own rules and logic. In my second loop, I spent a bunch of time arguing with my wife, insisting that she not open the door when someone knocked on it. She eventually agreed — but the guy simply burst into the apartment. Why? “You didn’t lock the door,” Antonio pointed out, as I sheepishly nodded my head. (Not that locking a door is guaranteed to keep people out, as you can see in the gameplay video below.)

Twelve Minutes plays out in 12-minute loops, but Antonio has said that he expects the average playthrough to run for six to eight hours (although play testers have spent as much as 20 hours exploring the game). It’s going to take some time for players to get their bearings, try a whole bunch of things to see what happens, and unspool the threads tying this story together. And that’s when things will truly get interesting.

“The real exploration is from the middle to the ending, when you’re in control of the situation and the game doesn’t tell you what to do,” Antonio said.

It’s very easy for a game like Twelve Minutes to fall apart if something breaks your immersion, such as objects or interactions not behaving logically. This was particularly vital with the dialogue, which is why Antonio — who hails from Portugal, and for whom English is not his native language — said he hired “proper screenwriters” to touch it up. And the importance of the script is why Antonio felt it was crucial to have voice acting in the game, which is the most significant element of the experience that did not exist in the prototype I played all those years ago.

Twelve Minutes hinges on players believing that its characters are thinking, feeling human beings, according to Antonio. To that end, the actors lending their voices to these characters — James McAvoy as the protagonist, Daisy Ridley as his wife, and Willem Dafoe as the intruder — were recorded together (in pairs, since dialogue sequences in the game only play out between two characters at any time).

“Once the characters got more fleshed out, there were a lot of nuances in how they talked to each other,” said Antonio, adding that both dialogue recording and motion capture allowed the development team to discover “little opportunities to make the experience richer.”

Some of that nuance comes from Antonio’s own feelings about the way people speak in everyday interactions; he believes that we tend to use language that seeks to blame people and condemn them for their actions. And he wanted to keep that out of Twelve Minutes.

“There’s no bad character in the game,” Antonio said, noting that even the intruder has his reasons for doing what he does. “Any judgment will come from you.”