Every time I begin to enjoy Rage 2, it finds a new way to treat me like shit.

There’s a lot of individual bits I’ve liked in Bethesda’s new post-apocalyptic shooter, created by the open-world geniuses at Avalanche Studios and the gunplay experts at id Software. And I have no doubt we will be unpacking what makes its open-world click in the coming days, if not weeks. But never has a game so personally, directly bummed me out.

I should have seen this coming.

Just because a developer listens, doesn’t mean they hear us

Last summer, I had a chance to talk with id Software studio director Tim Willits about Rage 2. After a relatively straightforward interview running through the game’s grabbag of inspirations, the conversation shifted to something more personal: my birth defect and how the game presents it as a crude joke.

Rage 2’s publisher Bethesda had just revealed a $119.99 collector’s edition that would come with a talking, robotic bust of Ruckus the Crusher, one of the game’s many goliath mutants. Like all the other Crushers in the game, Ruckus has a gash running from the top of its upper lip through his nose, as if its face didn’t fully form at birth.

The mutation, I explained to Willits, looks like an exaggerated cleft lip and cleft palate. The original Rage used similar imagery for its mutants, and I told Willits how disappointed I felt to see the sequel following that same path. Fiction has long associated clefts with both villainy and mental health disorders, and it appeared the Rage franchise would perpetuate this cruel, damaging misrepresentation to a broad audience.

Willits, to his credit, was receptive to the feedback. Here’s the relevant portion of our interview:

Tim Willits: So you feel that it’s a little insensitive?

Plante: Yeah. It makes me a little uncomfortable when it’s always the bad guys that have the upper lip and nose removed, effectively.

Willits: You know, I never really thought of that. I mean, you know, we try to make — you know, Kenneth Scott was our art director on Rage 1, and yeah, I mean I kind of feel bad now. Sometimes it’s hard when you — you don’t live in that world, so you’re like, ‘Oh, these guys …’ So I apologize. And you know, yeah, I’ll talk to the guys.

Plante: Sure. Are mutations normal for the heroes, too, in this version of the game?

I’ve now played a significant amount of Rage 2, and I have to wonder if Willits forgot to have that conversation. Or if that conversation was had, was it closer to a cost-benefit analysis: will enough potential players be upset to warrant the investment in improving these character designs?

I can now say with certainty that “the Avalanche guys” have not been “very good about being a little more sensitive.” Or perhaps Willits meant “little more” in a literal sense. As in they have made the smallest effort.

Rage 2’s use of cleft lip and palate imagery in the final game is worse than I expected, and certainly worse than its predecessor. I already mentioned the The Crushers, who are both recurring bosses and environmental hazards, each of them with an identical facial design. 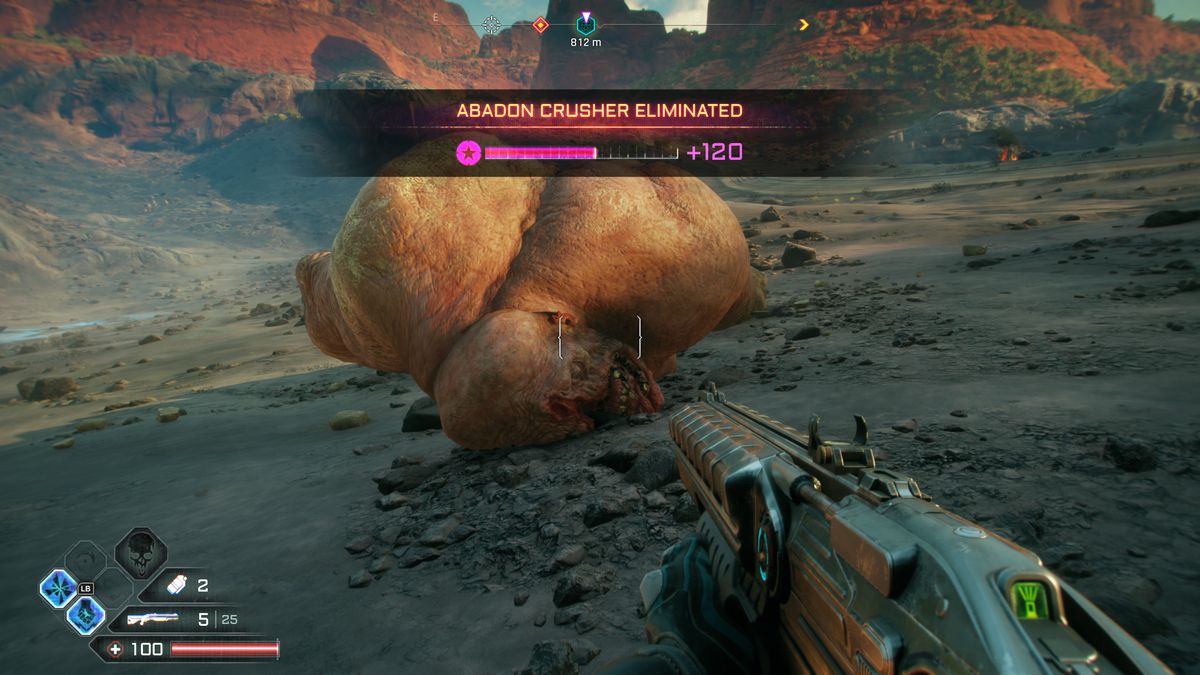 I made peace with the Crusher design months ago. I hate it. It’s awful. But I understand the crass reality of it all. Long before last summer, Bethesda leadership felt that Crusher could be for Rage what the silly Claptrap is for Borderlands, a clear inspiration for the series. A mascot of sorts, a visual icon for the entire series. They’d already greenlit that crummy Big Mouth Billy Bass knockoff collector’s edition. The die was cast.

And besides, I thought before diving into Rage 2, how many times could they use this cleft imagery in one game?

A lot, it turns out! The cleft is used with such frequency that it feels like a visual cue: The exaggerated cleft signifies the most mutated of mutants, subhuman beasts that are caged, ridden like horses, or mounted like animals.

Early in the game, I meet a scientist riding a humanoid beast. The creature also has a cleft lip, this one less exaggerated, more like my own at birth. The creature is covered in its own drool, a straw hanging from its mouth. There’s a certain Total Recall Kuato schtick going on here between the scientist and the creature, but one thing is clear: the beast is meant to be a freak. The intention is for every player to be repulsed. 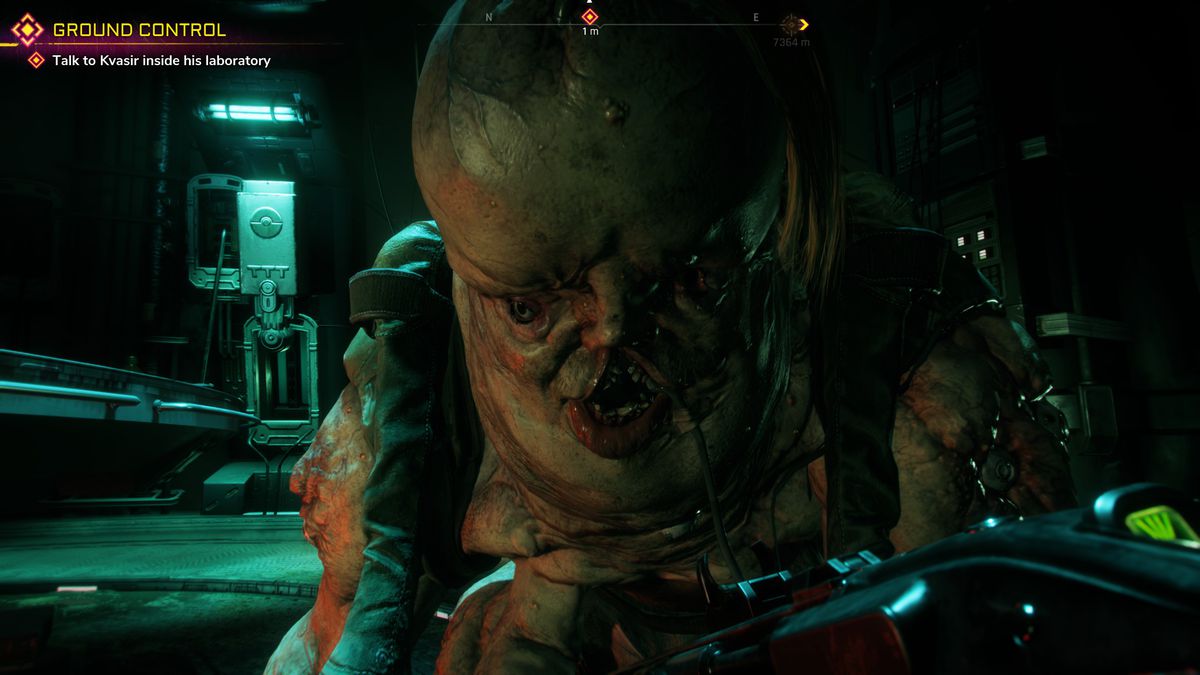 On some level, Willits told the truth when we we last spoke. The good characters aren’t as “pretty” as they were in the original Rage — though most of the women in the game easily fall within that realm. But their designs aren’t thoughtful or interesting either. The artists depict the spectrum of weight and age with the grace of a Mad Magazine cover.

When I spoke to Willits last summer, I came away from the conversation optimistic. Here’s what I wrote a few hours after that meeting:

I recognize I have the rare opportunity to actually speak to creators in person, that there isn’t a better means for other people outside my position to have this experience. And I recognize that people of other backgrounds have for decades had to play games that treat them as targets — and that they still do. But for a moment, I felt a surge of optimism. If developers can be open, if they can make efforts to find other voices rather than wait for those voices to come to them, then everyone could feel welcome to play the hero, rather than be forced to spot themselves as the villain.

That optimism is gone. I suspect there could be a later game character that serves as a counterpoint, that the Crushers have hearts of gold and have been weaponized by humans, that there’s some text log hidden in the world that explains the designers good intentions. But that assumes I can last another dozen hours in a wasteland that makes me miserable.

Midway through my time with Rage 2, I sprint through a sticky night club — one of those forgettable video game environments that transitions the player from one big action set piece to the next. It’s the sort of generic area you see the same art asset on the wall a half dozen times because, hey, the space isn’t a huge priority. The mounted bust of a mutant in Rage 2.
Avalanche Studios/Bethesda

On its wall, instead of posters, hang a series of identical mutant busts, all with the same exaggerated cleft. This isn’t a Crusher or the scientists’ beast, and the asset, while custom, is not central to the game. Now I’m no expert in game design, but I feel confident saying these busts could have been removed with minimal time and effort. It wouldn’t have required canceling pre-orders, delaying development, or halting production on novelty special editions.

But here it is anyway. Another mutant with a cleft, letting me know this one is truly subhuman, so far from the other humans that it can be mounted like a hunted animal. It adds the tiniest environmental flavor for some players, but makes others feel like absolute trash.

So much for a “little more” sensitivity.