It seems unfair to the game and its developers, but it’s hard to evaluate Pro Evolution Soccer outside of the context of EA Sports’ FIFA series. But it’s also the most favorable light in which one can view eFootball PES 2020, a formidable, strong-playing rival that has thrown some sharp elbows in a licensing game dominated by the bigger publisher.

Deep inside PES’ machinery is, once again, a stronger and more challenging game of football, though it does expect some familiarity with the franchise’s systems, or a long re-acclimatization to them (I was the latter). Something seemed … off about the pace of play, which slows down players somewhat but really made passing and shooting feel clumsy. Then I realized that PES 2020 has subtly woven in mishits to both systems, and it’s not just a dice roll tied to a player’s attribute ratings. Whether I’m facing a passing target (or the goal) or how fast I am moving with the ball make both tasks a lot less certain.

This plays to PES’ long-standing strength: that it’s a much more thoughtful soccer experience that rewards player spacing, deliberate passing and rock-hard focus, and informed decisions on both offense and defense. You can skirt these expectations at lower difficulty levels, but why would you? Play FIFA if you want nine shots on target and an easy 9.0 match rating for your best player.

My standard for a sports video game that isn’t my strength is whether a stripped-down, basic approach — none of the right-stick razzle dazzle of NBA 2K or NHL, in other words, just solid ball movement and pressure defense — can still deliver victory. It can in PES 2020, provided I show the game a lot of respect in how I care for my scoring opportunities and respond to the AI’s. But there is enough sizzle in the right stick, contextually applied (unless the player is trained up in a specific trick using that stick) to create separation against weak defenders, too. That in turn calls attention to the game’s stronger clubs, whose defenders can’t be broken down with simple feints. 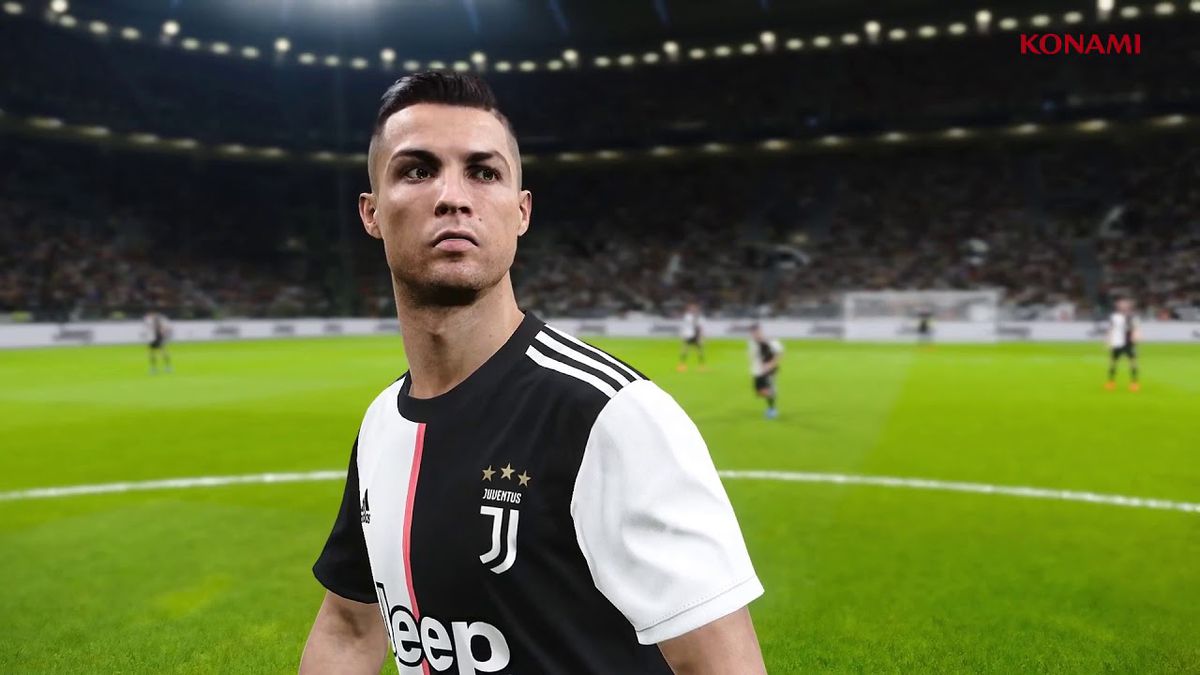 One year after anchoring FIFA 19’s box cover, Cristiano Ronaldo is on a club — Juventus — that is exclusive to PES 2020, forcing EA Sports to put a ringer name on a big club for once.
PES Productions/Konami

They’re easier to break down, though, when they’re the ones feeling the pressure of a late score. The first fixture of my Master League career, with Serie A’s Lazio against Juventus in Italy’s Supercoppa, I managed to score around the 75th minute (which itself seemed divinely inspired, a high cross to a no-doubt-about-it header). Now Juve was concerned, pushing hard into my defense but similarly exposed to a counterattack — making the second goal (a simple through-ball to the center of the field) seem easy by comparison. I’d like to think this is how an elite side loses 2-0 in real life, too (although Lazio is not a garden-variety club, either).

For comparison, I picked up sentimental favorite and recently promoted Hellas Verona to see if I could get the result in their Serie A opener. Nope. This is around the time I realized what the game was doing with its passing and shooting, especially for middling players. If headed shots on goal are more viable, then other volleys are less so, even at angles I felt like I’ve been able to make in the past. Just messing around in the game’s tutorials and blowing clean shots will demonstrate this. My player’s momentum and direction matter a lot more, or at least give the game more reasons not to place my shot perfectly.

There are some other under-the-hood things that, in retrospect, inform the more distinctive play in PES 2020, match to match. Some players have an “inspirational” quality to them — meaning teammates in the area get more involved, either going on runs through the defense or coming over from the wing instead of waiting, and the standard AI plays rather passively without this (most on display in the single-player Be A Legend mode, which received no discernibly new features or improvements).

Again, while I appreciate the differentiation, all of this stuff is buried deep inside the menus and other reports on your own players, such that you need to scout your own team as much as the opponent until you build up enough familiarity at the end of a season. PES 2020’s menus are no fun; they rarely explain themselves or highlight important information, making such preparations feel tedious and chorelike as opposed to the realistic obligation of any winning manager. The game assumes you know a lot already — about it, about the team, about its real-life strengths and weaknesses (not just their reputations). It’s still playable for newcomers early into a season or a career, but until I complete a Master League season, I’m probably going to feel like I’m missing some key strength or player through which I should really be running my offense.

PES 2020 is one of those iterative works that doesn’t show major changes or shiny new features in its core modes, instead deriving most of its improvement from better gameplay that serves all areas. MyClub remains a more sedate and proportionate response to FIFA’s Ultimate Team, with a focus on developing players long-term as opposed to opening pack after pack. The mode also smartly presents the odds of getting a player through the “agent” you use to sign them — in MyClub, an agent is effectively a marker, earned through play, to get a player at a particular position. There’s still a surprise mechanic (there’s that term again) in finding out who the agent signs. But if the mode overall is less flashy, less stimulating, then it’s also not as money-grubbing as FUT. 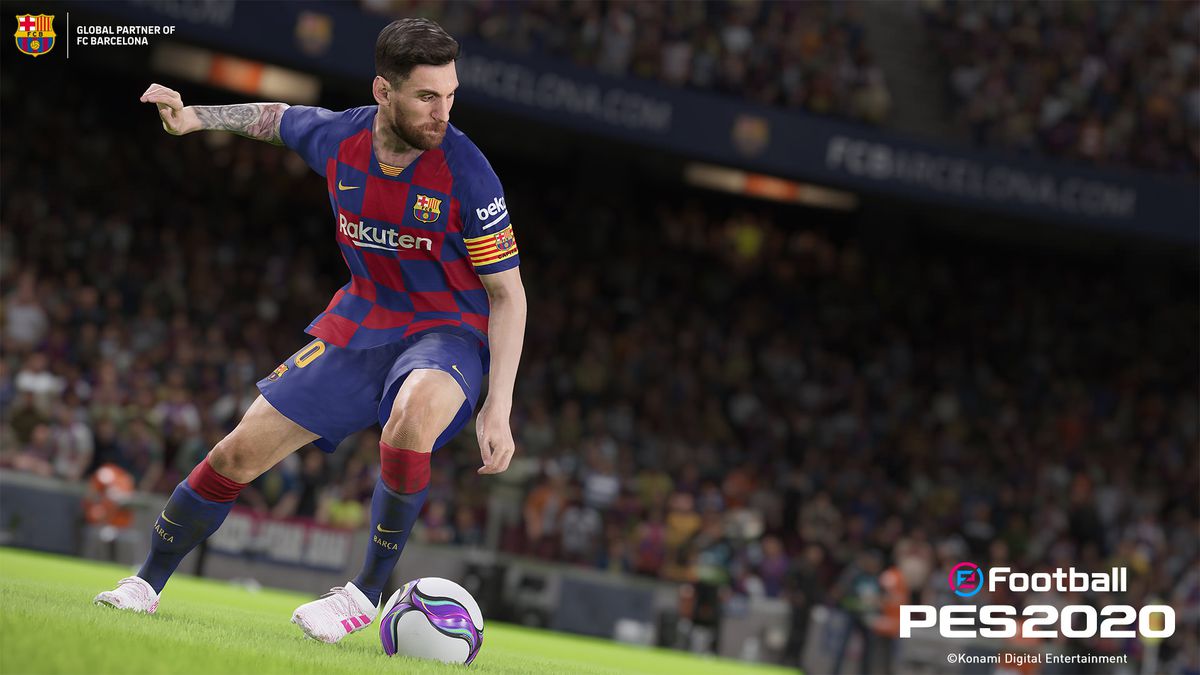 Now in his 16th season with Barcelona, Lionel Messi is still a considerable presence both within, and over, Konami’s PES franchise.
PES Productions/Konami

It’s also encouraging to see that Konami is still committed to licensing, as much with deals for big-name clubs (Juventus, Manchester United) as whole tournaments like UEFA’s Euro 2020. EA Sports has, over the years, added in official branding for Italy’s top division, taken over the Champions League, and made modest progress in adding Brazilian and Argentine clubs. But a cost-conscious, franchise-mothballing Konami is stubbornly sticking with its soccer project despite the skin necessary to stay in this game. Forcing EA to call Juventus “Piemonte Calcio” is a huge coup, and feels like payback for every “Merseyside Blue” or “North East London” that PES has been stuck with over the years.

As to that, while Manchester United and Arsenal remain the only licensed Premier League clubs in the game, PES 2020 has actually gotten bolder about what it names its ringer clubs, though English football fans will still likely download and apply user-created names, kits, and the like (and on console, can do so only with the PlayStation 4). It’s kind of a subtle thing, but it is striking to see Konami fighting for any game after bailing out so comprehensively on its biggest names over the past four years.

And PES cognoscenti — there still are many — have a game that is again worth the fight. I know that to sit down for a PES match is to be challenged as much in my thinking about soccer as in my ability to play it as a video game. Pro Evolution Soccer’s best quality is also its dirtiest secret: It makes me a better FIFA player. eFootball PES 2020 doesn’t make me forget about its competition, but it does force me to reckon with what I really want from a soccer video game, and who really meets those needs.

eFootball PES 2020 is now available on PlayStation 4, Windows PC, and Xbox One. The game was reviewed using a final “retail” PS4 download code provided by Konami. You can find additional information about Polygon’s ethics policy here.