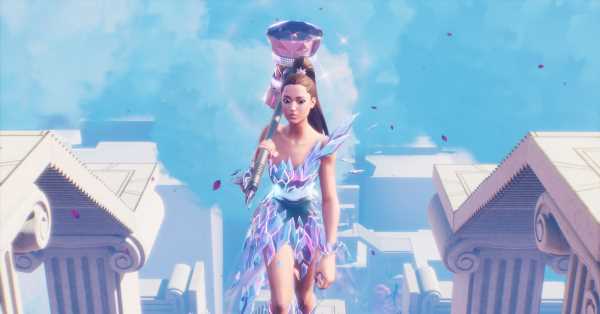 Pop star Ariana Grande has come to Fortnite, and with her arrival comes a much-needed dose of glam.

Grande descended onto the humble Tomato Town for a virtual concert, and with her, she brought a set of aesthetic items for players to purchase. Fans had the opportunity to buy two Ariana Grande skins — each of which rocked her iconic high-pony — and other battle items like a sparking glider and a diamond-like hammer.

While Fortnite is already known for being whimsical, Grande’s arrival brought a renewed sense of excitement to the game. Grande has an enormous fan following; currently, she’s the most-streamed female artist ever, and 71 of her songs have charted on the Billboard Hot 100. The near-ubiquitous nature of her celebrity also seems to have piqued the interest of a wider audience of players.

“It was great to have a really well-made skin for the girls and the gays,” Gil Cruz told Polygon over Twitter. Cruz identifies as a member of the LGBTQ+ community and bought the Ariana Grande skin after seeing it announced. Previously he had bought the Lara Croft skin, but nothing before that inspired him to spend money in the game. Cruz told Polygon that while obviously any skin can be used by anyone, the, “Ariana skin was made with a special eye towards the gamers that might also be Ariana fans. I think that there’s a lot of overlap in this community with the LGBTQ community.”

Cruz’s comment that Grande is particularly appealing to him and other members of the LGBTQ+ community has been echoed by fans on TikTok. The trend of assigning “gay icon” status to a female pop star — especially one who presents herself in a hyper-feminine way — is nothing new to online LGBTQ+ communities. Other stars like Lady Gaga or Madonna have long been identified by fans as “gay icons.” Grande’s brand simply creates a video game port of this kind of fandom. Since her Fortnite concert, just a quick search on TikTok shows videos with captions like “ariana got all the gays becoming fortnite gamers” or “Me peacefully gliding down getting ready to k1ll the toxic straights with my new Ari skin.”

The videos don’t just reference LGBTQ+ community, but also show how silly it is to snipe someone while playing as Ariana Grande.

As I should #foryoupage #arianagrande #fortnite #MakingTheCut #popular #fypシ #viral

The fan response to Ariana Grande in game can also feel encouraging. For some, like T. Kyle, who hosts a pop culture podcast called Legends Only, the memes and jokes that come from it help him feel more welcome. While T. Kyle isn’t new to games, he told Polygon that players make homophobic remarks to him “every time” he plays a game with voice chat. “The memes on social media were hilarious, and it makes you feel welcomed when you see so many other LGBTQ+ gamers online and looking for teammates,” he told Polygon.

Nico Deyo, a writer who has contributed to Polygon, picked up Fortnite a few weeks ago and told Polygon that they don’t like how the gender in Fortnite is random unless you buy the skins. Still, they bought the Ariana Grande skin when it came out. “Getting to dress up as Ariana Grande and be a crystal gem gun-toting baddie with a giant diamond hammer is neat,” Deyo said.

“There’s such an antagonism towards visual indicators of femininity in first-person shooters that this feels like going in the opposite direction for fun,” Deyo continued. They also told Polygon that they personally are butch in their day-to-day life, but they still enjoy playing as Grande in the game: “Being pink, sparkly, high femme in a video game also does feel like drag or a fun performance in a way if you aren’t necessarily a teen girl (or a girl at all).”