Red Dead Redemption 2 is a slow, deliberate game that focuses on far more than protagonist Arthur Morgan. Each member of the Van der Linde gang gets their time in the spotlight as Dutch and his boys make their way east toward St. Denis and onward to the vague, increasingly desperate dream of freedom.

It’s a grim march through America, but there’s a love story at the heart of the game that provides hope. John Marston and his wife Abigail represent a potential path forward, and it’s that story that eventually leads to the plot of the original Red Dead Redemption.

Building that relationship had to feel authentic. John, Abigail, and Jack are important members of Dutch’s gang, and Rockstar had to spend time during the five years of filming and acting to ensure their relationship hit the right notes.

The Marstons were, logistically, some of the most complicated characters to capture for Red Dead Redemption 2. Rob Wiethoff played the role of John Marston in the original Red Dead Redemption, and he was set to return for the prequel. Abigail, portrayed by Sophia Marcozzi in the first game, had been recast. Jack Marston, played by Josh Blaylock in the original title, would also be recast … and required multiple actors due to being a young child who grows up over the course of the game. Marissa Buccianti and Ted Sutherland would portray Jack, along with a child providing the necessary motion capture for early scenes.

Production took five years, with actors coming in to perform once or twice per month, says Cali Moore, the actress behind Abigail Marston.

“Most of our work was on the motion capture stage, so we were acting out the scenes in their entirety, as if it was theater,” Moore says. “The first few months I was there, it was just John and Jack and I. We built that family unit so early on that by the time we ended up doing things like the proposal scene, [we’d] known each other for five years, and met each other’s spouses. It’s not all acting; there’s a lot of real chemistry there.”

After a few months of just the Marstons being together, the rest of the cast was integrated, and they began working on the scenes that would build the rest of the game. The scenes were performed and prepared out of order; the actors never had access to the full timeline or context until much later in production.

Sometimes, filming would be dedicated to story cutscenes, and other times the cast would focus on smaller, optional interactions that players encounter around camp. Rockstar gave the actors more detail on their characters and scenes slowly over time.

“You’d learn something new about your character every single time you came in, and we were all learning those things together,” says Moore.

When the actors weren’t on stage, they would be in the green room together. There, they forged friendships, arranged to grab drinks, and shared stories of how Micah Bell’s actor, Peter Blomquist, had gotten them to break character during scenes with his joking. 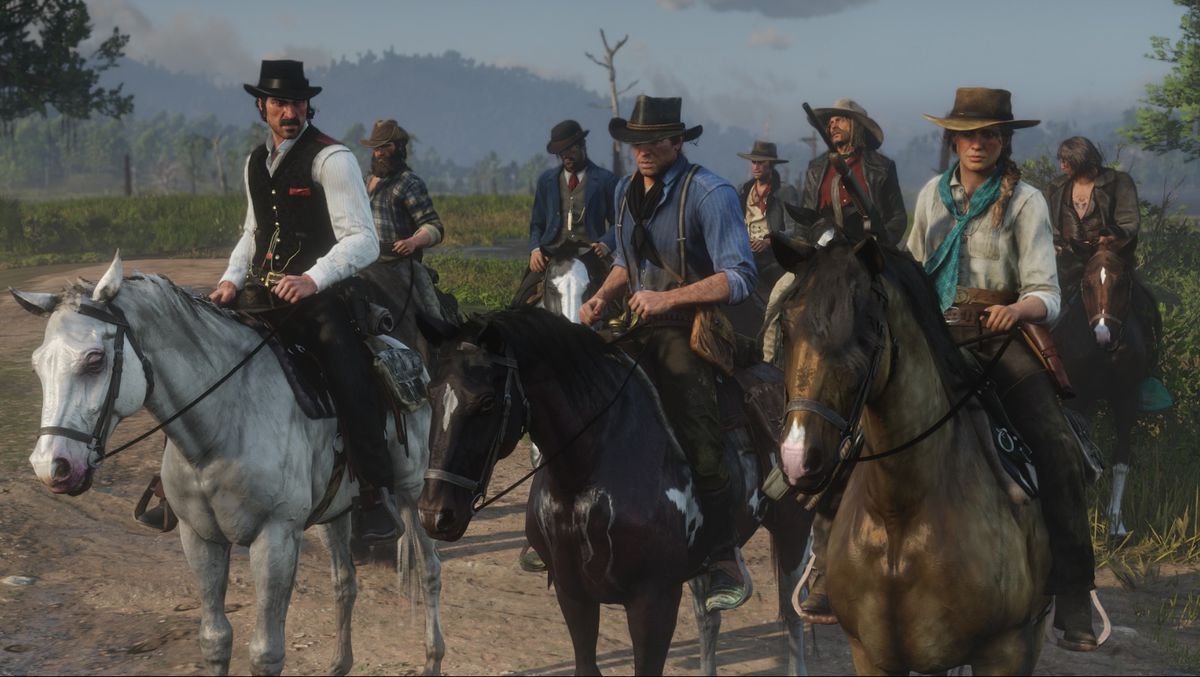 Abigail starts the game as a hostile presence on the edges of Dutch’s camp, sniping at John in-between missions. In return, he is openly hostile towards her and the concept of marriage.

Over the course of the campaign, their relationship changes. Jack is threatened by the Pinkertons, and later taken by the Braithwaites. When John is imperiled, Abigail leverages her friendships with Sadie and Arthur to ensure he comes home safe, and when the Van der Linde gang ends up dissolving under Dutch’s paranoia and Micah’s betrayal, Abigail is one of the few characters to prepare a soft place to fall for her family.

Moore describes Abigail’s arc as “a dream as an actress,” taking time to acknowledge director Rod Edge as “brilliant.”

“He really knows how to craft these scenes, and get the best out of each actor,” she says. Sometimes, that means a tender love scene with John or a vulnerable confession to Arthur. Other times, it’s Abigail raising hell when Micah hits on her. Moore’s personal favorite running joke is a squirrel in the epilogue that John keeps bringing into the house and Abigail keeps hiding.

“They definitely have a tumultuous relationship,” Moore says. “They did a good time of writing it true to that time. John has this amazing arc of going from a wild child who does whatever he wants to learning from his mistakes and becoming a family man. To be his partner in this was so interesting.”

“Abigail’s learned to make her own happiness where she can. So she sees where [the gang] is heading and she’s trying to get John on the right path, and the gang does fall away, but their love and her moral compass leads them to Beecher’s Hope and, at times, to this beautiful life.”

Weakness in the West

Abigail is also a character with one of the most obvious weaknesses in the game. Much of the van der Linde gang is focused on hiding their weaknesses and giving the illusion of invulnerability. Hosea tolerates Bill until he loses his temper and draws a gun on his drunk colleague. Lenny is quiet and withdrawn. If Arthur teases Dutch, Dutch snarls back at him, making it clear who’s in charge at camp. Meanwhile, Abigail is openly vulnerable and emotional, a luxury afforded to her by being a woman and a mother in the West.

Moore notes that it was easy to fall into that role thanks to Jack’s actor.

“The little boy who played Jack at his youngest was the sweetest little guy. He’s, like, 5 years old, and he had this tiny little voice and he was just the cutest thing you’ve ever seen,” Moore says with a laugh. “It was very hard not to have motherly feelings for this kid. I’ll never forget the scene where Jack’s been kidnapped and they bring him back.

“He jumps off the horse, and he’s saying ‘mama,’ and he’s running towards Abigail, and as he did that scene he was running towards me. It’s not very hard to burst into tears. The kid’s adorable, and he’s such a sweet kid, and those moments were so easy to connect to because as a mom I’d be wondering what it’d be like to have your kids be kidnapped, not knowing where he is for days on end, and with that sweet little kid in front of you? It’s definitely another layer to Abigail and portraying that character.” 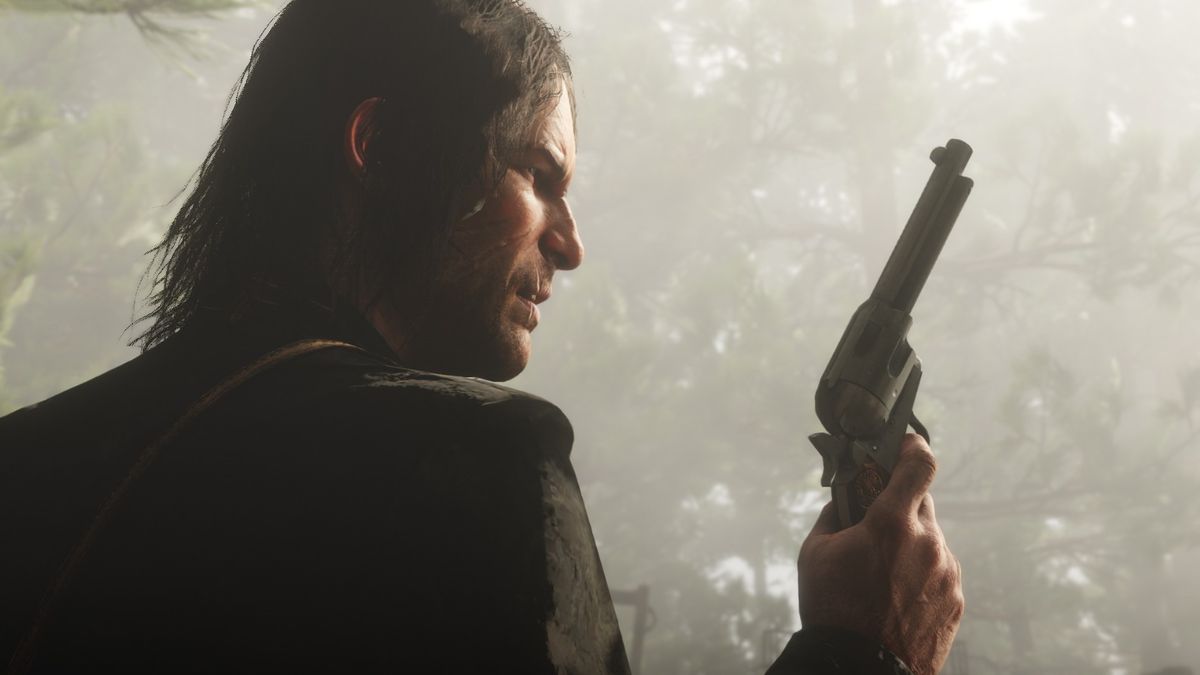 Not only did the crew on Red Dead Redemption 2 have to cover a massive span of content, some of which would never be seen during a single playthrough, but each scene had to be practiced to perfection.

“You’d think that after five years, eventually they’d be like, ‘Eh, yeah, that’s fine,’” says Moore. “But every single thing had to be perfect, and we’d go over and over getting the scene exactly right.”

The long span of filming, combined with the chemistry, means that many of the relationships between the characters mirrored the ones between their actors. Hosea and Abigail’s relationship reflects part of Moore’s relationship with actor Curzon Dobell, whom she describes as a “lovely man.”

The camp encounters with the entire cast gave Moore a chance to play up Abigail’s spicier side. “Abigail has a little bit of a temper. She doesn’t have time for any malarkey; she can go from zero to 60 on some things,” she says.

The cast was continually surprised at how much content there was and how many scenes they had filmed. While playing the game, or talking with fans, Moore notes that she would be surprised how many smaller interactions or scenes she had filmed and forgotten up until revisiting them.

As for her performance, Moore acknowledges that it’s a bittersweet story, since it sets the stage for the eventual tragedies of the original Red Dead Redemption. However, she feels that the entire story across both games is a beautiful, poignant one.

“You get to see what made John that kind of man — a stand-up, authentic, loyal man. He had to learn the hard way.”