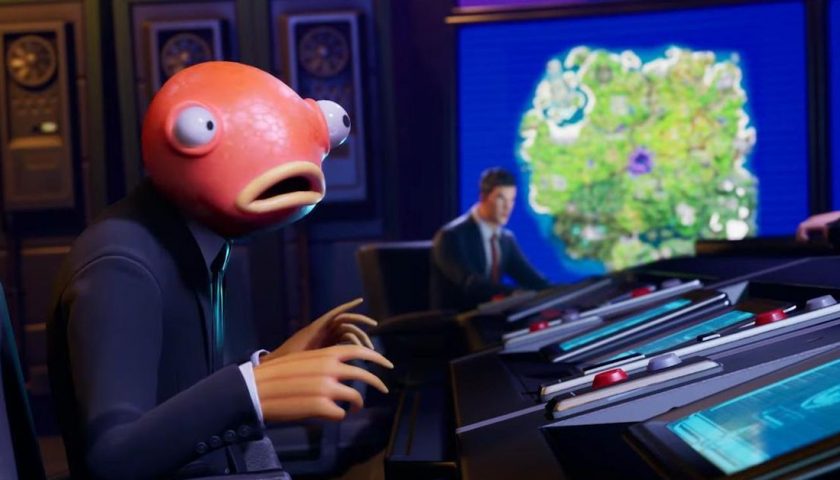 Fortnite’s new Impostors event is simple: Ten players enter a station, but two of them are impostors. The innocent crew members need to complete a series of tasks around the map without getting murdered — or at least while catching the murderer as quickly as possible. Yes, there’s no way around it: It’s Among Us.

Among Us’ gameplay loop is simple and lean; Fortnite’s Imposters clutters it up. Impostors is visually busy and crowded, and it’s not just because everyone has their fancy 3D model with custom skins and emotes attached. It’s hard to see myself playing it with family members, much less politicians using it as a public outreach tool.

It’s a worse game, but that’s not the point. Actually watching streams or playing the mode itself makes the advantage very clear. Imposters is way better as a social space.

Impostors is goofier than Among Us, and allows for more Looney Tunes-style shenanigans. One sabotage function allows an impostor to turn everyone into a banana. Ariana Grande and Rick Sanchez can stop and floss aggressively at each other in a hallway. At one point, I stop and painstakingly punch in a fast food order only to have John Wick run up and shoot me with a ray gun. It’s less awkward to chain games together as a group than it is with Among Us, which players often augment with Discord chat.

Ever since it made its first metamorphosis into a battle royal, Fortnite has been a chameleon. Impostors is an inelegant evolution of the game’s usual formula, and one that has drawn criticism from Among Us developer Innersloth. But what Impostors does highlight is Fortnite’s greatest strength, which is serving as a digital hangout space.

Does the Impostors mode have legs? It lacks the simplicity that makes Among Us so accessible, even to people who don’t play games, and the beloved beans. The Fortnite mode is visually chaotic, with 3D set pieces so colorful they are sometimes tough to visually parse. In Among Us, you can miss something because it’s hidden in shadow, or because the beans are stacked so densely that you miss details. In Impostors, you can miss things just because there’s just a lot going on in the environment. There’s more chaos, and that’s not always a good thing.

It may not last long, but Imposters shows where Epic’s priorities are as a developer. Fortnite isn’t really a game, so much as it’s a content hub and social platform. At times, the game almost seems to be competing with VR Chat and Second Life more than Among Us or PlayerUnknown’s Battlegrounds. Even if the Among Us-style experience doesn’t catch on, this likely won’t be Epic’s last swing at a social sabotage game.