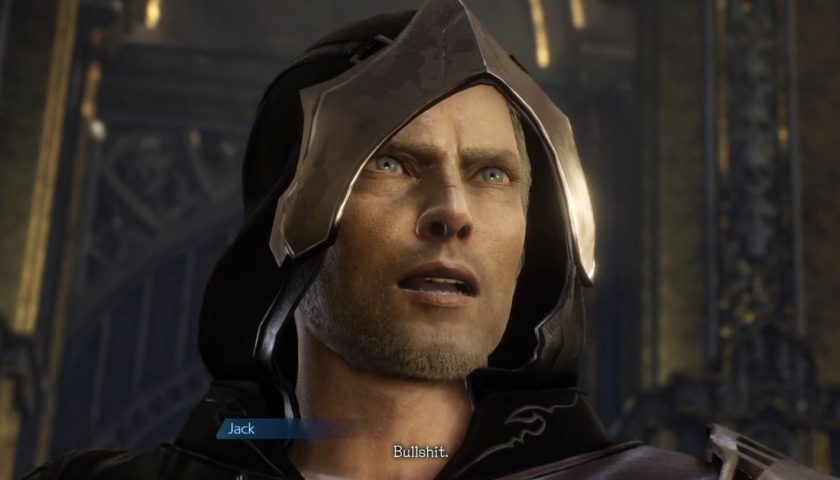 At first, Jack, the protagonist from Stranger of Paradise Final Fantasy Origin, didn’t seem all that notable. He was just the dude who wore a plain black shirt in one of the most fashionable and eye-catching franchises in the history of JRPGs. However, the man continues to make a name for himself, and not just for his fashion choices. Gameplay from a new demo for Stranger of Paradise shows an absurd, extremely emo scene: Jack says “Bullshit” and blasts metal music in his wireless earbuds, before strutting out of the castle.

Stranger of Paradise Final Fantasy Origin is a new souls-like action game from Square Enix and Team Ninja. The game departs from conventions of the Final Fantasy franchise in many notable ways, and presents a much darker vision for a Final Fantasy game. The second trial version came out on Friday for PlayStation 5 and Xbox Series X. Now, people will get to see more of Jack and who he is as a character — with this one scene sticking out, in particular.

Jack is a simple man with a simple goal: He wants to kill Chaos, a mysterious being who brings darkness to the land. The scene in question comes after completing the Chaos Shrine, the first zone of the demo. Jack and two of his buddies infiltrate the shrine (which is actually a sprawling castle) to fight a giant, armored monster that they think is Chaos. Instead of beating Chaos, they find out that the monster is actually a girl named Neon.

After they beat her, Neon explains that she’s also been looking for Chaos. After spending her life looking for him, she’s beginning to think the mythical creature of darkness doesn’t exist. And what does Jack say to Neon after she pours her heart out and explains her suffering? “Bullshit.” Then he precedes to crank up the nu metal and peaces out. You can watch the full clip below.

Yes, the scene is real.

The contrast between the medieval fantasy environment and Jack’s weirdly masculine modern attitude throughout the demo is already funny. And Jack putting his earbuds in, like a stubborn child who doesn’t want to listen to their mom, pushes it into peak comedy. Fans online have have been posting the clip with comments like, “WHAT DID I JUST WATCH??????????,” and “this the biggest troll game I’ve ever seen,” because it’s just so ridiculous. The scene is enough to put even the socially awkward Cloud Strife to shame.

When Stranger of Paradise was announced, creative producer Tetsuya Nomura said that he was thinking about writing the story of an “angry man,” when conceptualizing the game. While this is a pretty general statement, and slightly vague, we now know it apparently means writing a character who has the demeanor of a moody teenage boy.

Stranger of Paradise Final Fantasy Origin is coming to PlayStation 4, PlayStation 5, Windows PC (via the Epic Games Store), Xbox One, and Xbox Series X on March 18, 2022.