My shorts are stained red with blood, and most of it isn’t mine.

I’m playing Fight Night Champion nearly a decade after its release. It can be a shockingly violent game, even given the subject matter. I deconstruct my opponent with body shots and side steps, throwing off his balance every time he tries to rush inside. But then one of my power punches leaves me open. The punch he sends into my chest drops my stamina-poor fighter to the mat. I extended myself too far and won nothing for my efforts, which isn’t a bad metaphor for the series itself. 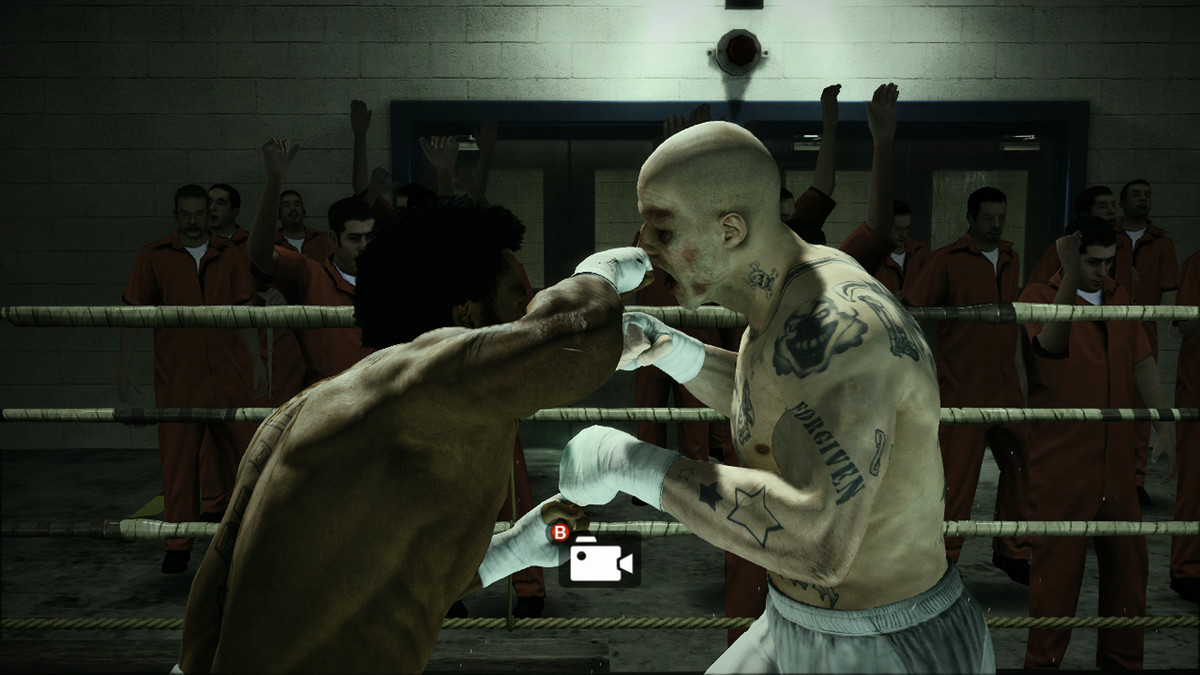 Fight Night, as a franchise, should be dead. It was built on a messy web of individually negotiated contracts that often meant popular boxers were dropped from each game’s roster for various reasons. Then EA signed a deal with UFC one year after Fight Night Champion’s release, transitioned the entire EA Canada team to develop UFC games, and extinguished the last unlicensed EA Sports series.

Yet nearly two thousand people are still using the Fight Night Champion servers when I log in on a random Thursday afternoon. The game is backward compatible on Xbox One, extending the series’ lifetime into the next console generation due to Microsoft’s focus on creating a single, contiguous library of games for its users. And Fight Night Champion, graphically and mechanically, holds up really damn well.

There hasn’t been a Fight Night release in over eight years, and somehow, I still see a contender.

I also found a kindred spirit in Andre Bishop himself.

Andre Bishop seems to be a quiet guy. Emphasis on “seems.” 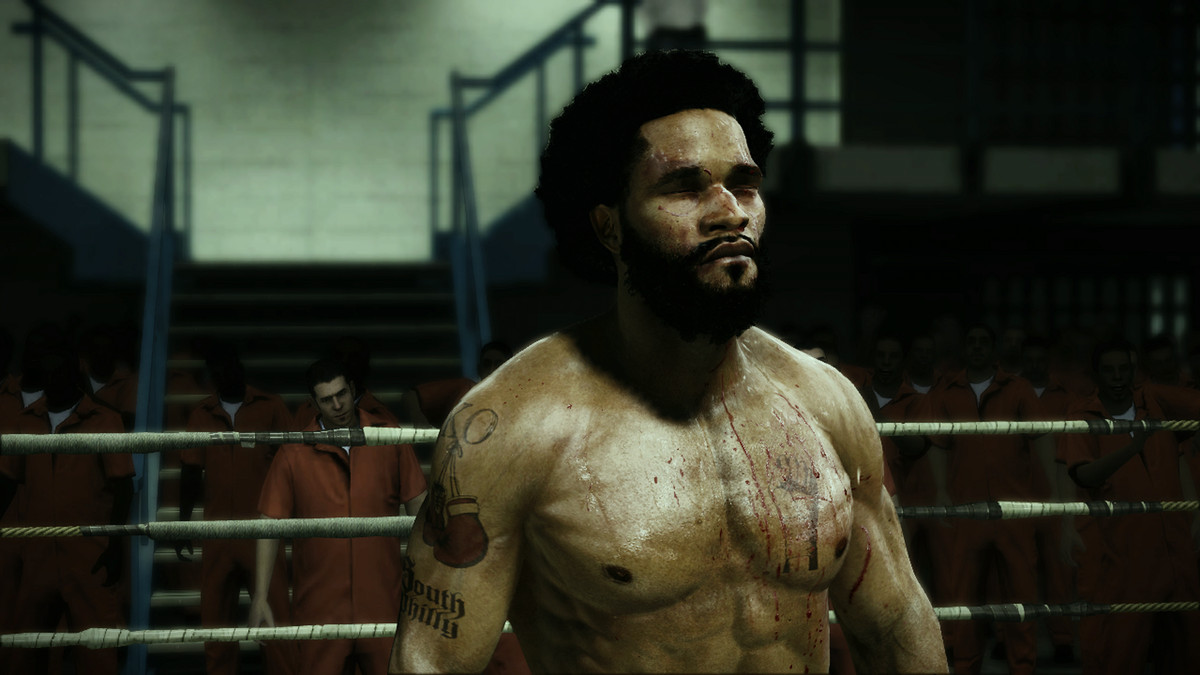 No, he doesn’t chase press interviews. Yes, he’s empathetic. And yes, he works hard. However, the further I progressed, the more I realized that what I initially took to be a nature of calm was in fact a constant practice of self control. Andre faces a barrage of indignities throughout the campaign. He’s attacked for his talent, his race, his commitments; sometimes, he’s attacked for the bare fact that he exists. I didn’t find the crunch of restrained pain and force of will that crossed his digital face until I recognized how often it had crossed my own.

I’m black. It’s hard to describe how much of my life feels actively dangerous. I don’t run places, even if I’m late. A black man running down the street inspires questions, if not gunshots. When I’m in cars that are pulled over, I make sure my hands are always in sight. I don’t make sudden movements in public. I use the word “sir” a lot.

When I lived overseas, I slowly discovered that the town my family had moved to was filled with neo-Nazis. I ended up playing a tactical board game with one at the local board game shop. The entire time, I calculated how many rounds I could win and still walk out of the building safely. Watching the bulging vein on his temple, I moved accordingly.

So, when Andre Bishop sinks his fist into another Nazi face, or gets the championship belt he earned against every odd and disadvantage, I feel a sense of freedom myself. He unleashes himself, and grins, and screams his greatness and joy to the world. He doesn’t have to apologize for existing anymore.

In every sense of the word, he won. That story is a tangibly powerful force for the game, even before we discuss the mechanical brilliance of its presentation and take on boxing.

A sport with a story

Before FIFA’s The Journey, or the Longshot story told across a series of Madden games, Fight Night Champion introduced a cinematic story-based campaign to a sports game — one written by Will Rokos, the Hollywood screenwriter behind Monster’s Ball.

It’s the first and only M-rated EA Sports game released to date, and it starts with a bare-knuckle prison brawl against a skinhead. It drops a couple of F-bombs before I even reach the main menu.

My strikes affect the stamina, balance, and health of my opponents. I can trace the cause of every knockout in hindsight; a jarring montage of accumulated damage and tactical missteps that lead to a random jab causing my opponent to buckle to the ground. The game’s camera shakes with impacts and counters, and when a fighter is stunned the entire system shifts to mirror the changing dynamic of the fight. The camera swivels to focus on the injured party, colors for anything outside of the ring drain away, and a keening whistle overwhelms all sound. The atmosphere is no longer one of a battle; it’s a hunt. 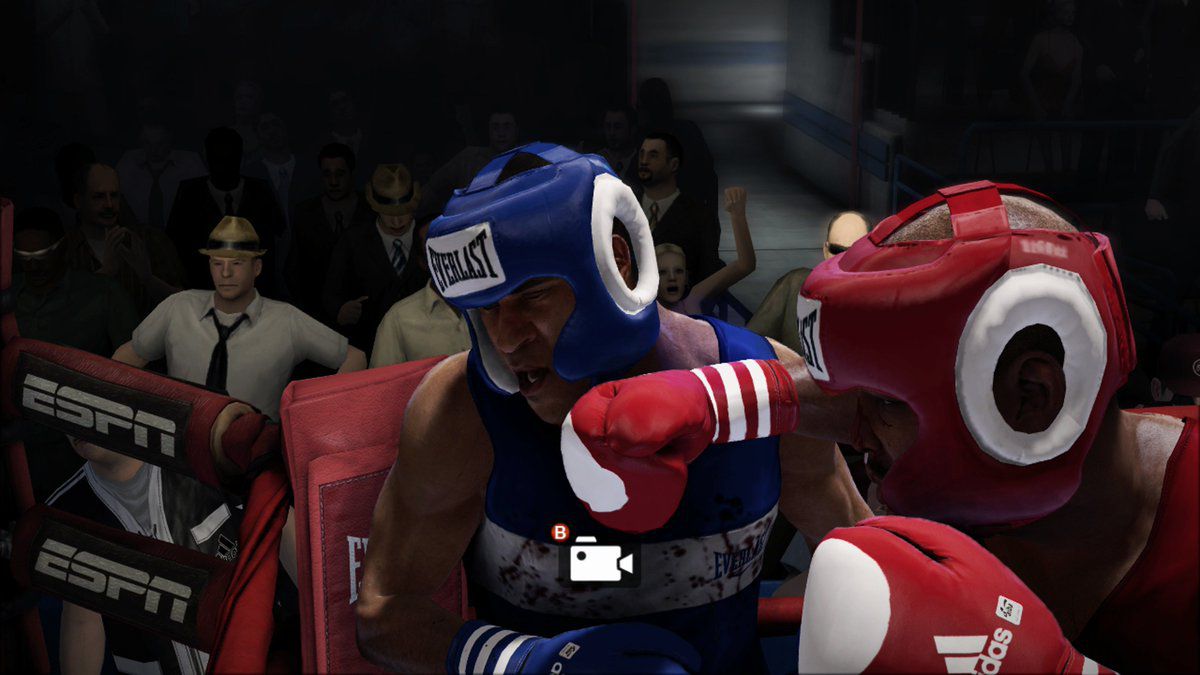 A sports game — let alone a series — reaching outside of its core audience is a major outlier. People buy the NFL games because they love football, the FIFA games because they love soccer (the more popular “football”), MLB: The Show because they love baseball, and so on. Fight Night seemed to transcend this barrier, or at least try to. Combat simulations of all kinds are of course an industry staple at this point, but that doesn’t fully explain the appeal. My mother doesn’t play games, but when George Foreman weaves during character selection in Fight Night Champion, she’s transfixed.

There’s a purity in what’s being depicted, and it’s reflected in what the developers choose to focus on. The crowd surrounding me is a blocky mess, but realism triumphs inside the ring. Flesh shakes like it’s experiencing miniature earthquakes. Bodies bruise. Blood congeals or drips depending on the freshness of the wound, and the movement speed of the desperate boxer shuffling away.

Leaning, blocking, clinching, and punching are a limited, accessible set of actions, and the absurdly detailed avatars on screen inspire investment. These are people up there, many of whom carry real cultural significance. Muhammad Ali, Mike Tyson, George Foreman, Manny Pacquiao, Joe Frazier … these names carry weight, and their faces and reactions to each fight tell a story.

The challenge for the team of developers working on Fight Night Champion was then to inspire similar excitement about a boxer audiences aren’t familiar with, in an occasionally explicit cinematic campaign that uses familiar sports beats to thrill and challenge.

They manage to do just that, using a secret weapon: the aforementioned Nazis.

The power of beating the bad guys 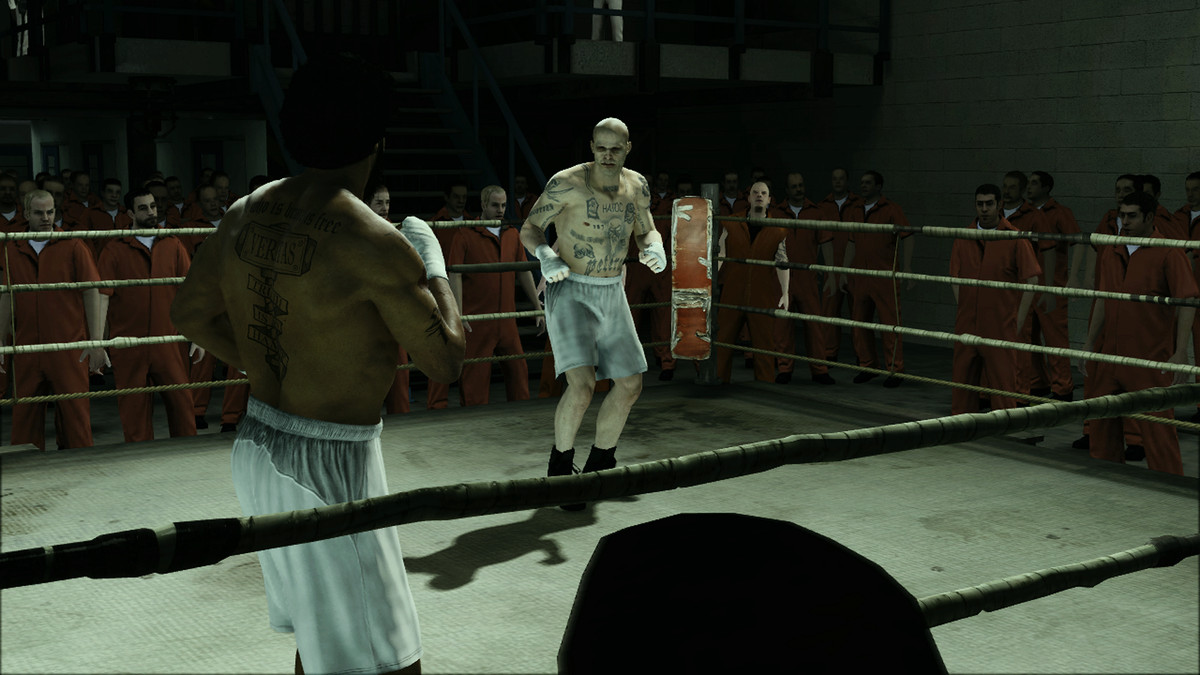 There was a time when fighting Nazis was less common in video games, and it extended well into the 2010s. It was a bad time. The developers of Fight Night Champion heartily defied this trend by dedicating a significant portion of the Champion Mode campaign to the falsely accused black protagonist, Andre Bishop, beating the shit out of skinheads in the unjust prison hell he’s been sent to.

In contrast to typical modes like the RPG career-esque “Legacy Mode” and the instant gratification of “Fight Now,” Champion Mode gives my fights a narrative context. Cutscenes bookend and intercut the bouts, many of which have special conditions to make them feel unique. Listening to my trainer, or going to the pause menu, informs me that my current opponent is vulnerable to body blows — no “scouting” required. In one scenario, Bishop is hired to be the sparring partner of a heavyweight fighter. 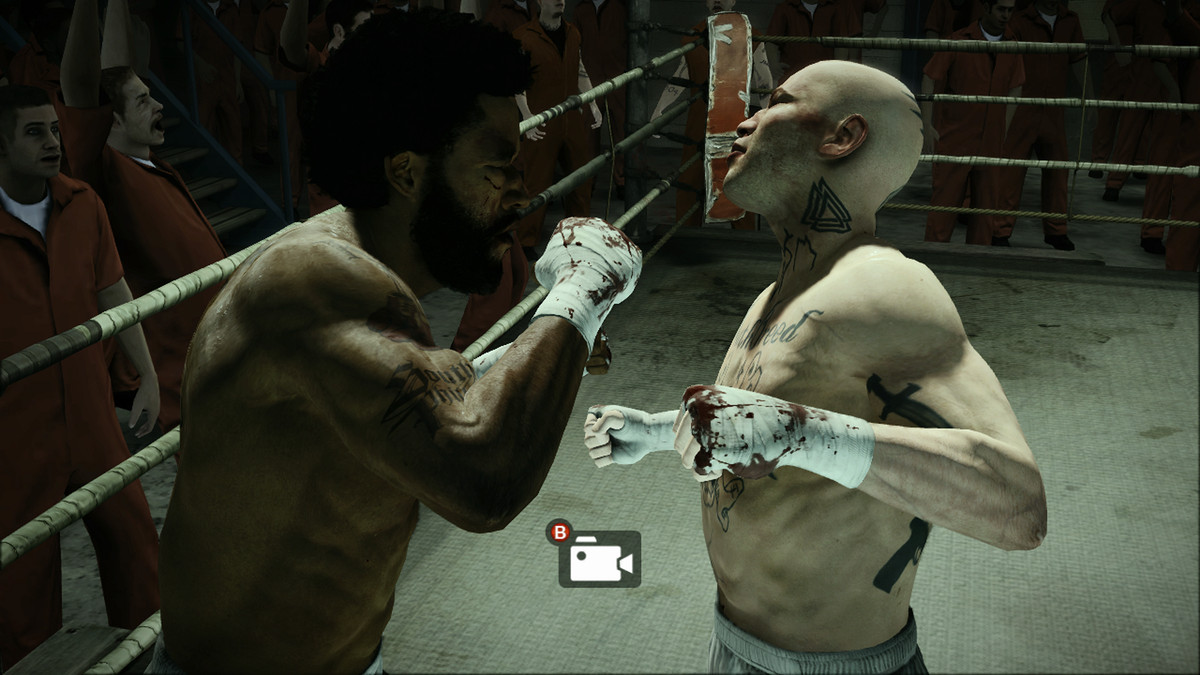 If I give my boss a concussion with a knockout via a blow to the head, Bishop loses his job. In another scenario, my right hand is broken, forcing me to fight with nothing but my left unless I wish to risk my boxing future. In yet another scenario, someone in my gym is just being a jerk, so I teach him humility. Through punching. Each situation offers a valuable new way to view my toolset, and in a way, the game’s protagonist.

There’s a corrupt promoter, a fame-hungry brother, an arrogant rival, down-to-earth mentors, betrayals, overwhelming odds to overcome … The narrative isn’t particularly original, but that’s not the point. The concept pursued here is, quite simply, boxing; distilled and linear and familiar and triumphant. Actors play their roles admirably, there are some neat character moments, and the weaving of narrative context with gameplay challenges just works. Champion Mode is impressive — I’m surprised others didn’t follow in its footsteps sooner.

When I look at Fight Night Champion as a whole, my chief impression is one of incredible cohesion. Razor-honed fighting systems pair with graphics and animation that continues to impress to this day. Familiar story beats are well-told through an intersection of meaningful challenge, clear writing, and compelling performance capture. Andre Bishop remains a vivid (if forgotten) protagonist nearly a decade after his debut.

As much as I try to find some tragic downfall in the game that speaks to the inevitability of the series’ demise, I can’t. In Fight Night Champion, I don’t see the lovingly created swan song of a dead franchise.

I see a fighter ready for a comeback.