Getting a pet in the post-apocalypse is no easy feat. For one thing, nearly ever mutant creature you come across in Fallout 76 is hostile, which pushes most players to simply murder all wild animals. But a friendly player-created faction dedicated to enriching the lives of wastelanders is changing all of that in Bethesda’s MMO.

The Couriers are a group of Fallout 76 players who provide a variety of services for other fans, mostly in the realm of trade. Some items in Fallout 76 cost so many caps that a single player literally can’t hold all the money — which is where the Couriers come in. Vetted before joining the organization, Fallout 76 players can trust Couriers to hold their valuables during high-end trades where multiple people are needed to transfer caps, or more often that not, bullets. (Curiously, bullets are worth more and weigh less, allowing ammunition to become the de facto currency within the game, much like it is in the video game series Metro.) Rather than hoping strangers will hold their end of the bargain, Couriers ensure that trades always unfold as agreed. And when the Couriers can’t be there, they’re still a force for good — the clan maintains a list of verified hackers and scammers who have wronged players in the past.

While this is the primary function Couriers provide, the organization has grown to encompass other services, such as banking, real estate brokerage, camp construction, and most recently, pet adoptions. The Couriers Adoption Agency is the creation of Kat Pender, an intrepid Fallout 76 player who started offering her services solo late last year. The demand was immediate, because as it turns out, taming creatures is kind of hard. 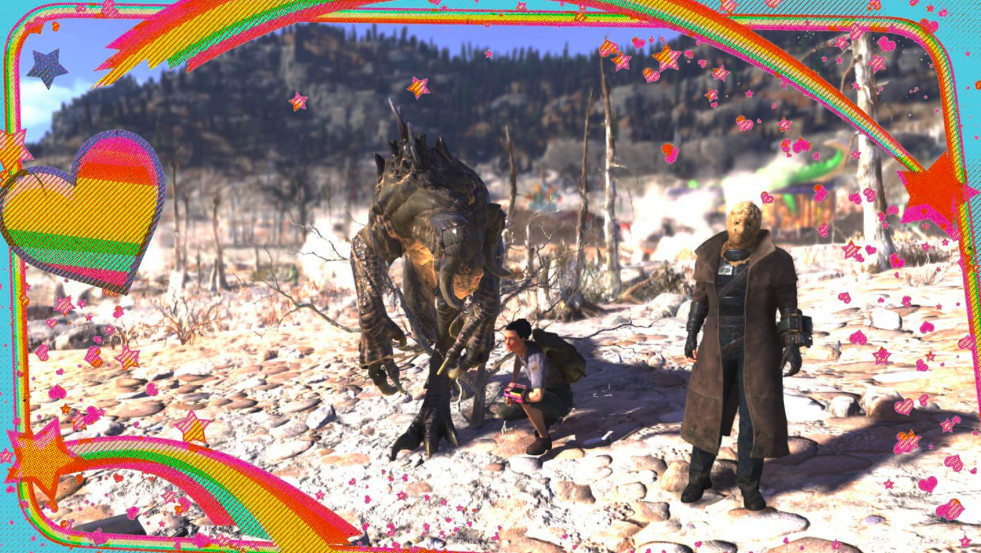 To do it at all, you first need the Animal Friend perk, which becomes available at level 30. You then need to level that perk up three times to get the taming ability — but even so, there’s no guarantee it’ll work. The game never tells you how to go about it, but players theorize that you need to find lone spawns that are at least half your level, and there’s only a chance you’ll be successful. Elsewhere, there are stories of players waiting for hours to even try the ability out. Many don’t even know you can do it at all.

“I love taming animals in the game,” Pender told Polygon in a Facebook message last year. “People have told me how difficult it is to find them. I see 5 or 6 a day. I wanted to share that with other players.”

The adoption agency provides a team of animal tamers who will go out into the wasteland to find creatures for players, with members even building a headquarters that others can visit. Rescuers will then post an announcement in the Facebook group. While they await responses, rescuers will protect the animal until a potential parent comes to pick it up. Claims for specific creatures are active for 10 minutes, after which rescuers will put the critter up for grabs once again. Options range widely. Players can adopt everyday animals, like cats, dogs, and bunnies — or they can befriend things like Mirelurks or Yao Guai. But whatever players choose, rescuers want to make sure that the animal is appreciated and cared for.

“Provide your adopted animal with a safe and loving environment with plenty of room to roam,” the adoption rules say. Players also have to take stock of an animal’s temperament: Scorched creatures, for instance, are known to attack some player resources even after they’ve been tamed. Potential parents have to do their research. 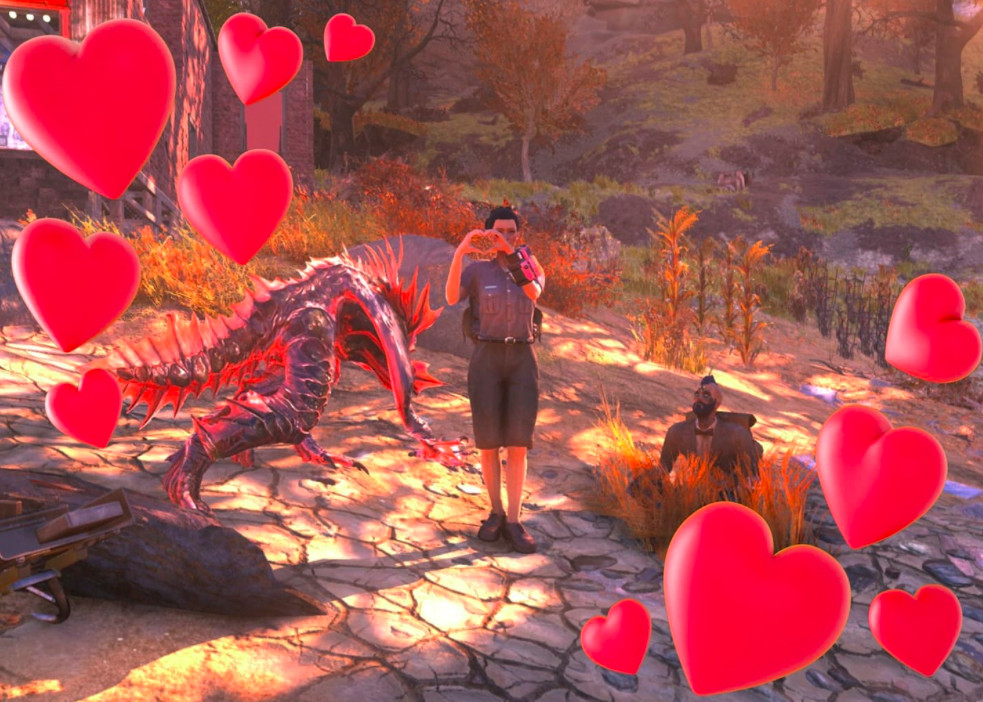 Judging from an informal poll posted to the Facebook group, it seems that the dinosaur-like Deathclaws are by far the most popular option that adopters seek. The fearsome Snallygaster, meanwhile, is the least-wanted option, though they’ll still get snatched up. It’s a concern that Rescuers have to grapple with, as their efforts may not always be rewarded with interest from players who want the so-called “coolest” options.

“Please remember the level of time, patience and dedication it takes to do what we do every day,” Pender wrote, in response to having several unclaimed animals. “We want to match you with your dream pet but sometimes we come across many others along the way.”

The bounty hunters of Fallout 76 will kill anyone you want, for a price

It’s not just that taming animals comes down to chance and patience — sometimes, taming efforts go awry. One time, Pender saw a chameleon Deathclaw, a rare variant that has the ability to become invisible. She ended up having to put it down.

“It was soo heartbreaking to kill Fallout’s unicorn,” Pender wrote in a photo post that showcased a chameleon corpse. “But he wasn’t tamable and was aggressive. [They’re] so beautiful,” she added.

Sometimes, the creature may be amenable, but the wilderness is not. Pender described a time when she was going after a Radtoad, only to have it be killed by a Wendigo mid-taming. A different time, while hunting a Deathclaw, a Scorchbeast showed up — which caused the Deathclaw to also turn Scorched, and in doing so, doubled its own level. The Deathclaw ended up running away. 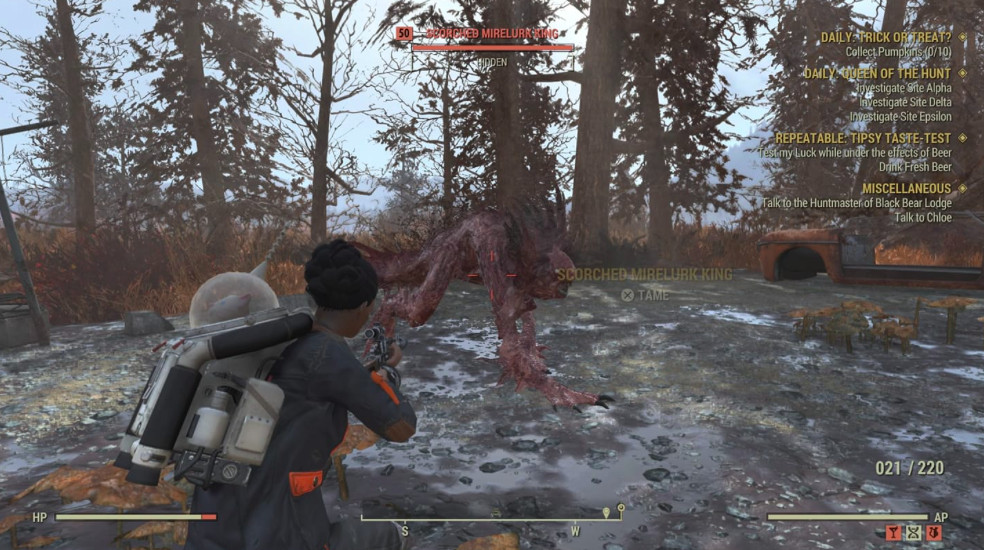 “I know it’s hard losing a pet but there are successes,” Pender wrote in a group discussion. “My [Deathclaw named Ham] has been with me for 4 months now.”

And so potential parents are encouraged to try out their second or third top adoption choices, rather than sticking it out for something that may not may not stay on the market for very long — if they’re available at all.

Judging from the responses in the Facebook group, though, plenty of adopters are walking away extremely happy with the friends that do make it. While the agency provides its services for free, some players end up tipping caps.

“Gail is enjoying playing hide and seek in the mud and grass at her new furrever home,” wrote Renee Michelle Grocott in regards to her new mutant bear.

“I had a Radtoad for about 2 hours this morning but a Scorched killed it,” wrote Daleena Gordon on the group’s Facebook wall. “He was so cute too!” she bemoaned. “Even played in the little creek by my camp.”

Other times, Fallout 76 will glitch out and make people’s pets disappear.

Even worse, sometimes asshole players seek out other people’s pets for kills, just to rub it in — everyone knows that taming a pet takes hard work, so camps with a buddy get a target on their back.

“Just found out someone killed my prize sloth :’(“ wrote a heartbroken Emily Wagstaff on the adoption group. Upon hearing about this, Pender immediately offered her services in return. If war never changes, then perhaps the adoption agency’s work is never done.