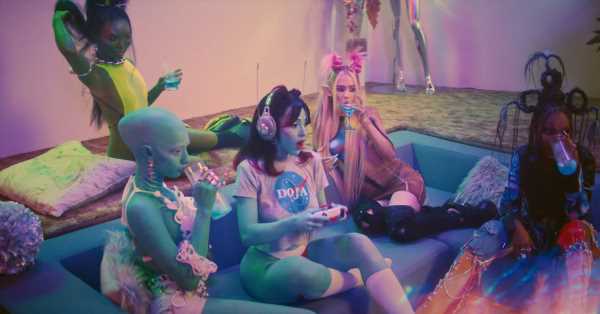 In the new video for “Need to Know,” a single off the upcoming album, Planet Her, Doja Cat playfully grinds the air to dance in her undies, then plays her PlayStation 5 alongside her troupe of baddies. The small detail is yet another example of how the pop artist and TikTok viral sensation threads video games into her work.

The music video is a relatively standard concept: Doja and her girls have a night out on the town. There’s just a slight twist: They’re all aliens — Doja herself resembling Aayla Secura from Star Wars — and it takes place in a retro-futuristic Blade Runner-esque world. Instead of depicting them getting all glammed up and putting on makeup, we see the group lounging on the couch, and pregaming with video games. It’s sexy. It’s cheeky. And most of all, it’s oozing with Doja Cat’s usual playfulness as she dances on the sofa and smoothly grinds the air to dance alongside her girls.

“The concept truly came from Doja and her team,” director Alex (AJ) Favicchio told Polygon over email. “Planet Her was the guide and she really had a great base story for the visual.” Favicchio directed the music alongside Miles Cable, with support from their production company, SixTwentySix Productions. And what’s noticeable about Planet Her is how Doja manages to capture the spirit of being hot, but also, you know, acting like a typical 25-year-old.

Leading up to “Need to Know,” Doja has continued to play around in the games space. She has a Twitch stream every now and then where she spins hilarious, off-the-cuff raps while playing. Her music video for “Kiss Me More” also featured a fictionalized game. She goes off in interviews about the kinds of games she likes to play. (More recently she’s been playing Gang Beasts and Inside, in case you were wondering.)

Doja Cat is part of a trend of mainstream artists dipping into gaming and animation culture. Megan Thee Stallion has rapped about Naruto, posted photos in Kakegurui cosplay, and even collabed with CrunchyRoll to make her own line of anime-inspired clothing. The hip-hop artist Lil Nas X has sci-fi futuristic themes in his music as well, performed on the children’s gaming platform, Roblox, and even released a game where you twerk for his single, “Montero (Call Me By Your Name).”

Unlike most of her contemporaries, Doja Cat is a celebrity who embraces gaming like a normal person would: not as a niche thing to be into, but as a form of media that just exists. In her world, games are just like music or television — they’re there. And the two directors of Planet Her, Cable and Favicchio, feel the same. It’s not really about “nerd culture,” it’s just something that’s cool, period. “We’re all nerds behind the camera, just pick your department,” Favicchio said.

“This never felt nerdy in my eyes,” Cable said. “I’m a big gamer and just overall geek. Always being attracted to 3D art and video games, I’ve been itching to dive into this type of work.”

What’s more is that the music video wasn’t just inspired by video games, it also used technology from video games to make it happen. Cable created all of the 3D scenes using Unreal Engine, similar to the special effects on The Mandalorian.

“Unreal Engine is beginning to migrate into the production world and I feel like we are one of the earlier adopters of it.” Cable said, “Unreal Engine has been so fun and daunting at the same time, but as I get deeper into it, AJ and I are learning how we can keep utilizing this tool for more and more projects in the future.”