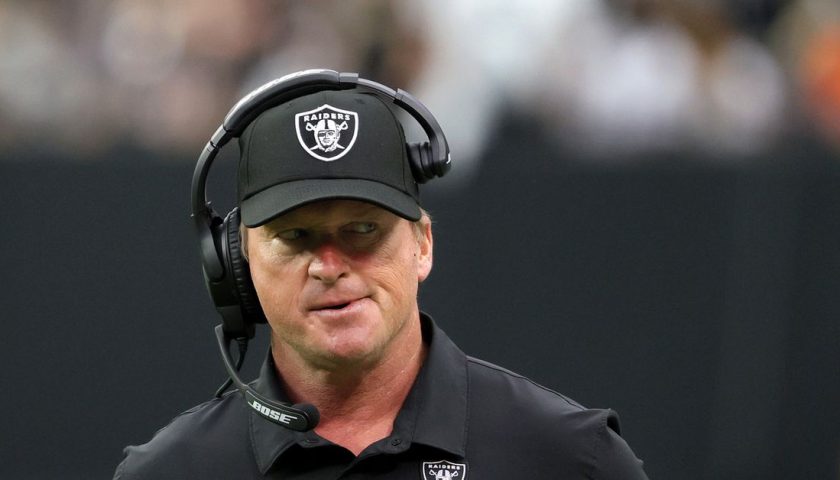 NFL players who get kicked off their teams for bad acts are taken out of the Madden NFL video game somewhat routinely. The game maintains an official roster for ranked competition, and it reflects who is active and who isn’t in the real world. But in what appears to be a first, EA Sports is yanking a coach off its virtual sideline.

That would be the disgraced Jon Gruden, ex-head coach of the Las Vegas Raiders, who resigned on Monday after a lengthy history of racist, sexist, homophobic, and otherwise ugly emails came to light. The emails were part of a league investigation into the Washington Football Team’s own toxic workplace; some were included in court filings in an unrelated lawsuit.

On Wednesday, the official Madden NFL Twitter account announced that the game’s developers will replace Gruden with a generic coach. In real life, the Raiders’ interim head coach is Rich Bisaccia, previously the club’s special teams coordinator. Head coaches — like players — license, and are compensated for the use of, their images and likenesses in Madden NFL. (A notable exception is New England’s Bill Belichick, who doesn’t want to be in the game.)

Coordinators and assistant coaches currently appear in name only, so if Bisaccia serves as the Raiders coach for the remainder of the season, EA Sports will have to build a character model in addition to getting his permission.

Gruden’s removal probably won’t affect career modes already in progress, or those that are started at a point where he was on the roster. We’ve reached out to EA Sports for more clarity on this. Franchise players in Madden NFL have the option of controlling a team as its real-life head coach, or creating their own. They can also play for that coach in a single-player career, or hire or fire him as an owner of the franchise, all in the same mode.

Athletes who have been suspended for alleged criminal activity or serious misbehavior have been removed from Madden altogether before (although they remained part of career save files started before the player was patched out). In 2014, when Ray Rice, then a Baltimore Ravens running back, was suspended indefinitely after an incident in which he was seen on security video punching his then-fiancée in the head, EA Sports removed him from the Madden NFL Ultimate Team library of players, too.