Overwatch gets three new heroes a year. There’s a routine and a rhythm to their release, especially for the heroes who are announced outside of BlizzCon. There’s a tease or two on social media, and then we get to see an animation that introduces us to the character as, well, a character, and then finally there is a kit reveal. Sometimes, those reveals land well, and I am delighted or intrigued at the newest member of the Overwatch cast.

Sigma, Overwatch’s Hero 31, was far more of a gut punch. His origins animation is an ambitious piece of work from the Overwatch team; it involves non-linear storytelling, an abstract depiction of Sigma’s thought process, and a healthy dose of cosmic horror. It verges on the Lovecraftian, or inspired by a plot device like Warhammer 40k’s Warp.

I’ve struggled with mental illness my entire life, including in-patient stints in hospitals. Today, my health is much better managed, and I take a cocktail of medications and see a surfeit of professionals to ensure it stays that way. But when you’ve been in the mental health system your entire life, it’s easy to see how parts of that experience have evolved into common cultural tropes and archetypes.

Padded rooms, abandoned asylums, and straitjackets are all imagery that is liberally used in media. It’s a convenient shorthand for unpredictability, violence, or loss of control that appeals to a primal fear — and unfortunately, that can contribute to the real-life stigma around mental illness. In Sigma’s origin video, he is restrained. Floating equations are liberally used throughout the narrative, reminiscent of A Beautiful Mind’s depiction of a mathematician dealing with schizophrenia.

When I had the chance to sit down with three Overwatch developers, including lead writer Michael Chu, I asked about the animation and whether it was an intentional depiction of mental illness.

“It’s interesting, because I can see how people in the community have identified with Sigma as someone who is struggling or dealing with mental health issues,” Chu said. “But with the idea of the character, we never intended him to be an example of someone who’s going through mental health issues. He’s really supposed to be more focused on this very specific thing that happened to him, which is that his body and his mind were literally ripped apart by the momentary exposure to a black hole.

“With other aspects of his character, he’s certainly supposed to be eccentric. The idea behind that is more just that he sees the world a little differently. We liked this idea that he had this connection to music. So, for example, the way that he thinks about the universe, gravity, and physics, is through this prism of music. From experience talking to physicists and especially theoretical physicists is that other things that aren’t literally just the equation or the mathematics have influenced the way in which they interpret things. And so that’s the direction we went with him.”

According to Blizzard, Sigma is “unaware” he’s “being used as a living weapon.” Instead, he’s largely working off-site, in a lab Talon has granted to him. It’s a similar dynamic as the one Symmetra shares with her Talon-affiliated boss at the unethical Vishkar corporation. Symmetra is also on the autism spectrum, as hinted in a comic and confirmed by game director Jeff Kaplan. It’s an uncomfortable dynamic to work with, and can potentially go wrong.

With Sigma, it’s easy to read the shorthand Blizzard uses as common mental health tropes, even if it wasn’t what was intended during production. If one sees him as unstable and ill, then the dynamic between him and Talon is inherently exploitative.

That’s not unprecedented; Talon kidnapped Widowmaker, brainwashed her until she killed her own husband, and then underwent genetic modification that included her heart slowing down and her skin turning blue. But Widowmaker is so extreme, so disconnected to real life, that it’s hard to imagine seeing yourself in the blue, catsuited, murder-loving, mysterious assassin.

I had a strong reaction to Sigma’s origins animation because I saw myself there. The gurney, the restraints, the artificial lighting, and the confusion were all familiar hallmarks of my experiences in mental health wards. It’s powerful imagery, but one that perhaps unintentionally trades in dangerous shorthand based on the stigma against mental illness.

A Blizzard character artist, Qiu Fang, wrote that Sigma’s bare feet helped “sell the ‘asylum’ look a bit more”, citing the policy of hospitals and institutions removing shoelaces from patients as a way to reduce the risk of self-harm.

When I ask the assembled developers about their thoughts on the fan reaction around Sigma’s release, the topic of feet comes up naturally.

“The feet thing reminds me of a couple of funny stories, because I remember when Jeff [Kaplan] was like ‘He floats. Why does he have to wear shoes?’” said Chu. “It’s something he felt strongly about, and it was like… OK, that makes sense. He floats, he doesn’t need shoes. Jeff was also like ‘It… it’ll be a thing’, which… [laughs].”

“The other thing was from Alyssa [Wong, Overwatch writer],” Chu continued. “She was saying — and I can’t remember how she had heard this story — but when you’re up in space, and there’s no gravity, you don’t use your feet the way you do, and the blisters and calluses and stuff just fall off.”

There’s a moment of cross-talk with Chu and Joshua Noh where the two confirm that Sigma does, in fact, have soft feet and it influences why he floats. Chu credits concept artist Arnold Tsang with his “continued interesting footwear and foot design.” 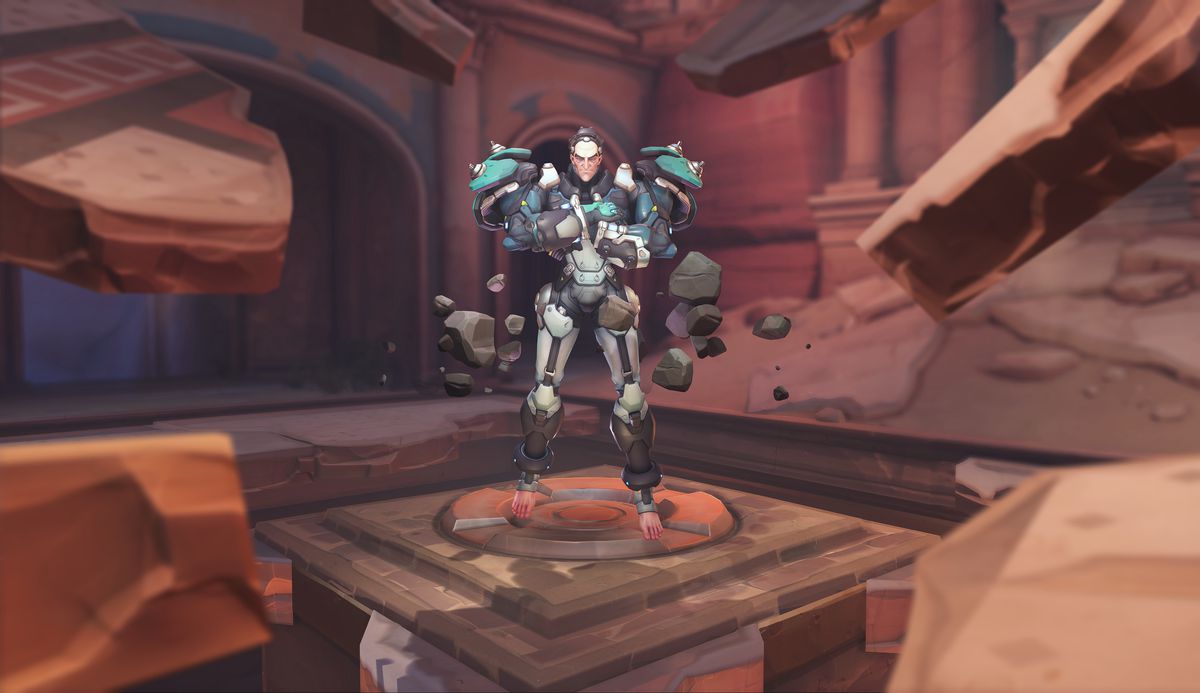 No Overwatch hero is the responsibility of any one developer at Blizzard. Sigma went through several iterations as he was developed, including a stint where developers thought the character might be Mauga, a Talon character from Baptiste’s past. His kit was eventually prototyped, and the rest was built around that kit and the idea of a gravity-based hero.

The origins animation and Sigma, as a whole, draws on established cultural understandings of mental illness. He’s described as a brilliant, yet eccentric pioneer, who’s ambition led him to undergo “serious psychological damage” that “fractured” his mind. Afterwards, he was “quarantined”, “deemed unsafe”, and “isolated.”

This isn’t a sci-fi, futuristic experience for many people; it’s an occurrence that many people dealing with the mental health system experience. The end result is that it comes across like Blizzard either wasn’t aware or didn’t think to investigate the real-life parallels of Sigma’s story. He doesn’t ruin the game for me, but he’s an uncomfortable splinter in the premise of the game.

Overwatch has been sold as a futuristic, inclusive world that is at best an utopia, and at worst, worth fighting for. When I look at Sigma’s origin animation, I see a depiction of a personal, painful experience I went through. I see a system that fails people that struggle, and sees illness as inherently dangerous.

It’s a lot to grapple with, and it raises questions. How does a game like Overwatch, which builds lore around the core experience of a team-based shooter, depict complex and multifaceted characters with inner conflicts that might match the ones real people experience?

“I think we thought this character would hit people, and they’d be like ‘Whoa! OK, that’s a lot to take in!’” says Chu. “That was very much by design.”