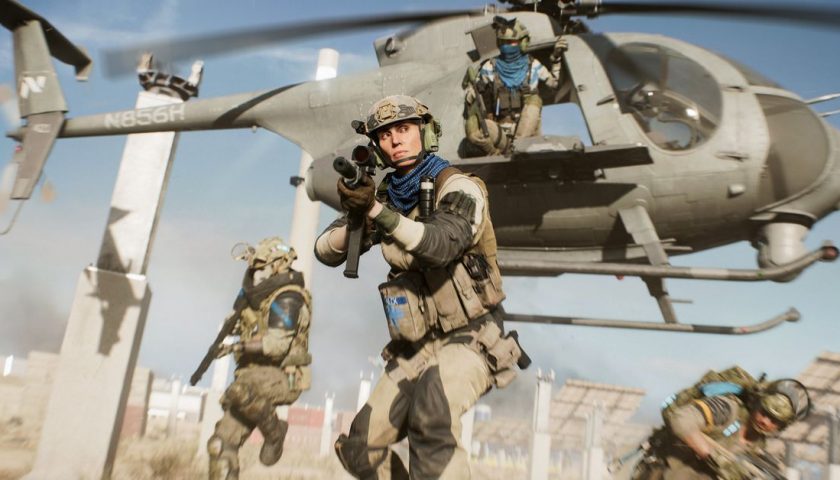 Battlefield 2042’s third major gameplay mode, following the traditional All-Out Warfare and era-blending Battlefield Portal modes, will send players into tense, team-based missions against other teams, and hopefully they’ll make it out alive. The new mode is called Hazard Zone, and the objective here, developer DICE revealed on Thursday, is not to kill your enemies; it’s to grab data drives from downed satellites and exit the battlefield before someone else — or something else, like a tornado — kills you.

Hazard Zone, DICE has repeatedly stressed since Battlefield 2042’s original announcement, is not a battle royale. It features a smaller player count than Battlefield 2042’s core multiplayer mode, with just 32 players spread across eight teams on PlayStation 5, Windows PC, and Xbox Series X. (Last-gen consoles will support a maximum of 24 players in Hazard Zone.) And the goal is not to be the last player or team standing; in fact, you can “win” a game of Hazard Zone before a match even finishes for most players.

Here’s how the new mode works: Players are inserted into a game of Hazard Zone as a four-member squad. Their goal is to locate and retrieve precious data drives from downed satellites that are scattered throughout the battlefield. Of course, other teams are also fighting for those drives, so expect firefights as you and your teammates attempt to yank out each satellite’s precious cargo. Once a team has all their drives, they head to the extraction point and fight to make it out alive.

And here’s Hazard Zone’s twist: There are only two extraction opportunities per game and only two teams can make it out alive. One extraction opportunity occurs about mid-match, DICE says, meaning players can either gamble to be the first team out, or bide their time and hold out for the second extraction (and maybe pick up even more drives with the extra time) at the end of the match.

Players start each game of Hazard Zone with a briefing, and some time to buy and equip gadgets. Those gadgets include an Intel Scanner device, which helps pinpoint the location of downed satellites, and a Reinforcement Uplink, which can revive a dead teammate. Players spend money earned from previous Hazard Zone matches on these tactical upgrades; drives you successfully extract in games can be cashed in for a currency called Dark Market Credits. Other tactical upgrades include faster healing, the ability to carry more drives at once, advanced intel on satellite drop locations, and even Loadout Insurance, which halves your Dark Market Credits losses if you die during a match.

While teams will be inserted into the battlefield with satellites already scattered throughout the map, more satellites containing (even more valuable) drives will also fall during the course of the game. Players will have to re-strategize on the fly, as they fight to recover as much data as they can. Extraction points take place at two random locations on the map, and if just one member of a team successfully makes it out, the whole team wins.

Battlefield 2042’s Specialist classes will carry over to the game’s Hazard Zone mode, so players will have to also consider team compositions when planning their insertion, retrieval, and extraction plan. (And yes, those Specialists include Battlefield 4’s Kimble “Irish” Graves, played by the late Michael K. Williams. DICE is putting Irish front and center in Hazard Zone’s marketing artwork.)