Respawn Entertainment introduced a new character named Octane to Apex Legends this week, and sharp-eyed fans noticed that the inspiration for the character’s backstory came from the Titanfall 2 speedrunning community.

A player who goes by Cash Mayo currently holds the world record for running the Gauntlet in Titanfall 2 in exactly 12 seconds, a feat they were able to accomplish by gaining speed using well-placed frag grenades. You can watch the video below to see just how precise their movements needed to be in order to get their time that low. It’s fun to watch.

Respawn Entertainment was impressed as well, as that video seemingly inspired Octane’s backstory.

“Heir to the preoccupied CEOs of Silva Pharmaceuticals and wanting for nothing in life, he entertained himself by performing death-defying stunts and posting holovids of them for his fans to gawk over,” the official description of Octane explains. “So, this day, he decided to set the course record for a nearby Gauntlet by launching himself across the finish line — using a grenade.”

That explosion blew Octane’s legs off, but they were replaced with mechanical substitutes that allow him to run even faster. Octane’s first trailer references the Gauntlet speedrun, and the trailer even links out to Cash Mayo’s record-setting run if you click on the “What is the gauntlet” annotation that pops up during the trailer at the 12-second mark. 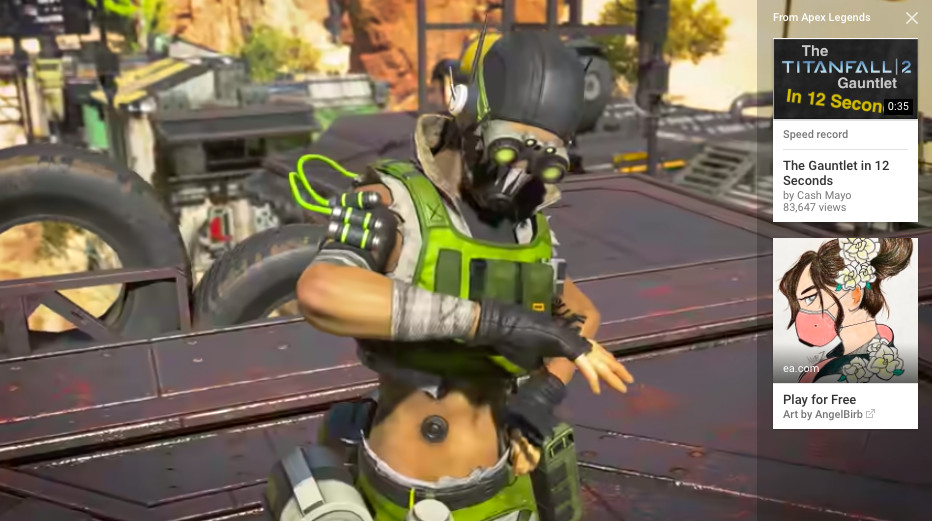 As for Cash Mayo themselves, they’re taking the news in good spirits.

“Sneaky little mention there. Respawn is clever…,” they wrote in the reddit thread. “Wait, the gauntlet is a VR simulation. So how’d he really lose his legs? Sounds like a cover-up… WAIT. Respawn actually linked to my gauntlet run in their ‘Meet Octane’ video. YOOOO, in shock [right now].”

This is certainly one way to make sure the fans of your games feel noticed.