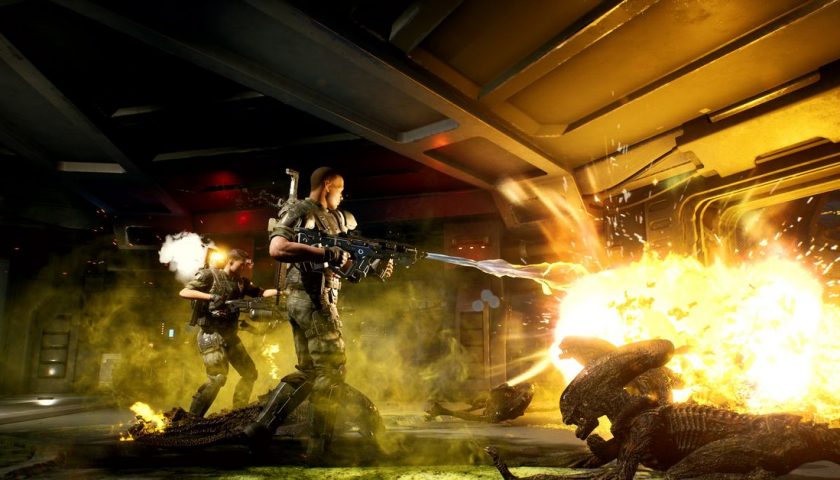 The distinction between Alien and Aliens is clear to any fan of the franchise: When dealing with plurals, expect a firefight. Such is the case in Aliens: Fireteam, a new third-person, cooperative survival shooter where players take on the role of a green Colonial Marine who knows exactly what they’re getting themselves into.

Aliens: Fireteam is set after the events of Alien 3, when the deadly Xenomorph is no longer secret or myth, developer Cold Iron Studios said in a preview event held over Discord. The Colonial Marines of Fireteam have the tools and the talent to take on alien threats, and are dispatched en masse by government order to clean house at remote space colonies.

But that doesn’t mean this will be a simple bug hunt; Cold Iron promises an intense challenge, with 11 Xenomorph types, deadly Weyland-Yutani synthetics, and other enemies awaiting players on the surfaces of far-off planets.

The Colonial Marines of Fireteam are by no means defenseless, head of Cold Iron Studios Craig Zinkievich said in a presentation. Grouping up in teams of three, players will have weapons and class-specific talents to help them in battle. Weapons include the standard-issue M41A Pulse Rifle and fragmentation grenades, but also new inventions like charge coils: sticky shock grenades that stun Xenomorphs in place.

What you bring into battle with you depends on your class. Fireteam has five classes: Gunner, Demolisher, Technician, Doc, and Recon. There are a few fun surprises, like an auto-turret for the Technician, an “overclock” ability for the Gunner (it doubles fire and reload rates for the whole team temporarily), and an area-of-effect blast wave for the game’s heavy class, the Demolisher.

Each player has a role, Zinkievich said, and classes are built with tactical synergy in mind. We saw that in practice during a gameplay demonstration, played by Cold Iron staffers. The Colonial Marines found themselves backed into a corner, waiting for an elevator to arrive while fending off swarms of Xenomorphs. The swarm was a blend of Fireteam’s many alien strains: Spitters, Warriors, and Bursters, a Xenomorph packed with giant sacs of acid. The team’s Technician set up a turret in front of a nearby air duct, and the Gunner and Demolisher did the heavy lifting of Xenomorph-slaying, aided by the Technician’s aforementioned charge coils.

The developers survived their mission, naturally, but players at home may not find Aliens: Fireteam so easy. “It has to be challenging,” Zinkievich said, but he recognized that some players may just want to experience the game’s four story-driven campaigns. There will also be easier difficulty settings for players who want them, as well as Challenge Cards, mutators that modify how Fireteam plays. This should let players enjoy high-risk, high-reward scenarios.

Cold Iron is designing Aliens: Fireteam to be highly replayable. While players will start as a fresh Colonial Marine with a generic slate of skills, they’ll be able to level their soldiers up and unlock new weapons, abilities, and customizations over time. The studio promises “an extensive arsenal” of more than 30 weapons and more than 70 mods and attachments, plus a Perk Board that enhances and modifies players’ abilities.

The developers say they expect players to revisit the game’s four campaigns, each of which is composed of three missions, and maybe play through a full campaign or just a single mission in an evening. The game is designed to be played cooperatively as trio, with AI-controlled allies filling in any open slots. The developers hope that the variety of Xenomorphs, which include Facehuggers and giant-sized Praetorians, alongside multiple difficulty levels, will keep players coming back.