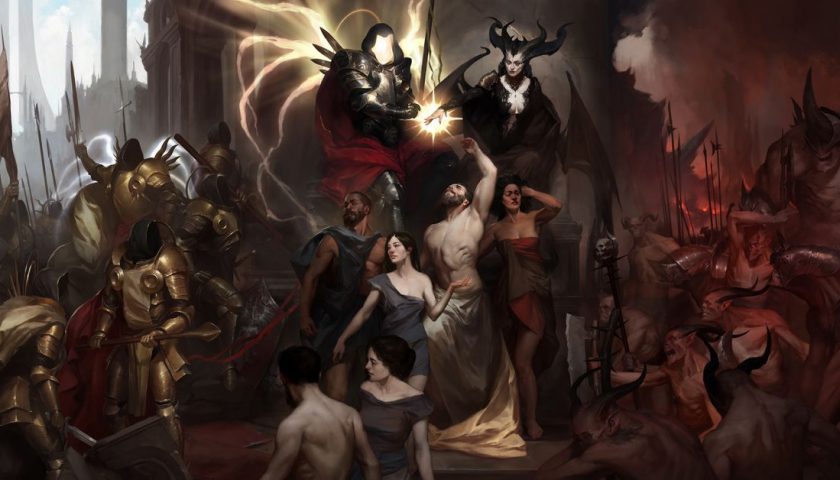 Blizzard put out its final Diablo 4 blog of the year on Monday, and it came with a variety of information. The topics range from loot, to Legendaries, to the new Paragon system and visual effects.

With the blog post clocking in at around 3,500 words, it’s a little intimidating to look at. Here are the five things you need to know:

In Diablo 4, some items will have bonuses for certain skills like “+4 to Flay.” The more bonus points a skill has, the more powerful and useful it becomes. If players haven’t unlocked that skill yet, they’ll be able to use it as long as they keep that piece of gear equipped — even if they’re too low level.

You can transfer Legendary powers with a new NPC

The example in the blog post is a Barbarian axe with the Pent-Up power, causing Fury skills to do bonus damage the longer you abstain from casting them. The Occultist breaks down the Legendary axe into Pent-Up Essence (destroying it in the process). The Essence item then says you can use it on a Rare one-handed weapon, two-handed weapon, gloves, rings, or an amulet.

One of the smaller changes highlighted in the blog post is to help players hunt down certain items. Instead of loot being the typical Diablo free-for-all, certain monsters will obsess over certain item types. For example, bandits tend to carry maces, crossbows, and boots. Players who need a new pair of Legendary pants should try hunting down a pack of drowned enemies.

It’s a little silly, having to hunt the pant obsessives if you want a better shot at those trousers you have your eye on, but it should make farming a bit more friendly.

The Paragon system has some Path of Exile skill tree vibes

The Paragon system is the focus of the most complex section in the blog post. Once you reach level 50, you’ll start gaining Paragon points — similar to how you got them in Diablo 3. But instead of just investing them in stat increases, you’ll unlock new nodes on a giant board.

Each class starts with their own board, and they can use points to unlock nodes on a variety of paths. There are normal stat nodes, magic nodes that give bonus stats, rare nodes that give mild effects, and a single Legendary node that gives players a new Legendary power. There are even Glyph sockets on the board, allowing players to slot in special items found in dungeons, offering new effects.

You can also adventure to the end of your board, which allows you to attach a new board (complete with a new Legendary node) onto your old board. You can keep building onto these boards in perpetuity, increasing your power dramatically over time.

Finally, the team goes over some powerful visual improvements coming to Diablo 4. One of the more interesting changes is that certain classes will have unique destruction effects on enemies. Like in Diablo 3, enemies will pop with electricity or burn with fire spells, giving a unique death animation. But the feature is a little more unique in Diablo 4.

Sorceresses can freeze and burn monsters, while Barbarians can slice them in half or crush them. Rogues are able to spill a monster’s guts onto the field, or poison them, causing their skin to melt off. Druids can crush enemies with boulders, leaving a smear on the ground, or cause them to explode with lightning.

Each class has their own little list of effects listed in the blog post, which includes a forward from Diablo 4’s new game director, Joe Shely. He replaced former Diablo 4 game director Luis Barriga, who departed the company in August after the state of California filed suit against Blizzard over harassment claims. More than 40 Activision Blizzard employees have been disciplined in the months following the initial lawsuit.

California’s Department of Fair Employment and Housing’s (DFEH) investigation found that women are paid less and subject to sexual harassment at Activision Blizzard, without meaningful punishment applied to perpetrators. In the period since the lawsuit was filed in late July, the DFEH has expanded its complaint to include allegations that Activision Blizzard “suppressed” evidence in its investigation. The company denies that claim.

Activision Blizzard is currently facing multiple lawsuits and a U.S. Securities and Exchange Commission investigation. One of its lawsuits, filed by the U.S. Equal Employment Opportunity Commission, was settled for $18 million earlier this year.

Workers at the company, too, continue to speak out on social media and elsewhere to encourage substantial change. You can read more about the allegations against Activision Blizzard in Polygon’s explainer.