The following is adapted from YouTuber Patrick Willems’ new video essay “Rewriting the Matrix Sequels.” Watch the full video above.

The Matrix sequels arrived at the perfect time in my life. I was 15 years old and had spent four years watching the original 1999 film more times than I could possibly count. In the months leading up to The Matrix Reloaded’s May 15th, 2003 release, I scanned the internet daily, and not just for news about the movie — for whole pieces of world-building that were being rolled out early.

Because The Matrix Reloaded wasn’t just a movie. Lana and Lilly Wachowski’s sequel was the centerpiece of what was, and might still be, the most ambitious piece of transmedia storytelling ever attempted. The Wachowskis weren’t content to make two back-to-back sequels with massive budgets, pioneering visual effects technology, and full creative control. They also wanted to work in other mediums they loved: comic books, anime, and video games.

Shortly after the release of the first film, The Matrix Comics — a series of short, graphic stories — began popping up on the film’s official website. None of these were essential pieces of the mythology, but rather opportunities for some of the Wachowskis’ favorite writers and artists to tell stories within the world they had created. The comics were collected and published in book form in 2003.

Leading up to the release of the sequels, the idea of The Matrix Comics expanded into The Animatrix, a collection of nine animated short films, created by some of the world’s most acclaimed anime directors and animation studios. The Animatrix was released on DVD a month after Reloaded hit theaters, but a few chapters premiered early thanks to the glory of Quicktime video.

The first Animatrix installment, “Final Flight of the Osiris” premiered in theaters that March, playing before the Stephen King adaptation Dreamcatcher (another Warner Bros. Pictures release). The nine-minute short film, written by the Wachowskis, is set right before the events of Reloaded and functions as a prologue. After playing in theaters, the short then premiered on the official Matrix website. This was an essential part of the story the Wachowskis were telling, and they wanted as many people to see it as possible. (Only one other Animatrix chapter is directly connected to Reloaded: “Kid’s Story,” from Cowboy Bebop creator Shinichirō Watanabe, which, unsurprisingly, tells the backstory of the character referred to only as “The Kid.”)

The Wachowskis’ ambition really showed in the video game Enter the Matrix, released the same day as Reloaded for PC, PlayStation 2, Xbox, and Gamecube. The game’s narrative picked up right after “Final Flight of the Osiris,” connected to the beginning of Reloaded, then ran parallel to the film’s story, with occasional intersections. Throughout the game, instead of the usual CGI-rendered cutscenes, there were 40 minutes of live-action scenes produced simultaneously with the films. These were shot on 35mm film by cinematographer Bill Pope, directed by the Wachowskis, and featured much of the cast, including actors Jada Pinkett Smith (Niobe), Monica Bellucci (Persephone), and the Oracle (Mary Alice).

Being 15 and voraciously consuming every piece of Matrix media available meant watching the Animatrix shorts as soon as they premiered online, seeing Reloaded opening night, then buying Enter the Matrix the very next day in order to beat it by the end of the weekend. I got exactly the experience the Wachowskis intended, with each piece fitting together to create something greater than the sum of its parts.

Believe it or not, watching Reloaded in 2019 is a different experience than “plugging in” as a 15-year-old. There’s no marketing and hype machine pushing the narrative that you have to watch and play everything to get the full story (and unless you still own an old console, it’s nearly impossible to play Enter the Matrix these days). Sixteen years later, The Matrix Reloaded is just a movie, and watching it without the connected media, there are aspects of the story that feel incomplete.

“Final Flight of the Osiris” depicts a whole cast of characters sacrificing their lives to send a warning to the Reloaded’s heroes, establishing the main threat that will drive the film. When you watch the sequel without that introduction, the stakes never feel as real, since they’re just introduced via a quick piece of expository dialogue.

Similarly, “The Kid” shows up and keeps referencing a prior history with Neo that the film never explains. Without having seen his animated backstory, we’re left wondering, Who … is … this …?

The main characters of Enter the Matrix, Niobe and Ghost, have relatively brief screen time in the actual film, disappearing for long stretches so that their story can be told in the game. Even in 2003 there was criticism of the approach. In Edge magazine, Steven Poole wrote, “It seems the film itself has been deliberately made to suffer, to donate some of its lifeblood so that its vampiric brood can feed on it. In Reloaded, Niobe and her crew go to blow up the nuclear power plant, a feat of security bypassing which would presumably require something like a lobby scene squared. Instead, we see nothing until they are already in the control room. Why? Because that’s what you get to do in the game instead.”

The Wachowskis’ great ambition was to tell one massive story across several pieces of connected media. But if you removed any of those pieces, the story suffered. 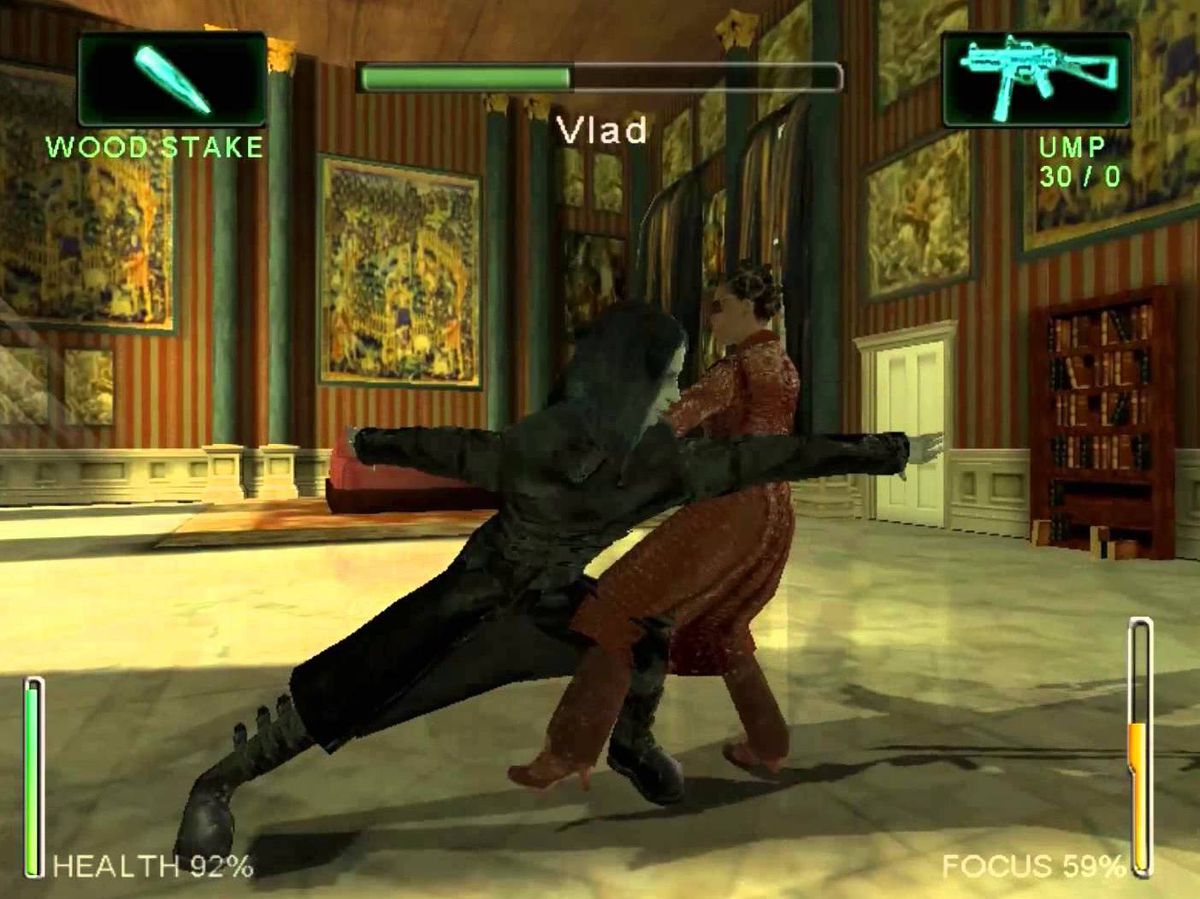 “Transmedia storytelling” is an idea that was first given a name by media scholar Henry Jenkins in a 2003 essay, published just months before the release of The Matrix Reloaded. In the essay, he cites properties like Pokémon (which exists as a video game, animated TV show, and collectible card game) or Star Wars and Star Trek (which are movies, TV series, books, comic books, etc). Maybe the earliest example was Splinter of the Mind’s Eye, the 1978 Star Wars sequel novel, published just a year after the original film.

But while these expanded universes existed for years, the spinoffs and connected media were never required. When the Star Wars prequel films arrived, they didn’t assume the audience had read the EU novels (it’s questionable whether even George Lucas himself had). The Matrix sequels set out to change that mentality, making the transmedia experience the equivalent of a comic book crossover event, in which you need all the pieces in order to get the most satisfying story.

Nothing on the scale of what The Matrix did in 2003 has been attempted since, but similar ideas, handled more subtly, have become commonplace in major franchises.

In 2015, Kiki Wolfkill was promoted to “Head of Transmedia” at 343 Industries, the studio behind the Halo franchise. There she oversees the development and release of comic books, novels, audio drama podcasts, and web series, all connected to the primary video game releases. In a 2012 interview she described their transmedia approach thusly: “We can tell different stories that cross paths, and for people who participate in all those stories, it’s amazingly gratifying. But there isn’t the level of dependency where have to have read that or played that or seen that to understand what’s happening. We really want multiple entry points into the Halo universe.”

One of the most noticeable shifts in transmedia philosophy came after Disney acquired Lucasfilm in 2012, and set out to re-establish the Star Wars canon. Before, there were so many novels, comic books, and video games — all technically part of the same continuity — that it was difficult to keep them all straight. Only the films felt truly essential, since you didn’t get the sense that George Lucas paid much attention to the endless stream of connected works in what became known as “the expanded universe.”

But after Disney bought the franchise, and plans for new films began moving forward, the expanded universe was officially wiped from the canon. Disney would start fresh, carefully selecting what stories to tell in other media. The new Star Wars comic books and novels would now take place at very specific points in established continuity, telling stories designed to fill in gaps and provide greater context and background for characters from the films. Those curious why C3PO has a red arm in The Force Awakens had a comic book to explain that. Anyone who thought Captain Phasma got shortchanged in the backstory department had a novel to fall back on.

Marvel Studios took a similar approach in the road to Endgame: A viewer didn’t have to see every single movie in the Marvel Cinematic Universe to enjoy whatever new one was about to come out, but doing so would enhance the experience. Marvel TV shows either followed characters from the movies in new stories (Agent Carter and Agents of S.H.I.E.L.D.) or told stories adjacent to the movies (Daredevil, Jessica Jones, and the other Netflix shows). Marvel Comics published a number of books set in the MCU continuity, usually prologues to the various movies, but they were all supplementary. None would be classified “required reading.”

Wachowskis had ecstatic, impossible optimism absent from these modern transmedia projects: They believed everyone would be as excited as they were to follow the story of The Matrix into video games and animated short films. And there was no sweeter tune to the ears of a 15-year-old swept up in the hype of their movies.

But the majority of audiences will always choose the simplest viewing experience. They’ll go to the movie theater to see the new installment in a series — but asking them to buy a separate DVD or play through a video game or, god forbid, read a comic book, is out of the question. And so the legacy of Matrix sequels and their connected media is as a grand, not entirely successful experiment, a lesson from which other franchises could learn and refine their approach.

In many ways, it’s a pattern that has defined the Wachowskis’ work: They were doing something audiences weren’t quite ready for, that might have been a little overly ambitious. But the ripples from its impact can still be seen more than a decade later.

Patrick Willems is a filmmaker. He lives in New York City, where he makes videos.