Total War: Three Kingdoms is the 12th game in Creative Assembly’s historical warfare simulation, coming out for Windows PC on May 23. I recently played a build in which I was able to tinker around with the game’s early campaigns. One of the most appealing aspects of this game is how far, and how deeply, it simulates the kingly management of barons and other nobles.

Total War games simulate the ruling of historical kingdoms and empires, allowing me to test my leadership skills both in court, and in battle.After decades of playing historical strategy games, I’ve been conditioned to believe that successful overlordship mainly comes down to logical organization of resources and basic tactical awareness. And sure, Three Kingdoms looks like a well-honed simulation, in terms of resource management and combat simulation.

Economics, geography, social conditions, climate and pure good fortune are all part and parcel of this game’s take on feudal rule. Three Kingdoms simulate these along predictable, quasi-mathematical lines. The player is free to exploit the simulated matrices by growing a set of resources, which amount to armies and defenses.

But Three Kingdoms also offers complex leadership tools, which make use of the personalities and qualities of subordinates. Its overlapping systems of people-management are an advance on previous games, offering multiple layers of tinkering, ranging from skill trees to equipment to relationships. Yes, there are plenty of military sims that make use of subordinate management, but its woven into Three Kingdoms’ very core, cleverly twisting multiple threads into the shapes of convincing human beings.

This is a game that seeks to satisfy the common fantasy of leasing a small, ancient kingdom to conquest and glory. But success in the field and at home is heavily dependent on how I manage my nobles. As a fan of feudal history, this feels like a welcome emphasis. Successful rulers in real history were generally skilled at manipulating the powerful men and women around them. 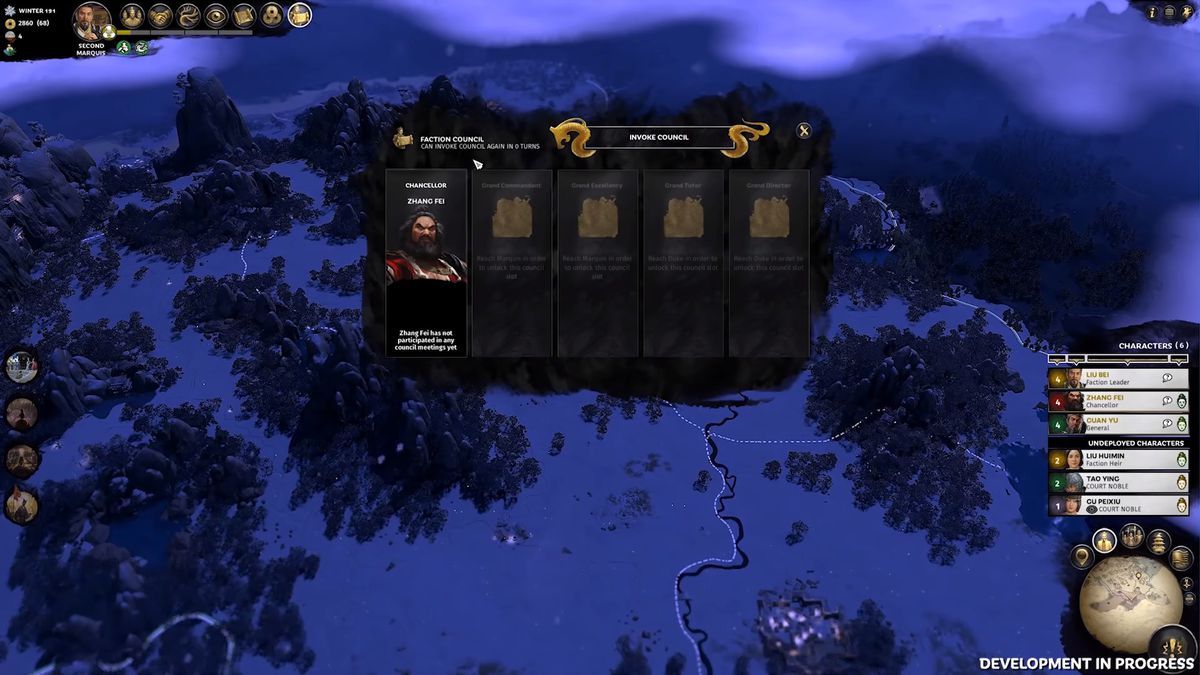 I’m no expert on ancient Chinese history, but The Three Kingdoms period looks like a smart Petri dish of historical power simulation. Temporally squeezed between two dynasties, it was a chaotic time in which dozens of fief lords fought and eliminated one another, in an attempt to both survive and ultimately rule all of China.

It began in the late second century AD, but the “Three Kingdoms” name refers to the third century, during which the political landscape had stabilized into three rivals. Playing this game, I’m learning a ton about the dazzling military technologies of the time, the social mores of court life, and the personalities who inhabited that world.

In the early part of the game, I choose to take control of a small kingdom, at the North East margins of ancient China. My avatar is Gongsun Zang. This is the easier option among the many lords I can choose to play, because it keeps me away from the attentions of the powerful tyrant Dong Zhuo at the center of the map, while protecting me from attacks from the rear. Gongsun Zang is also close friends with Lui Bei, another powerful warlord, who will make a useful ally.

My immediate neighbors are relatively weak, and I’m quickly able to outpace them economically, funding large military expeditions that find rapid success. As my empire expands to triple its original size, I come up against other expansionists.

These are more difficult to subdue, often requiring temporary military alliances that weaken mutual foes, until shared goals morph into territorial competition over the spoils of victory. And so the process goes on, until I reach a point when my power is such that I can make a claim on full suzerainty of China. As I progress, I gain new titles and honors, as well as new skills and weapons.

During this time, I negotiate tricky diplomatic problems, such as forming or rejecting alliances, or working against coalitions of leaders that threaten my position. My actions shape my reputation, which informs the kinds of deals I’m able to make with neighbors and rivals. Enemies sometimes come to understand that they cannot stand against me, and so offer to submit, saving me the chore of cleaning up their remaining armies and cities. 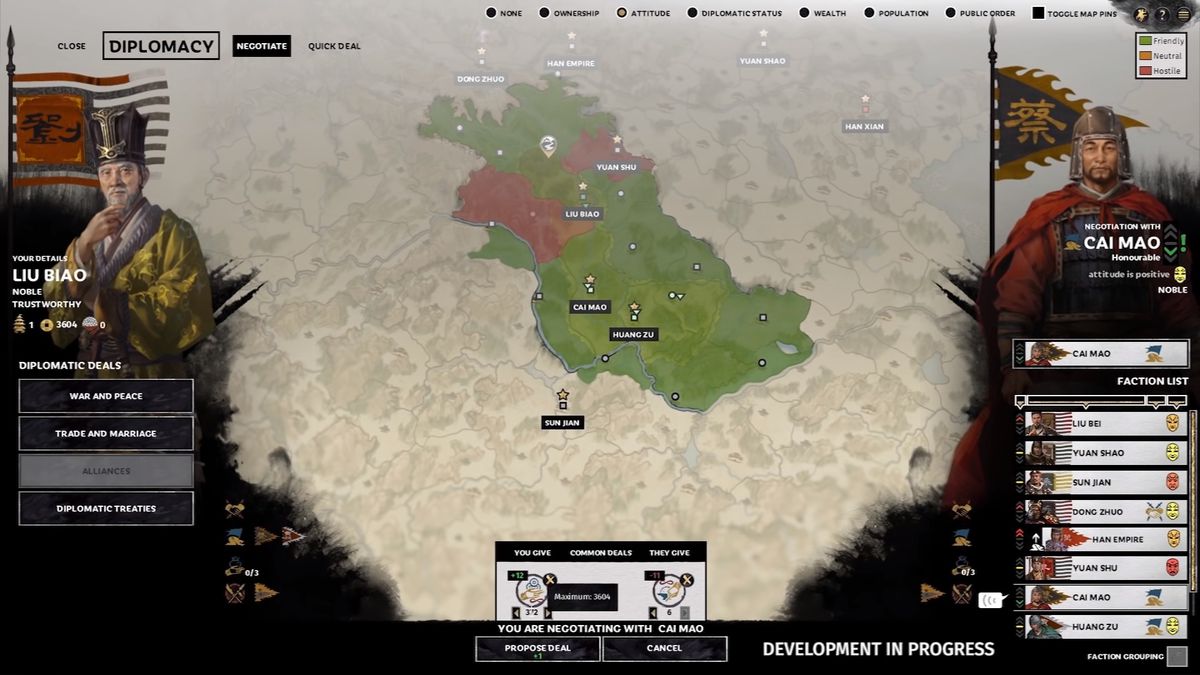 This grows my landmass, my financial power and my economic might. It also increases the number of nobles under my protection. And this is where things get interesting. My nobles have the power to raise armies on my behalf. They also come with special powers, such as buffs that improve their armies’ performances, or highly specialized units.

But they are nobles, and as such, they are ambitious and prickly. I study their strengths and weaknesses, and I look to their state of happiness, their personalities and their relationships with my other generals. I give them positions at court which boost their happiness and their usefulness to me. I give them gifts like new weapons, upgrades and helpers. I make sure they work alongside people whose company they enjoy, and I keep them away from those who they despise.

I also take care that they are not working as spies for my enemies, or I place them as spies in enemy courts.

All this adds up to an immense amount of careful management, shifting emphasis away from the humdrum of upgrading cities and expanding borders, to the more instinctive business of really getting to know my people. It feels like a slicker version of court management than I’ve played in previous Total War games, with a more solid impact on my empire, and on my individual battles. 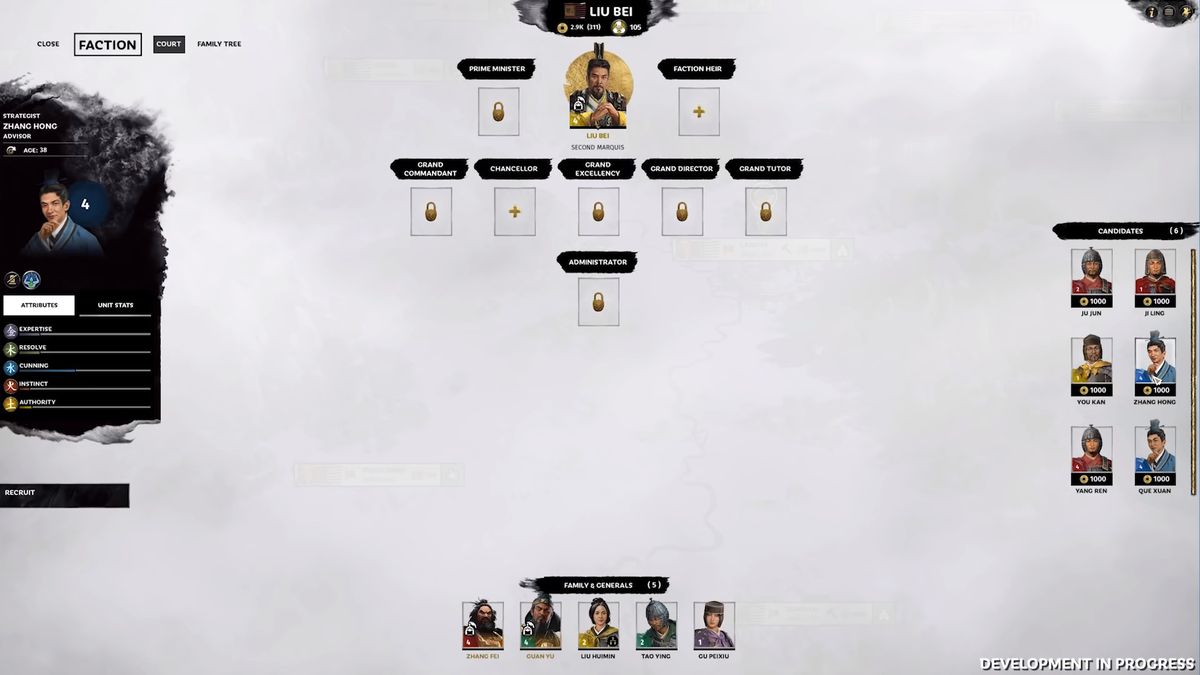 As I say, I’ve only played the early parts of the game, so I’m yet to unlock most of the systems and perks to do with managing generals. But as I progress through upgrade trees, increasing my abilities, I find myself excited about creating a team around me, who’ll undertake my conquest. I’m curious to see the kinds of mistakes I might make, that I might learn from. I want my guys to be strong, but I also want them to be loyal. This feels like a balancing act that I will enjoy.

In the field, the basics of Total War remain much the same as in previous games. The most important thing is to show up with a large army of well-trained soldiers, to ensure varied modes of attack (range, artillery, cavalry, infantry), to choose advantageous terrain, and to avoid the kind of over-reach that opens gaps for the enemy or that exposes flanks, or that results in large scale slaughter of vulnerable units.

Beyond that, Three Kingdoms offers larger armies than ever before, increasing the difficulty of implementing coherent in-battle plans.It also makes Total War’s battle scenarios even more spectacular. There are few pleasures in gaming quite as grand as swooping Total War’s camera right into the heart of a battle that’s in full flow.

A bigger change in managing combat brings us back to the management of generals. They all come from different classes, so some are better for frontal charges, while others aid range units, or boost morale. This makes a huge difference to my battle plans. I can also tweak my generals as I upgrade them, choosing to either focus on their natural advantages, or boost their lower ratings. I can improve their mounts, weapons and armor, selecting from options that best suit the situation.

Total War games can be somewhat hit and miss, in terms of the kind of play that surround their core activity of managing great battles. I feel that Three Kingdoms’ focus on personalities and individuals is going to offer entertainment, challenge and some intriguing leadership problems. We’ll have a full review in the weeks ahead.