There was a moment during my first playthrough of Close Combat: The Bloody First when it felt like everything was going wrong. It wasn’t simply that my strategy wasn’t working, or even that I had made a mistake that put the lives of my little AI soldiers at risk. Rather, it felt as though the game itself was broken, that it had actually stopped responding or maybe even gone a little mad.

But it hadn’t. In that moment, what I was seeing was actually evidence that The Bloody First was doing something extraordinary, something that I’d never seen another title in the nearly 20-year-old franchise do on its own before. It was amazing.

Close Combat: The Bloody First is the long-delayed, all-new version of the classic tactical strategy franchise. Playing an early beta build, I was two missions deep into Operation Husky, leading a company-size element against prepared Italian and German positions on the island of Sicily. 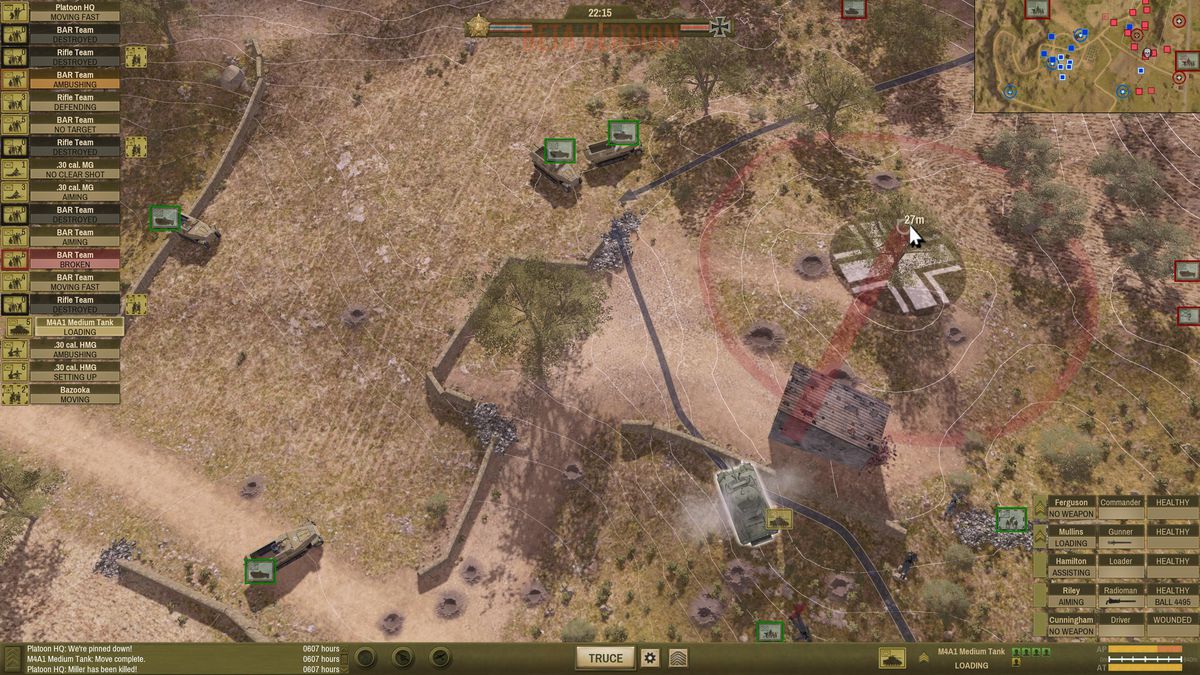 Seeing your only tank charging headlong into the enemy, completely unable to stop it, is terrifying. But sometimes it works.
Matrix Games

Just like other games in the franchise, The Bloody First is played from a top-down perspective. Players issue orders to individual units, and watch the action play out in pausable real time. Under the hood, a fairly robust simulation crunches the numbers. The game models everything from ammo counts and armor penetration, line of sight and unit cohesion. Push your troops too hard and they break, running off on their own to hide or even surrender.

The mission at hand was a proper assault against hastily prepared enemy defenses. I was spending a lot of time probing the edge of a hilltop objective well ahead of the main force, micromanaging several light infantry teams by ordering them to move quickly from cover to cover.

That’s when a pair of heavy infantry teams that I had placed in reserve took off at a run. I hadn’t told them to do anything, but up they went, running like little mad men right across the middle of the battlefield. Then two of my light machine gun teams, positioned along my left flank, opened up and began firing over their heads. It looked like a disaster, but it was actually the opposite. 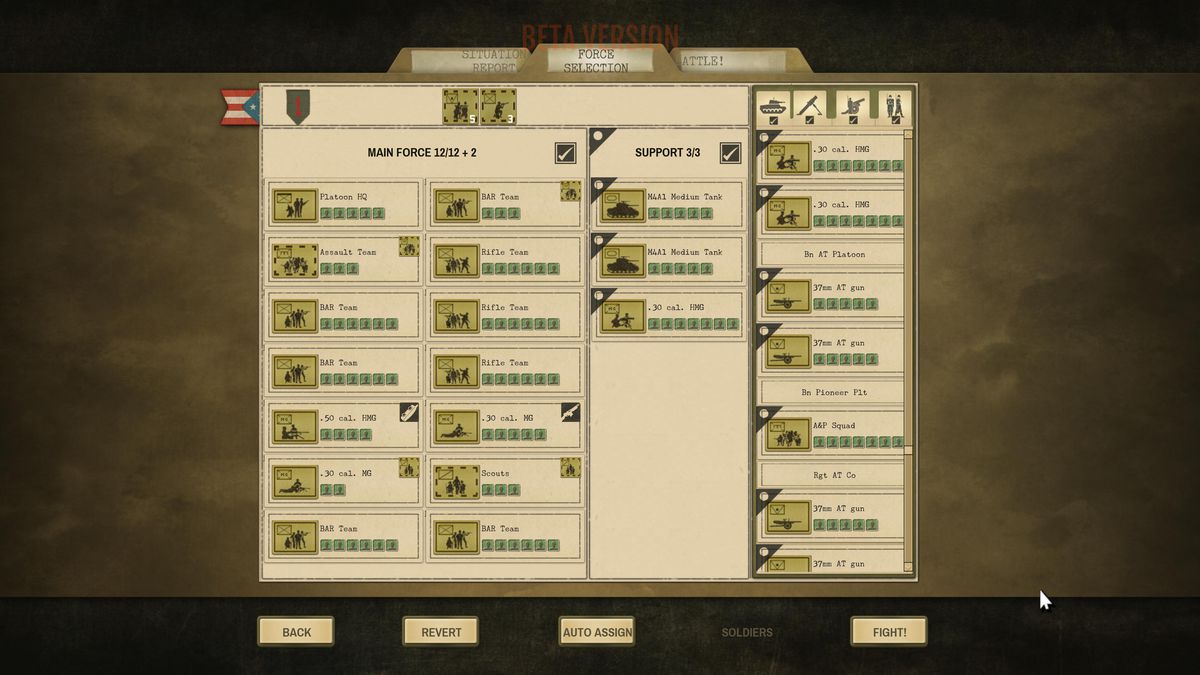 Close Combat: The Bloody First gives you lots of options for organizing your forces ahead of a battle. It also lets you choose how to long to prepare between engagements. Taking extra time gives you access to additional resources, but may put the final objective out of reach.
Matrix Games

Those heavy infantry teams were launching an attack all on their own, and they weren’t going to let me stop them. In fact, they had a better plan than I did.

The Bloody First models the concept of command and control, just like other games in the Close Combat series. But it also models initiative and improvisation, right down to level of individual soldier. The team leaders of those heavy infantry squads stood their men up and advanced all by themselves. I clicked on them, desperately trying to stop them. That they didn’t respond wasn’t evidence that the game was broken. Either they were too far away from my platoon commander, or they were just too stubborn to listen to orders. So they kept on running.

Glancing at the mini-map, that’s when I saw the enemy units in the open several hundred meters away. They were exposed, crossing open ground at a run toward a position that had overwatch on the same hilltop objective I had been advancing on. I hadn’t even seen them. I watched with growing fascination as the light machine gun teams fixed them in place with accurate fire at range.

The Bloody First is the first fully three-dimensional title in franchise history, built from the ground up on a custom engine. That’s part of what’s taken the game so long to come out. With the action paused, I was able to hold down the control key and move my mouse around, casting a visible shadow in the map that revealed line of sight from my machine gun nests right into the thick of the enemy formation. It was something that the machine gun spotters had seen before me.

This time, rather than countermand them, I let them keep firing.

Sure enough, the cover fire allowed my heavy infantry to gain ground. Moving through a gully, they crested a hill and finally brought their Browning automatic rifles to bear at close range. Over the next minute they destroyed the Italians in detail. The bold charge and coordinated support had stalled the enemy reinforcements, opening up a path to flank the hilltop objective that had original captured my attention.

After those two AI units had lead the way, now it was my turn to find a way to position the remainder of my units so that I could effectively support them.

The trouble with this build of The Bloody First is that so much of the action is obscured by a tiny user interface. Much of what happened in the above scenario was invisible, and had to be inferred from the feedback — or lack thereof — from the AI units under my control. They only way I could tell that my heavy infantry was doing something unusual was when they didn’t respond to me in the usual way. That lack of control created a sense of panic, when instead it should have brought joy.

In motion, allied units report their status back all the time, telling you if they’re scared or pinned or out of ammo. It’s vital information, but the only way to access it is through a tiny little three-line window in the lower left-hand corner of the screen. You can pause the game and scroll through it if you like, but that’s time consuming and ridiculous. There was more visibility and feedback in the user interface of the original Fallout.

Developer Matrix Games is doing some incredibly interesting things with The Bloody First. It just can’t seem to find a good way to show players how or when it’s doing it. Of course, maybe that’s on purpose. Maybe they’ve committed to the concept of simulation, and the “bad” user interface is just part of their way of showing what it was like to be a battlefield commander in WWII. If that’s the case, then this game may go well over the heads of even moderately hardcore strategy gamers.

Here’s hoping something changes in the lead up to release.

Sadly, I can’t tell you when that release might be. Close Combat: The Bloody First was once expected in 2014. Then it was supposed to be out last year. Representatives tell Polygon that now the game is now expected before the end of 2019, but there’s no official date or even a promise of one.

Applications to participate in the beta are open now.