The Sims 4 has been routinely bolstered and improved by new expansion and game packs since its 2014 release. Sometimes, this add-on content is centered around one big feature, like the Strangerville storyline, the Vampire system, or the Fame mechanic. The newest expansion, Island Living, is different, focusing less on a mechanic, and more on the feel of a specific place.

Island Living drops players into Sulani, the first Sims 4 world built with the game’s new terrain tools in mind. Sulani, from the start, has more texture and life than The Sims’ typical flat, square lots on which I build. Each lot in Sulani has a built-in landscape, like rolling hills and sloped paths that lead down to a gorgeous beach.

I can send a Sim out to get a tan, anger the island’s elemental spirits, or watch the nearby volcano erupt and wreak destruction. Or I just can just chill, as baby turtles hatch on the beach and waves lap at the shore.

Escape from the city

This expansion pack feels more optional than some of the other The Sims 4 upgrades; the new content is heavily concentrated on Sulani and creating the perfect island getaway. Much like the previous urban-based expansion City Living, Island Living is centered around executing a core concept in as many ways as possible. The question is merely whether a player is interested in engaging with that fantasy.

If you do find the idea of a perfect island oasis intriguing, then Maxis has done an excellent job crafting Sulani and its inhabitants. The island that can be impacted by the locals and the unpredictable weather. Sims clean up pollution over time, and its unique climate includes sunny skies and monsoons alike.

The Sims is at its best when the mundane and the wild are married together, and Island Living excels at this. For instance, there’s a new kind of Sim: mermaids. They can either be created, or human Sims can buy magical kelp to transform into a mermaid.

I created a new family of mermaids, and we frolicked on the beach. Later, my Sims attended a cookout that was cut short by a thunderstorm. While most of the Sims fled for shelter, my two mermaids laughed and ate hot dogs in the rain. Later, one of my mermaids would become best friends with a dolphin.

New toys in the sandbox

Island Living has added a bevy of small tools to facilitate telling these cute, dollhouse-style stories. Mermaids are a very simple occult type compared to vampires; they don’t have skill trees or major social drawbacks. Instead, their “hygiene” bar has been replaced with “hydration.” Mermaids must frequently return to water (even if it’s just a bath or a sink), and then they can use their hydration to summon storms or sing a variety of siren songs.

There’s a new work from home career, the Conservationist, with two branches and unique reward traits. The fishing skill has been completely overhauled, along with new island-related part-time jobs and side gigs like dive instructor and lifeguard. There are new cosmetics. Sims can tan. Houses can be built atop stilted foundations. And players can learn about a Sulani-specific culture and its customs and traditions. Sims who take the new Child of the Islands trait gain moodlet buffs by participating in Sulani-specific activities.

None of these new tools radically transform the game or open up wildly new paths. Instead, they’re smaller and more grounded changes. Playing a character in Sulani feels different, not just because of the new cosmetics they can wear, but because Sulani feels alive and unique without veering into being gimmicky. It’s harder to capture that appeal in one screenshot or story; instead it’s a bunch of smart, sometimes easy to overlook modifications that fill The Sims 4 out and reinvigorate my interest in the game. 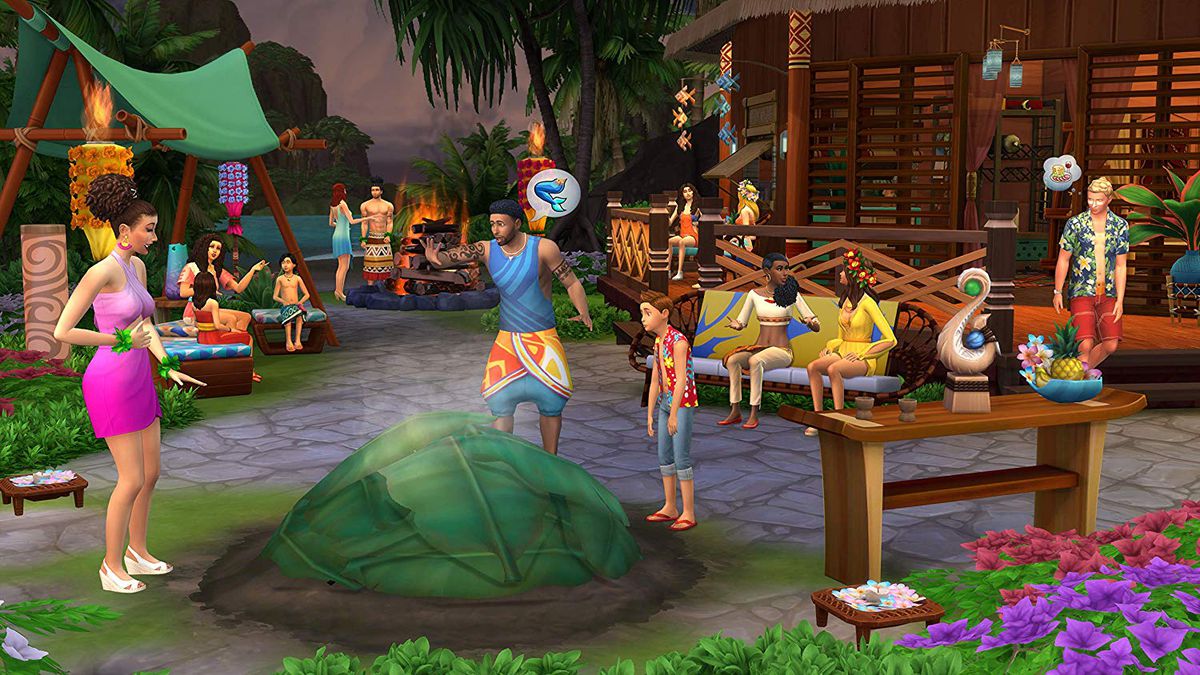 Getting away from it all

Maxis has made a version of The Sims 4 that I find more relaxing and calming than a more manic, over-the-top version would have been. It’s also more welcoming than its predecessors.

This is the first time in a Sims game that there is a starting couple comprised of two women, and the first time a gay family has started with a child. (The Heckings, a gay couple from Cats and Dogs with a pup of their own, were a reference to a popular online meme.)

The world of Sulani also includes a non-binary Sim for the first time. Players have access to a menu of complex gender options, where they can choose their Sim’s frame, clothing preference, and more. Maxis has included trans and non-binary Sims before in the gallery, but Lia Hauata is the first non-binary Sim to start in a city household and use that menu of options.

Island Living also offers a new host of pride cosmetics, and a gender-neutral bathroom sign. The Sims 4 has been quietly knocking it out of the park when it comes to queer and trans representation, and it’s great to see that its a continued commitment on the developer’s part. Adding small things like a gender-neutral sign might seem insignificant to some players who’ve always felt represented (or haven’t had to even consider their own representation) but all of these additions and decisions become quite meaningful in the long run.

All of the above helps make The Sims 4’s new Island Living expansion the perfect oasis of escapism for me. The news is a nightmare, I always have real-life responsibilities to worry about, and things can seem very dark. Island Living continues to flesh The Sims 4 out in the best ways, making it feel like a port in a storm. The Sims can be silly and over the top, but Island Living has succeeded at making a very believable form of escapism that is enjoyable and relaxing in all the right ways.