Steam is getting a mini overhaul in September, with a new Steam Library layout that gives users more ways to organize their games, a new Steam Events tool that helps developers communicate with their player base, and a few new experiments from the team at Steam Labs. Valve held a private media briefing ahead of PAX West where it discussed the update as well as upcoming plans for both Steamworks and Steam Labs. Updates for all three programs will launch throughout this month.

The new Steam Library will help players stay up to date with game updates and events in their library and give users improved tools to keep their games organized. The biggest part of the update is the new landing page that includes quick access to game updates and events, recent games you’ve played, games your friends are playing, and your own collections all pulled together by a new visual layout.

”The goal here is overall just to help players find the next game that they might want to play,” said Valve designer Alden Kroll. “This is a number of different ways of surfacing things that are in that player’s library that might give them a reason they may want to play that game right now.” 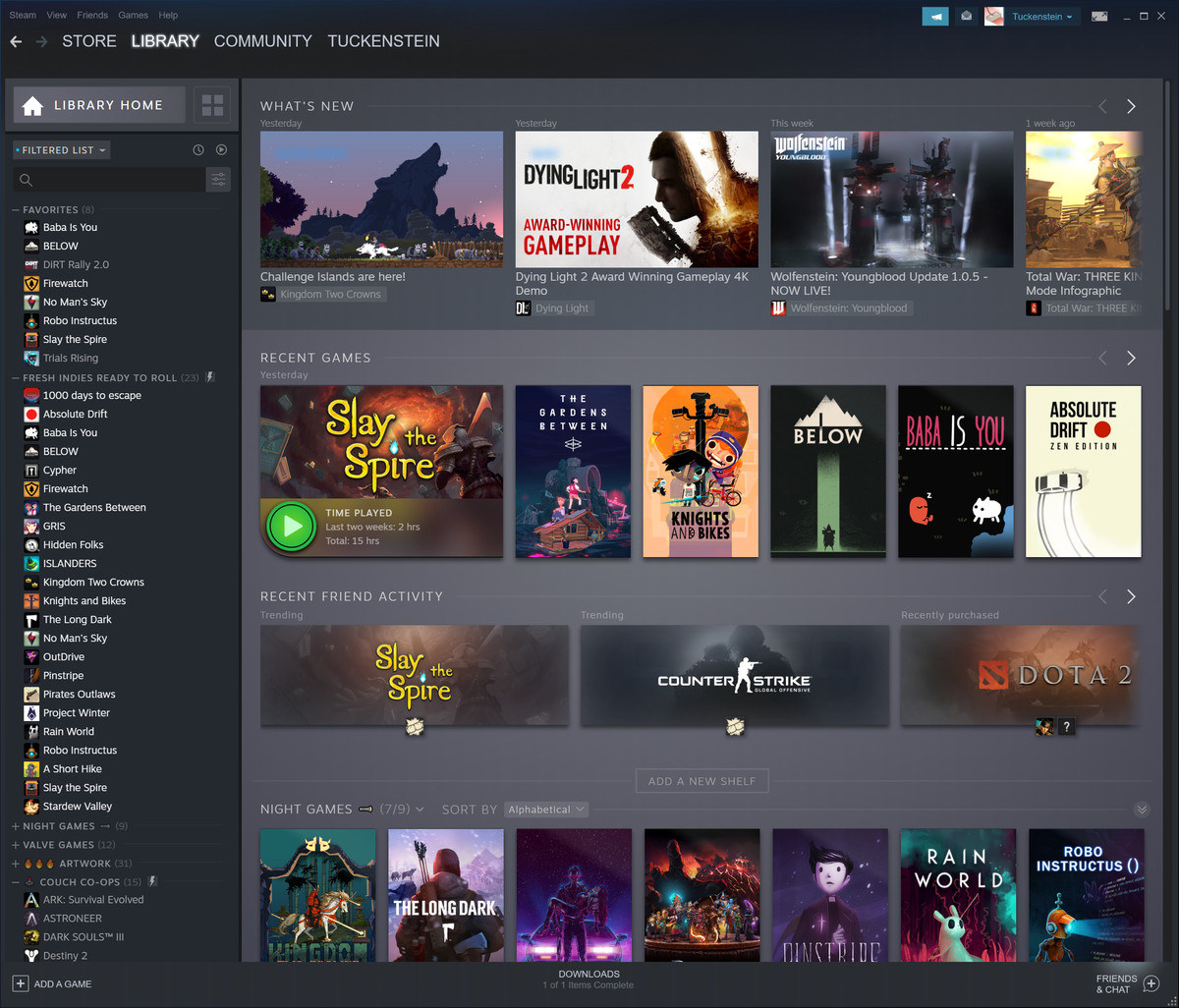 The new home page includes a ‘what’s new’ section with developer curated announcements, updates, and events happening with games in the player’s library. It can be used to promote live tournaments, free XP weekends, and other bits of new activity that might entice a player to return to a game they haven’t touched in a while.

As you scroll down past straightforward sections showcasing games you and your friends have recently played. you’ll find an expanded way to organize your library with the new collections tool, previously known as categories in the old version of the Steam Library. Collections feature more robust ways to organize and sort your library, including a new drag-and-drop function and the ability to sort your games by a wider range of tags and then instantly create a collection based off that filter. You’ll be able to organize by store tags and create collections based of things like genre, play state, hardware support, features, and other labels as well as any combination of tags.

”We also have this notion of a dynamic collection. Let’s say I’m in the mood for a certain kind of game. We’ve got the ability for you to be able to sort and filter your library to define just those kinds of games,” Kroll said. “I can now filter my entire library by the features of games or by the store tags.”

New games that meet the criteria for a collection are automatically added to them once they’re purchased. You’ll also be able to set up quick access to your preferred collections, like RPGs that can be played with controller, on the homepage making them only a click away. All current categories will be carried over to the new library as collections.

Keeping Up with Events

A new centralized events tool will let developers communicate any announcement they have including patch notes, major updates, live streams, beta tests, and any other event that affects the player. This tool will give developers one place to set up announcements that will then be distributed across multiple channels including the ‘what’s new’ section of the new home page, individual details pages, community hubs, email notifications, and elsewhere.

”We currently have announcements and events, but the event system has always been kind of buried,” Kroll said. “We’re combining those things and bringing them to the front so developers will have a new set of tools to be able to author events for any kind of communication they want to have to their players.”

Developers will now be able to stage events to show up automatically at a certain time, have events show up early to notify players ahead of time, embed videos, streams, and other items on their event pages, make use of broader localization support when using languages other than English, and take advantage of a built-in broadcast support so developers can whitelist accounts approved to stream from their page.

The idea behind this tool is to have one centralized place where developers can create an announcement and then have it spread to a number of different locations in the store. Those locations include places announcements already show up, like in the community hub, and new places like the event menu at the top of the homepage and new detail pages for each specific game. There will also be new email features so developers can use this events tool to communicate to players via email, if players opt into communications about that game.

Kroll did clarify that there would be restrictions in place to prevent developers from abusing the events tab at the top of the home page, similarly to how some have constantly changed their release date to remain on the coming soon list. “It will be personalized based on what they play a lot, what they’ve played recently, and what they played a lot in the past,” he said. “So that will determine what shows up there. If you bought a game and you’ve never played it, then an update from that game is going to be less likely to show up than a game that you played a whole bunch.”

More Experiments in the Lab

Kroll also updated us on the long-term plans for Steam Labs, which started after Valve approached indie game developer Ichiro Lambe about the six-second micro trailers he was making for Twitter. “Steam Labs is designed to be a place where we can experiment with new features without having to build them into a full, scalable product,” he said. “And that gives us an opportunity to gather feedback from developers and from customers that help us influence which direction we take those features.”

The Steam Lab program launched at the beginning of July and has included experiments like the interactive recommender that helps players customize recommendations that Steam gives them and a longer video program that highlights different types of games coming to the store each month.

Kroll highlighted three new experiments that are part of Steam’s long-term plan to help promote game discoverability. Those three included a new iteration of micro trailers that will generate the short trailers for all games on Steam (which will also replace standard images during a search), more filters, features, and infinite scrolling for the search page, and a partnership with Lars Doucet to bring a new way to deep dive into a catalog.

Doucet is another indie developer who created the Steam Diving Bell, a web application used to discover interesting games on Steam. Unlike the interactive recommender, the Steam Diving Bell doesn’t use any of the games you’ve previously played to help you find something new. It uses “dumb algorithms” to create a Wikipedia binge like deep dive. This new experiment builds off Doucet’s work. 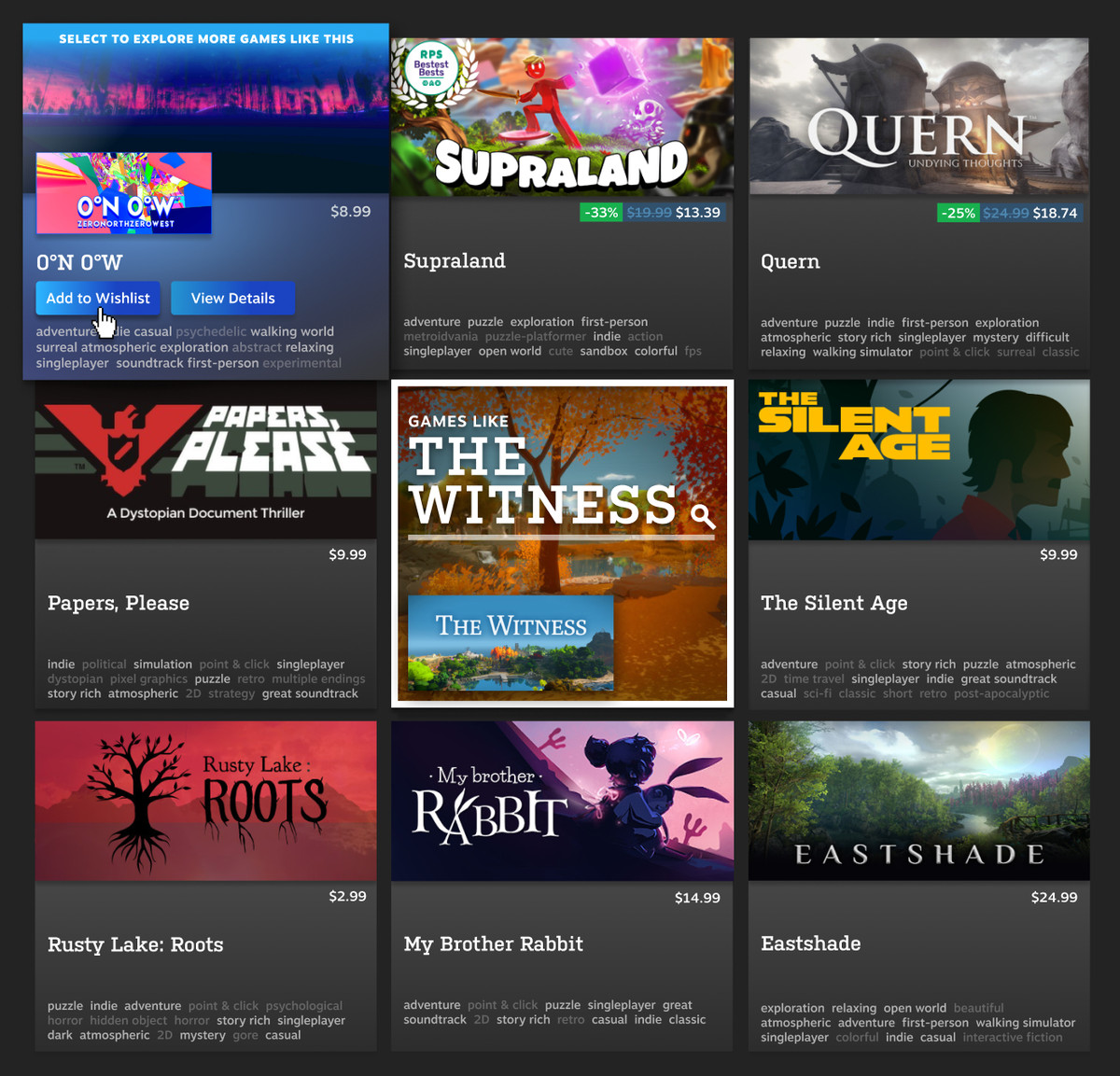 ”We’re going to keep adding new experiments to Steam Labs and some of them will also graduate and become full on steam features with the help in the feedback from the community,” Kroll said. “We’re also working with people in the community that are doing interesting explorations and experiments on their own that we think are worth bringing in and implementing as part of the Steam Labs itself. “