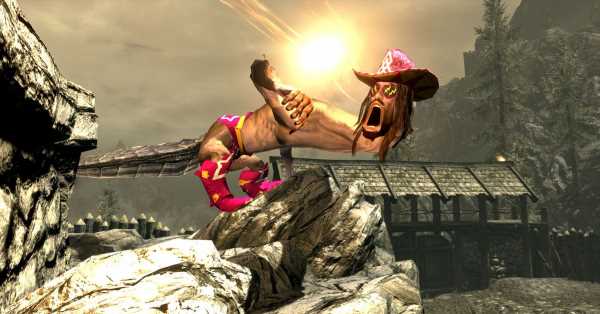 Nexus Mods is an A-list name among PC gamers, serving a McDonald’s-like 4.5 billion downloads of user-created content, changes, and improvements. The site is vital to a vibrant PC gaming culture whose players take pride in understanding how games are developed, and use that knowledge to tailor global bestselling franchises like The Witcher and The Elder Scrolls to their simplest taste. From the silly to the sublime, Nexus Mods has changed games for almost 20 years.

So it would seem to take a lot for that kind of a community resource to get in trouble with the public it serves. But Nexus Mods has. On Thursday, the site’s staff (of 18) announced that any mod uploaded to its catalog by anyone is going to be archived there and available for distribution, permanently. Nexus Mods’ sweeping and unlimited claim to its users’ work has given many of them pause. And it’s brought a lot of pushback, as you’d expect of a PC gaming community that often reads the fine print.

We’ll try to explain what Nexus Mods is doing, why it’s made those decisions, why its fans and users are troubled by it, and where things will go from here.

What is Nexus Mods doing?

After a 30-day grace period that began on July 1, Nexus Mods will permanently store any mod uploaded to the site. In this grace period, any user may write the site’s administrators to ask that their work be removed. That request is an all-or-nothing proposition: Either a user asks that all of their content be removed, or none of it is removed. After this 30-day grace period, no user may remove or demand their mod’s removal from the site. From Aug. 1 on, all mods will be archived and accessible through the site’s API, even if they are hidden from public view or search by their creator.

Why is Nexus Mods doing this?

Since 2019, the site’s managers have been developing a feature they call Collections, to be served by a proprietary content delivery system called Vortex. Collections are basically the means of creating and sharing a list of mods by different users that work together and, importantly, are loaded into the base game in the proper order.

Mod users, as well as mod makers, know that proper loading order is a critical step. Two perfectly useful mods in The Elder Scrolls 5: Skyrim can still cancel each other out or break other parts of the game if they touch the same assets or game systems, and one should have a priority that the other circumvents.

Nexus Mods intends for its Collections feature to be a loading order of mods whose working order a curator vouches for and has tested. This curator has usually done the laborious work of putting together the mod collection, loaded, played, reloaded, and re-played the game with them, repeatedly, to make sure there are no conflicts in the loading order.

With Collections, Nexus Mods intends for its users — free and premium — to be able to download and install a batch of mods in a kind of one-stop-shopping experience that still directs proper credit to each mod’s maker. But for Nexus Mods to make that guarantee of seamless, one-click operability, it has to be sure that all the components of a Collection are available. A mod maker who pulls back a creation that is part of a larger Collection might warp or break that Collection altogether.

Nexus Mods reasons that increasing the convenience (and operability) of batch-downloaded mods will increase the size of their audience and, therefore, increase the attention, credit, and compensation that mod makers receive.

Who is making money?

Nexus Mods, in 2018, implemented a compensation program that rewards mod makers based on the number of unique downloads of their work. This bonus pool is supplemented by donations from users and members, much in the same way a Twitch viewer might donate to a streamer whose work they value. Per Nexus Mods, this pool has since distributed more than $750,000, 95.9% of that funded by Nexus Mods and 4.1% from the community.

As for Nexus Mods, it sells premium memberships; users buy them to support the modding community and gain faster downloads. Nexus Mods’ managers say that money goes toward the site’s administration and upkeep, which covers “server costs, 18 employees, a content delivery network (CDN) spanning across the globe, giving back to mod authors via the Donation Points system, insurance, an office in the heart of Exeter [U.K.] and so on.”

Nexus Mods says that its plans for Collections are not to make them a premium-only feature. But, like standard downloads, “It will be more convenient for premium users, and less convenient for free users.” Premium users will have the one-click convenience of queueing and downloading an entire collection of mods; free users will have to click on the download page for each mod in a Collection, and download them manually. As a comparison, downloading a list of 50 mods for Valheim took the mod staff 11 minutes as a free user; with a premium account, it took 3 minutes.

Above: Shirley Curry, the “Gamer Grandma” loved by Skyrim fans, was put into the game as an NPC companion thanks to a mod on Nexus Mods.

Is anyone making money on Collections?

In a follow-up post on Monday, Nexus Mods’ community manager BigBizkit emphasized that Collections will not be included in the site’s Donation Points rewards pool for authors. That is, no one who curates a list is going to be monetarily rewarded simply for putting together that set of mods in a working order.

Nexus Mods says that its API serving Collections will still individually credit mod makers for each download of their work. The new Collections feature, they say, is also preferable to the existing practice of zipping up several mods together and distributing that — a practice that does not credit individual mod makers.

Of Nexus Mods’ membership of 27.5 million, only 128,000 are “members with files,” meaning folks who have created something and uploaded it for others to enjoy.

Why would a modder want to remove their content?

There are all kinds of hypothetical reasons one could develop here, but none of those scenarios are what really seems to bother people. This controversy is about control of your work, work that has your name on it. Being told that what you’ve created, for free, will remain on a website, forever, is fundamentally a lack of control over your own work.

Some on Nexus Mods’ side argue that YouTubers upload videos that are included in playlists that others create, but that ignores the fact YouTubers can delete their creations whenever they please.

Nexus Mods itself acknowledges that its plans for Collections present control-of-work issues that many top modders are uncomfortable with. “They’d like to have the ability to prevent collection curators from putting their mods into their list,” Nexus Mods’ staff said on Thursday.

“We believe that much like you couldn’t reasonably ask for someone not to put your mod in a traditional mod list they curated […] the same request does not make sense for collections, either,” Nexus Mods said. “Collections are […] reference lists for Vortex to know what files to download for you. When you host your mods on Nexus Mods you are making them accessible to users regardless of what way they choose to download them.”

That rationale doesn’t fly with some members. “Nexus should have stayed what it was — a damn good place for sharing new concepts/ideas, art in different forms — and of course, mods,” member maaaaaaaap wrote on Saturday, “where the creators themselves decided what happens to their work.”