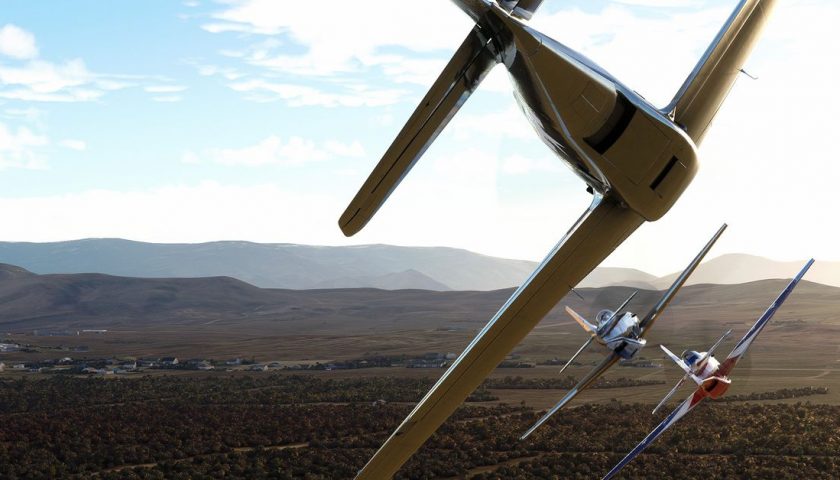 Microsoft Flight Simulator will receive an eight-player racing mode this fall. Based on the Stihl National Championship Air Races, the new mode will allow virtual pilots to take control of World War II-era fighters capable of speeds of up to 500 miles per hour. Microsoft and developer Asobo Studio announced the new mode at the Gamescom 2021 Xbox stream on Tuesday.

The event that would become the Stihl National Championship began in 1964, and has been held annually almost every year since. Microsoft Flight Simulator will be recreating its Unlimited series, where pilots fly legendary planes like the North American P-51 Mustang and the Hawker Sea Fury race along an eight-mile track. The perimeter is marked by brightly colored telephone poles, and aircraft are often flying wingtip to wingtip, at full speed, just a few hundred feet above the ground.

Neumann said that the new race mode required Asobo Studio to completely refactor how multiplayer works in the game. The stand-alone game mode is capable of more precisely calculating and sharing a player’s position relative to each other. It’s an improvement that will pay dividends for players as well as developers.

“If you and six friends want to go try some Blue Angel maneuvers or something like this, you can do this now simply because we have updated the multiplayer code structure,” Neumann said. “It’s a big step for us. And it’s not in the platform, so that means third-party developers can make their own air races, they can come up with other stuff that was previously not possible.”

The air racing module will also include a newly revised map of the area around Reno, Nevada.

“To put it together, as we say, we ‘flew’ Reno,” Neumann said, “which means we sent a plane over Reno. We took fresh photographs. We have our own height fields. It’s as clean, Reno, as it was three weeks ago; as clean as you can get.”

Neumann said that Microsoft Flight Simulator is contractually bound by its agreements with manufacturers like Airbus, Boeing, and Textron not to show their planes being damaged. The same will be true in the air racing module. When players collide with each other or with the ground during a race, they’ll simply vanish and the race will continue without them.

Currently, developers are still determining how to keep these races fair for online players.

While October is the current target, the new mode could potentially slip into November.

“November is when we launch Top Gun: Maverick,” Neumann said, referring to the highly anticipated “one-of-a-kind expansion” set to debut alongside the motion picture starring Tom Cruise. “I’m keeping my fingers crossed that the movie comes out when it is supposed to come out, but with COVID you never know.”