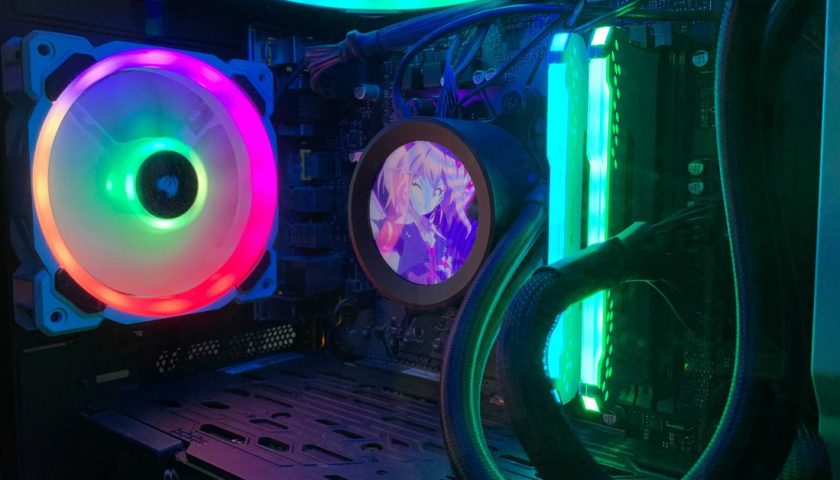 All anime characters are not made equal. If a character’s sense of style or cool demeanor hit a fan just right, they might celebrate their love through purchases like figurines or plushies. More recently, gamers have found a more novel way to show off their beloved picks: by trapping anime characters in PC cases.

Rigs showing off people’s favorite characters via tiny LCD screens visible through a PC case with clear side panels often go viral on social media, because it’s a spectacle. While small, these LCDs often show a looped animation of a character while other parts of the PC pulse with RBG lights. Usually, the moments depicted here have anime characters looking powerful or sweet, depending on the tone of the franchise. One popular design, for example, sees fans capturing Kakashi, a ninja and beloved teacher from Naruto, winding up for a powerful attack.

While a number of companies produce PC hardware with this functionality, clips posted on social media often feature components sold by a business called NZXT. NZXT makes what it calls an “AIO liquid cooler with LCD display,” a high-end component that helps keep a computer at an optimal temperature. The accompanying screens are meant to help the user gauge their heat levels, but since you can customize these LCDs to display anything you’d like, fans like to get creative. You can, for instance, show off any gif or image on the LCD — so it wasn’t long before people used the feature to display favorite anime characters.

With prices ranging from $229.99 to $279.99, the AIO liquid coolers with LCDs aren’t cheap. But rather than inducing sticker shock, the hardware has “been amongst the top-selling CPU coolers on the market,” NZXT CEO Johnny Hou told Polygon over email. Hou added that, while initially people seemed skeptical about the tiny screen and its usefulness, seeing it in action on social media helped show people the appeal and depth of personalization possible.

People have been showing off the coolers on social media since the parts were released in fall 2020, though video platform TikTok has pushed the LCD screens in front of millions of viewers. Trends involving the coolers often have anime girls swaying their hips in time to a song called 2 Phút Hơn. That phenomenon then grew to incorporate a wider variety of franchises ranging from anime like Darling in the Franxx to lesser known picks, like characters from a rhythm game called Muse Dash.

For some, like Twitch streamer Emmesux, the LCD screen was simply another way to customize a PC set-up. She told Polygon via Instagram chat that she “bought the Kraken for visual purposes only.” Her character of choice? Killua Zodyck from the anime Hunter x Hunter.

Like a rotating wallpaper, Emmesux will change Killua’s depiction on the LCD screen from time to time, to keep her setup fresh. Sometimes, she’ll pick darker moments, like when Killua appears intense and powerful during the anime. But other times, Killua is displayed in a softer light, like when he’s smiling and giggling with friends. Based on popular picks on TikTok, characters trapped in PC cases like this usually exhibit a similar range of tones and emotions.

The cool thing about this PC hardware sensation is that it goes beyond the aesthetics of “hardcore” RGB gamers, and has also been embraced by those who like cleaner, pastel ambiances too. Everyone, regardless of fandom or gender, has a favorite character they love to celebrate, and these LCD screens provide a new avenue for exactly that. As it turns out, we all like to simp for a well-designed character.