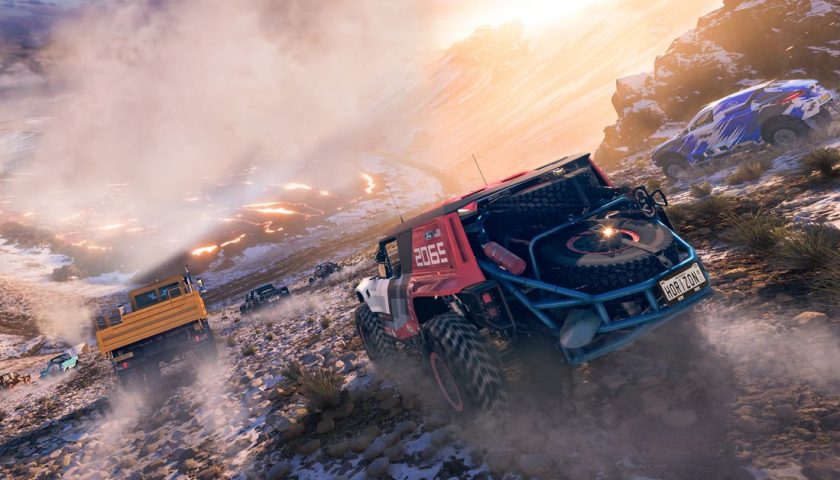 La Gran Caldera, Forza Horizon 5’s stratovolcano, takes both the player and the game’s decadelong promise — if you can see it, you can drive to it — to new heights. And it’s not just the postcard views from the summit; the journey up either side gives a good taste of what Playground Games’ latest festival has under the hood.

From the west, you ascend La Gran Caldera along a dirt road in broad, sliding turns; from the east, you get a paved route with tighter switchbacks. It’s about 15 minutes, round trip — up one side and down the other — from the central hub world. All of that time was a seamless transition.

From rolling farmlands to the woodsy mountainside, overcast skies to gorgeous sunshine, green grass at the base to sulfurous yellow dirt at the summit, nothing ever suggested that, hard stop, I was leaving one area for another. Somewhat like officiating in a football match, some of Forza Horizon 5’s best features, for me, were the ones I noticed the least. I didn’t remark on how cohesive this game’s expansive and diverse world really was until I was jotting down notes after my time in a hands-on preview last week.

“One of the bigger things is, because we have a much bigger world, is the longer draw distance,” Don Arceta, the game’s art director, observed in a call with previewers last week. “Seeing a lot of our details way off into the distance, farther into the distance than you ever could see before, we’ve [had to] improve a lot of our rendering across the board, our shadows, our lighting.”

The fact that Forza Horizon 5 will load from the Xbox Series X’s solid-state drive also gave the developers a lot more freedom, creative director Mike Brown said. The game’s traditional race-to-the-festival opening now comprises four vehicles sampling four different courses, and the set-piece that immediately follows it starts at race central, zips through farmlands, then a hillside village, up and down the mountain it’s on, and terminates in a jungle. You can’t lose either race, which means that both come off as statements of intent from the Playground staff.

(Players on Xbox One, of course, won’t see as much fidelity in the visuals, and will face more loading times in situations where one would expect to see them, Brown said.)

But Forza Horizon 5 didn’t strike me as just a collection of showy images and technical conveniences, either. The vehicle handling feels like a seamless transition in its own way from stricter simulation-quality racing games. I recommend the game’s simulation steering option (as opposed to the standard, light assist, or heavy assist settings), with traction control on and stability control turned off, even for more casual drivers.

For one thing, it’s the only way to feel the active aerodynamics of the Mercedes-AMG One in the big set-piece that begins the festival. For another, normal arcade steering makes some simple drifts harder to start and harder to maintain. Its emphasis on smaller and quicker stick movements also means that little mistakes can spiral into fishtailing overcorrections rather quickly. Simulation steering in Forza Horizon 5 delivered faster times against tougher AI for me in the half-dozen events I entered, and was a must for the improvised rallying I did, both up the volcano and through the map’s muggy wetlands.

And rallying up and down the volcano, I saw how committed Playground Games is to its see-it/drive-to-it values. Both ascents meet in a knot of side roads inside the bowl of the volcano, but you can still charge straight up the rest of a nearly vertical rim — a little too easily, perhaps, in a concession to the casual curiosity of a big audience. But hey, it’s there, and you can climb it. The haul down the western dirt road delivered a sweeping, almost 180-degree drifting switchback, a perfect blind launch into big air and a safe landing, and plenty of other serotonin flushes.

“Without going full arcade and making it feel unrealistic, we have a few little tweaks to the handling, which makes them handle, maybe not exactly as they would in real life, but they kind of shave off the edges in a way that respond in a way a gamer would rather they respond,” Brown said. Forza Horizon 5 is again supplemented with a complex tuning system for drivers who know what they’re doing and want to bend a car’s cornering or shock absorbers more to their tendencies.

“The other things that we’ve done in this title, which are almost a little counterintuitive, is that we’ve made some huge investments into the physical performance of our suspension and braking,” Brown said. “In both cases, we’ve strived to make them behave more authentically. So the brakes now, rather than being kind of on/off, there’s a much more gradual grip of the discs on the brake. So you can really adjust as you’re squeezing that trigger. It’s a much more gradual application of braking.”

Driving with an Xbox Elite Series 2 controller (on standard settings), I can attest to the better feel in the improved braking; moreover, I can attest to the simulation steering setting again being the best way to draw out this feature. The binary on/off braking Brown described from past Horizons leads to a lot of feathering, flick-steering, and other sharp, minute movements common to arcade racing, in my experience. The car becomes hyper-responsive as a result. Forza Horizon 5’s more lifelike steering, braking, and suspension let me keep my hands on the wheel and stay more involved in a turn, especially the hairpins and square rights that demand extra technique at speed.

“If there was a dial that was going between sim and arcade, we’ve actually pushed it more toward sim,” Brown said, “but we’ve actually made it more accessible and easier to drive as a result.”

As ever, there is a ton of competitive driving in Forza Horizon 5 — road races, rallies, dirt circuits, and the like. The challenging AI again spikes rather noticeably from average to above average, though, and the result is that a lot of overtaking at higher difficulties inevitably involves contact. I always found this at odds with the theme of a car-culture festival, where people ostensibly gather to lavish their rides with attention, not trash them. There’s always a generous rewind buffer to undo mistakes in single-player racing. If you’re a clean-racing neurotic like me, just turn damage off altogether.

The interior of the Mercedes-AMG One hypercar. You’ll need to turn simulation steering on if you’re going to feel the difference in handling that this car offers.
Image: Playground Games/Xbox Game Studios

Wrapping all of this is a very welcoming presentation of Mexico, both geographically and culturally. Playground Games’ world designers have done a strong job in delivering interpreted, fictionalized locations that still have their own sense of place. Fans of the very first Forza Horizon (I am one) will really feel called home by this landscape, a close sibling of that game’s Colorado, but much better looking. Seasonal weather (introduced in 2018’s Forza Horizon 4) will again change weekly, but precipitation can happen (or not happen) anywhere, and weather is more of a landscape supplement rather than something to distinguish one area from the next.

Again, hauling up the side of La Gran Caldera, little jet streams of dust blowing off my hood let me know I was in a system that would later kick up a dust storm. At the top, patches of snow had sublimated in the bright sunlight, revealing a sulfurous yellow dirt beneath. It rained ever so slightly, just a few flecks from a cloudburst, and then it was back to bright skies. Like the vehicles’ braking, the weather in Forza Horizon 5 is also more subtle and gradual than on-or-off.

Forza Horizon 5 will launch Nov. 9 for Windows PC (via Steam and the Microsoft Store), Xbox Series X, and Xbox One. It also launches the same day on Xbox Game Pass, for both console and PC subscribers.