Shakespeare’s Hamlet is a tale of misery, murder, and madness. The classic play sets up a domino chain of events, with each development thrusting the Danish royal castle further into despair and darkness until everyone is dead.

Elsinore, a point-and-click adventure from Golden Glitch studios, revisits Hamlet with a major twist. In this dialogue-based game, I take the role of Ophelia, and I begin living through the narrative of Hamlet, beginning directly after Act 1. I’m not much of a Shakespeare person, so I entered the game a little skeptical — but Golden Glitch have won me over where the Bard of Avon failed.

The first time I play through the sequence of events, I mostly find my feet, learning about the Danish court and the background characters of Hamlet. Just when I feel like I properly grasp the situation, Ophelia is cornered and killed, her murder concealed as an accidental drowning.

I sit for a moment and process this, and then… Ophelia wakes up in her bed once more, disoriented and alarmed.

This sequence of events — waking up to a raving, panicked Hamlet, investigating the castle, and a desperate attempt to save my own life — is the core gameplay loop of Elsinore. The castle Elsinore itself is small, and the cast is made up of a few major players and a small supporting cast.

As Ophelia, I only have a couple of days to stop the events of Hamlet from unfolding. Those days pass quickly, and there’s no possible way that I can uncover everything in just a few short loops. Instead, Elsinore presents me with a long list of small goals leading up to the major objective of saving the entire Danish Court. What of Ophelia’s mother, and the secrets she held? Can I convince Gertrude to help me investigate Claudius? Why did Hamlet kill my father, and how can I prevent that?

These large, abstract goals, combined with the repetition of a time loop, could easily veer into the boring. However, there are lots of much smaller goals that build up to these big moments, and so I will spend one loop focusing on learning about my mother, then the next loop planning a break-in, and so on. Each playthrough is different, a single approach and attempt at untwisting a Gordian knot. 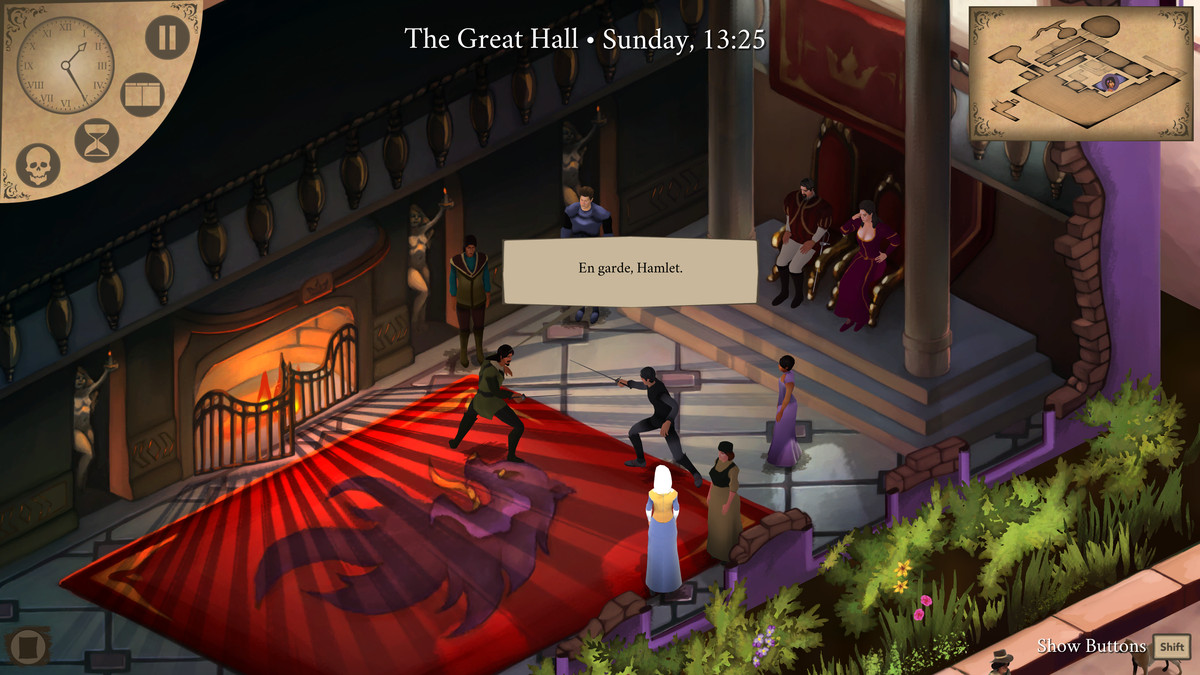 A game like Elsinore, which largely centers around conversations and mystery, lives and dies based off the quality of its writing. The bulk of Elsinore’s dialogue does not come from Hamlet; it’s original dialogue (not iambic pentameter, sorry Shakespeare nerds) created to tell the story from Ophelia’s point of view. The writing is perhaps slightly anachronistic with how modern it is, but it’s also clear and compelling.

Golden Glitch were able to create a dozen solid, likable characters with their own motives and histories that shine through as you talk to them. Claudius is a menacing presence over the story, a threat to both Hamlet and Ophelia. Gertrude, on the other hand, is trying her best to desperately influence her new husband and son. Golden Glitch manage to make Gertrude’s comparatively domestic concerns feel as weighty as the big picture court drama. I actually liked Gertrude and wanted to help her out.

Even Hamlet, who I know for a fact ends up going on a murder spree in the play’s canon, tugs at my heartstrings. He’s equal parts angry and vulnerable, and when he admits that he loves Ophelia but still wants to respect her wishes for distance, I can actually see the appeal in picking the conversation option where we discuss resparking our romance.

Gertrude and Ophelia get far more screen time than they do in the play, much to their benefit, and some more female characters have been added to the cast. Lady-in-waiting Brit, castle cook Irma, and a genderswapped Rosencrantz and Guildenstern round out the cast.

It’s intriguing to see gender represented and explored in a Shakespearean political drama, and it helps add to the layers Ophelia must navigate. Race is also touched on in Elsinore; Ophelia and her brother Laertes have a white father in Polonius, but their mother was a woman of color. Elise, Ophelia and Laertes’ mother, was discriminated against, and that’s trickled down to Ophelia as well. 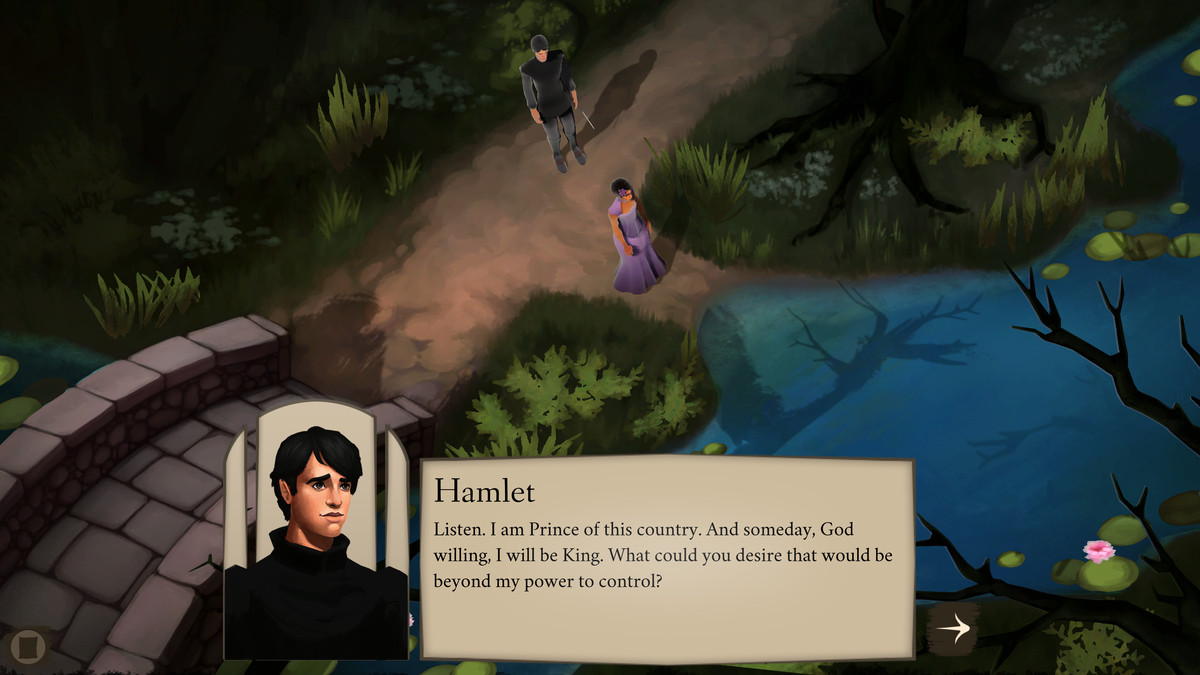 Ophelia is a woman of color, with an on-and-off relationship with the Prince of Denmark. That adds complexity to her world, and it reinforces that Ophelia has to be careful as she investigates her own murder. She can’t kick down the door or make threats; she has to carefully ask the right questions, track everyone’s schedules, and keep secrets from her allies, in case they turn out to be enemies.

The vast bulk of playing in Elsinore comes from conversations. I have conversations with characters, and new options unlock over the course of successive time loops. Sometimes I want to find as much information from them as possible; other times, I keep secrets. My actions inspire other characters to meet and plot amongst themselves. I check my timeline tab to see who’s meeting, where, and when, and I can sneak up on them. My journal tracks my progress, and I end up scribbling my own notes on a pad of paper on my desk.

There’s a contrast in Elsinore between the castle itself, which is small, easy to navigate, and depicted in serene painterly colors, and Ophelia’s time loop task. While the environment is simple, the people who inhabit it and their goals are complex. Elsinore is a dense little game, where I end up exploring the same environments with new scenarios and experimenting with different conversations and approaches … that often end up pretty badly for Ophelia. 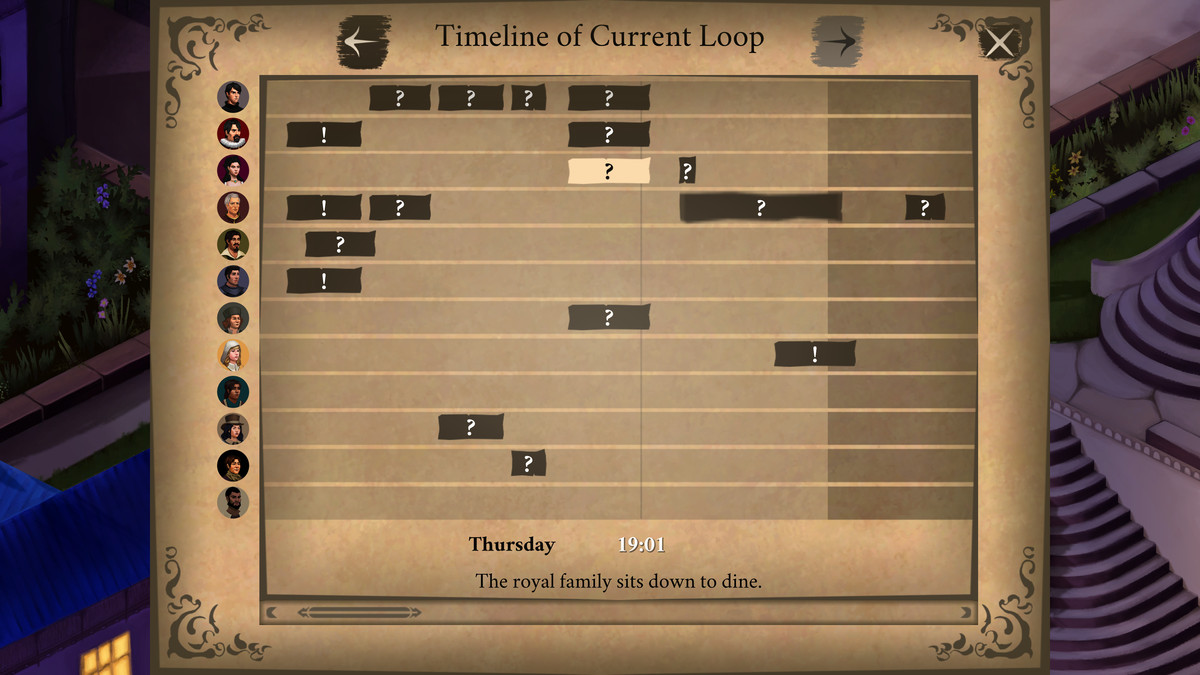 With one time loop, I convince Hamlet to ally with me, but he won’t take me to meet the ghost of his father unless I can check Gertrude’s chambers and prove she wasn’t complicit in her husband’s murder. In another time loop, I talk to as many people as possible about the supernatural things I’ve been experiencing. They interrupt me in the middle of my investigations to take me away to an institution; they’re convinced I’ve lost my mind.

Characters have emotional states and beliefs that I must track. What do they believe? Can I convince them of the conspiracy at play? Even small goals, like soothing over a conflict between Hamlet and someone else in the court, can be the key that unlocks another avenue to solve a larger mystery.

Elsinore brings another game to mind — Long Live the Queen, a visual novel about training for the throne as a young princess in a fantasy land. Both games are about diplomacy, dangerous social webs, and continual failure. But, Elsinore’s time loop and journal mechanics means that I always feel like I’m making some kind of progress. Ultimately, I’m in love with this take on the point and click adventure, where there isn’t much variety, but there’s a deep well of layers to explore.

The end result is effective; Elsinore is like a beautiful little onion, and peeling away the layers over the course of a playthrough is sheer pleasure.

Elsinore is now available on Mac, Linux and Windows PC via Steam. The game was reviewed using a PC download code provided by Golden Glitch. You can find additional information about Polygon’s ethics policy here.