Nintendo released a Pokémon Mystery Dungeon Rescue Team DX demo for the Switch yesterday, and the remake opens with a personality quiz. Depending on your answers, the game will assign you a specific playable monster who is supposed to represent the real you.

This is already the most important test I’ve ever taken.

Usually, when I pick a Pokémon starter, I go for the fire-types. Surprise, I’m an Aries. But in this case, I didn’t want to game Mystery Dungeon into giving me a specific outcome just because I believed I should be a specific creature. I wanted to answer truthfully, and see what the game would determine as my pocket monster essence. This, I reasoned, would be a true diagnosis of my character. And maybe my worth as a human being.

Some of the questions you get are pretty standard fare for this sort of thing, meant to gauge what sort of person you are based on your decision-making skills. I was asked, for example, if I liked to fight. (Yes, but I’m not proud of it.) Then there were bizarre questions like this one:

As you can see, the whole thing is pure science, and thus unquestionable.

Once the quiz is over, the game gives you feedback, some of which comes across as a hilarious neg. The game told me I was happy-go-lucky and cheerful, but that sometimes I get “carried away and say things that get [me] in trouble.” True, true. And then the game gave me some advice:

Honestly, fair, but also, can I LIVE, Pokémon?

The game followed this up with its final verdict: I’m a Squirtle, the classic water-type starter from the original games. I wasn’t expecting this answer, as I’ve never felt particularly aligned with the free-flowing element.

But I’m into it! When I think Squirtle, I think of the mega-cool Squirtle Squad from the anime. Squirtles surf, man. They’re chill. I love Squirtle! 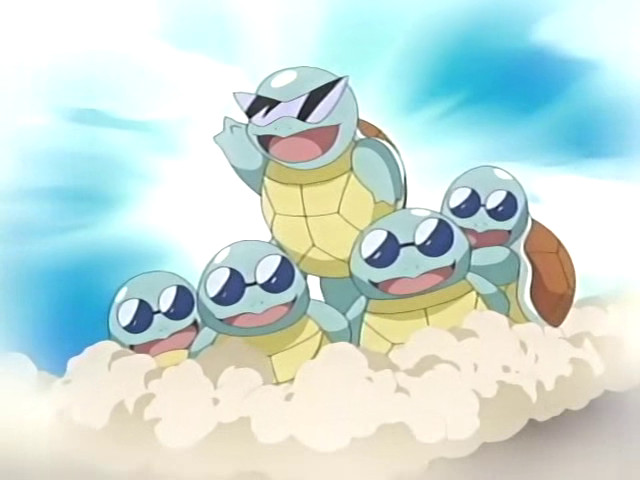 Bulbapedia via The Pokemon anime

Despite thinking of myself as a fiery person most of my life, somehow this outcome makes me feel seen. I’m getting older, and learning how to be kind to myself. The last few years have been an ongoing process in learning how to pick my battles and knowing when to let go. Maybe water is more appropriate for that? Or maybe I’m putting way too much stock into a quiz about tiny fighting monsters and my relationship with them? But it’s probably the former.

I’m also having a lot of fun seeing what outcomes my friends and colleagues are getting. Nearly everyone is walking out of it with monsters they didn’t expect — or better yet, with extremely funny screenshots of Mystery Dungeon being mean to them.

The good news? If you don’t like it, you can simply pick a different main character. Plus, the game also gives you a second computer-controlled buddy who joins your adventure as well. I’ve spent an hour with the demo, and it’s a lot of fun so far. Go try it out if you need something new to play this weekend, especially given that your progress can be transferred over to the full game later this year.

But really, I want to know: who did you get, and how do you feel about it?