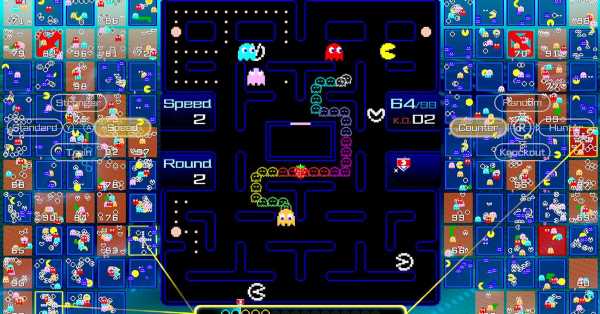 Pac-Man 99 looks like classic Pac-Man on its surface. Players chomp pellets, avoid ghosts, and turn the tables on Blinky, Pinky, Inky, and Clyde by eating Power Pellets to rack up high scores. But in true battle royale fashion, every Pac-Man is competing against other Pac-Men; you don’t need to just survive, you need to attack your enemies.

In Pac-Man 99, when players eat a ghost, they’ll send a Jammer Pac-Man to an opponent. Any player who touches a Jammer will be slowed down. Players can also swallow trains of ghosts by gobbling up Sleeping Ghosts, which form a snake-like buffet. Consume a Power Pellet, feast on a ghost train, and you’ll overwhelm your enemies with a barrage of Jammer Pac-Men.

Pac-Man 99 also includes power-ups that boost Pac-Man’s speed or multiply the number of Jammers sent to enemies. The game’s trailer, embedded above, makes everything clear.