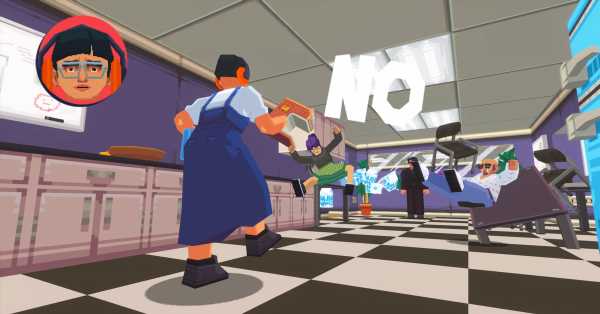 Say No! More, by developer Studio Fizbin, is a training ground for learning to say no.

Playing as a newly hired intern at a shitty corporation, I’m relegated to a desk behind a vending machine, where I learn about the devastating effects of “yes.” I then learn about the power of “no” from a ’90s-styled self-help cassette tape slotted away in my office. And then I become very powerful — able to knock things, people, and buildings over with my forceful no.

It’s a goofy game with a goofy premise, but Say No! More still has a wildly fun anti-capitalist message. Studio Fizbin is saying something about work and culture through this over-the-top mechanic. There is sincerity in the message about boundaries and workers’ rights expressed through these satirical scenarios, which range from saying no to making someone’s coffee to physically blasting away a bad boss with a thunderous no.

Say No! More comes at a time when video game industry workers are starting to say no more as well. More people are becoming interested in workers rights’ and keeping employees healthy, and in ensuring that workers feel like they can actually say no. The industry is starting to feel the power of no, such as mobile game writers on Lovestruck saying no to their bosses, and going on strike for 21 days to win fair pay for the staff.

A game that forces its players to practice saying no — even one this wacky — feels good. It’s empowering to blast away shitty people in Say No! More. Saying no in real life is often hard, but Say No! More makes it easy to give it a shot, at least virtually.

This game won’t transform my life, or unlock a hidden power inside me that gives me the confidence to scream “NO!” in public, but it’s an entertaining reminder that there is an alternative to the constant encroachment of capitalism. You can say no! Whenever you want!

(For the record, after playing the game last night, I did give a big ol’ no to a solicitor trying to sell something at my door. But then I felt bad about it.)

The problem is that the gag eventually gets old; I lost interest about 45 minutes into the game. Though the slapstick-style humor in the act of saying no is genuinely amusing, Say No! More became dull once it was clear that I literally couldn’t do anything but say no. I had imagined that Say No! More’s world would be a bit more like that of Untitled Goose Game, except with a no instead of a honk. But it’s not: There are no puzzles to solve, just the subtle differences in the many ways to say no.

There are some situations where friendly people approach me with something nice or charming to say, and the only option is to not say no, do nothing, and wait for the encounter to end. The game is also basically on rails, so I’m guided through the scenarios and can’t choose where and when I want to go someplace. There’s some charm in teaching other characters to say no, and to follow me on this journey. But the game could have ended much, much earlier, and the power and gag of only saying no might have hit harder.

Saying no is hard. But doing so is good — we often need to say no to preserve our boundaries. Yet I was very tired of saying no by the end of Say No! More. I just wanted a little bit of yes, as a treat.