Retro Studios gave former Nintendo of America president Reggie Fils-Amie a signed drawing of him posing with various characters from Retro games, but a small mechanical hand in the picture is throwing a lot of fans for a loop.

The picture, along with a working Virtual Boy, a notebook for taking names, a plastic ass to kick and more, were given to Fils-Amie during a retirement event, and the Nintendo legend decided to tweet out pictures of these gifts yesterday.

The folks at GameXplain and fans on Reset Era noticed a mechanical hand in the picture, which can be seen poking out from behind a small statue of Mario in front of the picture. Theories have begun flying. 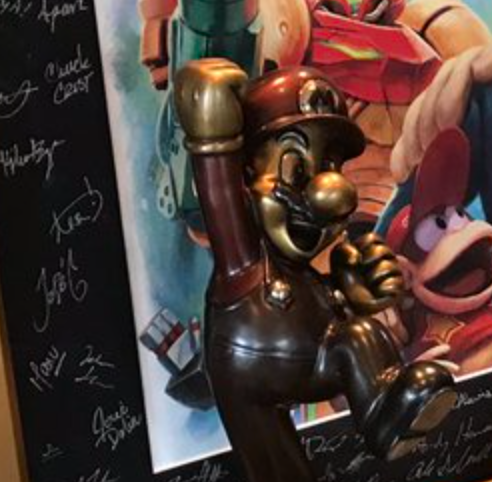 Above the hand (to the left of Mario’s arm) there appears to be what some describe as an ear with a portion of a helmet above it. This could very well just be part of Samus’ arm canon and elbow, but the color is slightly off, and it doesn’t follow the typical design of her Varia suit. Considering the Mario statue’s precise placement, some fans think Fils-Amie staged the photo as part of an elaborate tease.

Because Retro Studios has only developed Metroid Prime and Donkey Kong Country games (excluding the studio’s assistance on Mario Kart 7), some fans believe this is a character from a different Nintendo franchise, or believe it’s associated with a brand new unannounced Retro Studios IP. To add fuel to this fire, Enrique Rivera, a concept artist at Retro, retweeted Reggie’s post with a winky face, suggesting there really is a tease in the picture. According to his LinkedIn page, Rivera has been with Retro for nearly four years.

What do you think about the little mechanical hand that could? Let us know in the comments below!