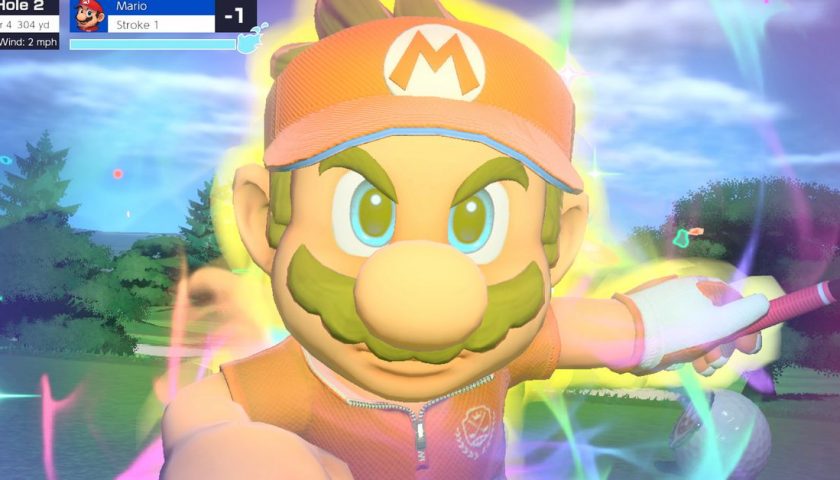 It was only an hourlong, eyes-only demonstration, but that’s fine. Mario Golf: Super Rush looks like it will be a blast to play later in June, when Camelot Software Planning’s next mashup of the Mushroom Kingdom and country club sports arrives to Nintendo Switch.

Moreover, the game’s shot-making systems look like they will deliver an intuitive, easy-to-learn experience, whether you’re teeing off for 18 holes by yourself, or measuring an approach shot after Bowser Jr. drops a smoke bomb on the putting green. A Speed Golf mode blending the sport with Mario Kart-style antics is the game’s showpiece, particularly if you’re duffing around with friends, but a fast glance at the HUD tells me Mario Golf: Super Rush does have serious-golf bonafides for those angling for a more traditional round.

Mainly, I’m charmed by the thin, vertical bar of information to the right (or left) of your character, and the way it bends to give the player an idea of how a golf ball resting on a slope will alter their shot. Aesthetically, it might be better suited for the arcade style of golf that Super Rush aims to deliver, but I have to wonder why simulation golf titles haven’t tried something like this already.

Arcade and sim golf titles, even the best ones, have ranged from giving players too much information (making shot selection routines easy to the point of boring) to too little feedback, leaving them feeling disconnected and unable to understand why the ball landed where it did. In neither case has anyone really told the player what to do about side-hill lies. Most point out the fact that, yes, the ball is at the top or the bottom of a grade of whatever degrees, but it’s guesswork from there for the user when they’re aiming the shot. I always have to remind myself to turn my golfer several degrees into the hill, to account for the fact the ball is going to curve in the opposite direction.

Mario Golf: Super Rush simply bends that noodle of information left or right, severely or slightly, to give the player an instantaneous, easy-to-understand impression of what that ball will do once it’s struck. And if it’s helpful in a round where you have unlimited time to do your thing while everyone is waiting politely, it’s even more useful when speed is of the essence and a zoot-suited Waluigi is disco-dashing to the hole way ahead of your foursome.

Again, my impressions are eyes-only — an important caveat as the best golf video games replicate that sense of feel golfers have when assessing and executing their shot. I don’t know how Mario Golf: Super Rush will perform in that department, yet. But this blink-of-an-eye, complete mental picture of your shot suggests to me that Camelot seriously thought about how their game would support playing zany golf variants, instead of simply speeding up the standard game or whipping a blue shell into it.

Most of what I saw in Mario Golf: Super Rush seems to accommodate Speed Golf’s split-second decision making, which is why that looks like this title’s signature mode. In it, players are trying to finish the hole faster than their rivals, with 30 seconds per stroke added to the actual time they spent going from tee to cup. There’s a single-player option to take on an AI foursome, but it looks like this playlist is best with human friends, especially devious ones who aren’t above coughing during your backswing.

Each of the 16 golfers on Mario Golf: Super Rush’s roster have two unique abilities that are best deployed in a multiplayer round of Speed Golf. There’s the Special Dash, a themed speed boost to get them in front of a race to the ball. And there’s the Special Shot, basically a super-buff to their distance and accuracy, with a big-time nerf to anyone else’s shot in the vicinity. Mario’s Special Shot lands with a kind of splash damage that can knock opponents’ balls off the green; Pauline’s will clear them out of her way. Luigi’s freezes the surrounding ground where it lands.

Of course, these special abilities are limited by a meter that must be filled (the Special Shot) or a character’s stamina, which must be replenished by picking up items on their way to the finish. Stamina is one of five attributes differentiating each character and giving them a particular style: Power, Stamina, Speed, Control, and Spin. They also support the Golf Adventure mode, similar to the Story Mode of Camelot’s Mario Tennis Aces three years ago, but with more role-playing game characteristics and the player’s Mii as the star.

Golf Adventure is likewise a stretched narrative in which the player learns the mystical secrets of the sport while thwarting the supernatural opponents who guard them. This manifests as golfing minigames, such as the short-approach tutorial I saw where the user learns how a lob wedge works by deflecting the charged-up attacks of an enormous black knight standing over the green. Golf Adventure, in addition to being an onboarding experience, also levels up the Mii character and readies them for play online against the rest of the roster.

For the parts of the game that aren’t pressured by Luigi skating to the green or Bowser cross-checking you into a Chain Chomp, Mario Golf: Super Rush has a hole-scanning toolkit to give players a complete sense of what they’re getting into. The scanner points out distance to the hole, changes in elevation and surface (and their effect on a shot’s distance), and more. Most golf titles give players an overhead-type view which, though useful to shot planning, can make it easy and unchallenging. The scan view looks like a winner to me, because it helps you plan out a shot with a good idea of how it will travel, without resorting to godlike omniscience.