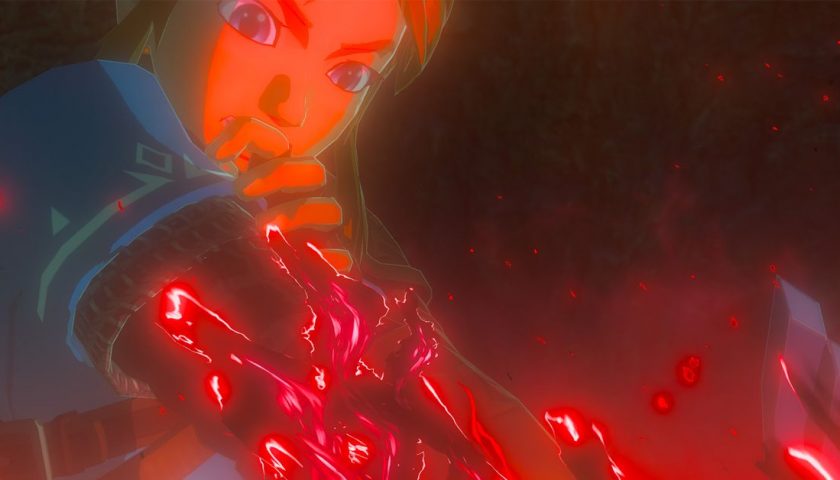 Nintendo showed off a new trailer for its The Legend of Zelda: Breath of the Wild sequel during its E3 2021 Direct. Not only did Nintendo’s new teaser show off Link’s sweet new hairdo, it also gave us the first look at some of his new powers.

After some world-building — complete with creepy red goop and a foreboding shot of Zelda falling into an abyss — we see Link diving through the sky. This is a bit different from Link’s usual jumps from high towers, as much of the gameplay we see in this trailer seems to take place on floating islands above the clouds. Link’s dive seems more akin to Skyward Sword’s skydiving sections than anything out of the original Breath of the Wild.

The shot of Link falling-with-style gives us our first real look at his new, corrupted arm. Link’s right arm appears to be infused with the red goop from the trailer’s opening section, as we get just a glimpse of it infecting him. We get a better look at his arm’s transformation later (shown above), but it looks like a cross between the Winter Soldier’s robotic arm and the Sheikah technology from Breath of the Wild.

This arm appears to be the source of Link’s new powers. As Link is climbing a hill, we see a remix of Stasis from the original game. A group of enemies sends a spiky ball Link’s way, but he quickly reaches out with his corrupted hand, freezes the ball, and then rewinds it back up the hill, taking out some Bokoblins along the way.

Link sends the spiked boulder back up the hill
Image: Nintendo EPD/Nintendo

Notably, Link doesn’t use his Sheikah Slate to stop time. In fact, we don’t see the Sheikah Slate at all in this teaser trailer. Instead, all of Link’s magic seems to come from his hand. You can see this happen again when Nintendo shows off Link’s second new power: the ability to go through solid ground.

Toward the end of the trailer, we see a puddle of water reverse into a rain drop and fly into the sky. Link then does something very similar, pointing his arms up like he’s about to dive into a pool of water. He then flies up through the air — leading with his corrupted arm — and dives through the ceiling. The camera makes a quick turn up and we see Link climb his way through the top-side of the rock.

Link’s abilities seem quite a bit more powerful in the sequel, although we’ll have to wait and see how or if the arm augments powers like Magnet, Remote Bomb, and Cryonis.

This mysterious enemy looks to have the Sheikah symbol hanging from its arms
Image: Nintendo EPD/Nintendo

Aside from his new powers, we also got a look at some new enemies and potential allies in the sequel to The Legend of Zelda: Breath of the Wild.

The creature above appears to be some kind of stone statue come to life. It has what appears to be the Sheikah symbol hanging under its two torches, so it’s possible this could be the sky’s version of a Guardian. We’re not sure if it’s an enemy or an ally, but it looks more inquisitive than threatening.

The Bokoblins and Moblins have also gotten craftier in Breath of the Wild’s sequel. The trailer shows some Bokoblins hanging out in a fort built on top of a Stone Talus — the giant, sentient rock formations from the original game. This effectively combines the two enemies, pitting Link against a walking rock of doom with a backpack filled with Bokoblins.

Breath of the Wild’s Guardian will be playable in Hyrule Warriors, which rules

The trailer also gives us a brief glimpse of what appears to be a new weapon. Link battles an enemy that’s coming out of the ceiling, but he’s using an arm-attached flamethrower to do it. While this flamethrower does attach to Link’s arm, he’s actually wielding it on his left arm — the non-corrupted side.

Nintendo is looking to release the sequel to The Legend of Zelda: Breath of the Wild sometime in 2022. We’ll likely get more details around Link’s mysterious arm later this year and before the game’s official release date.