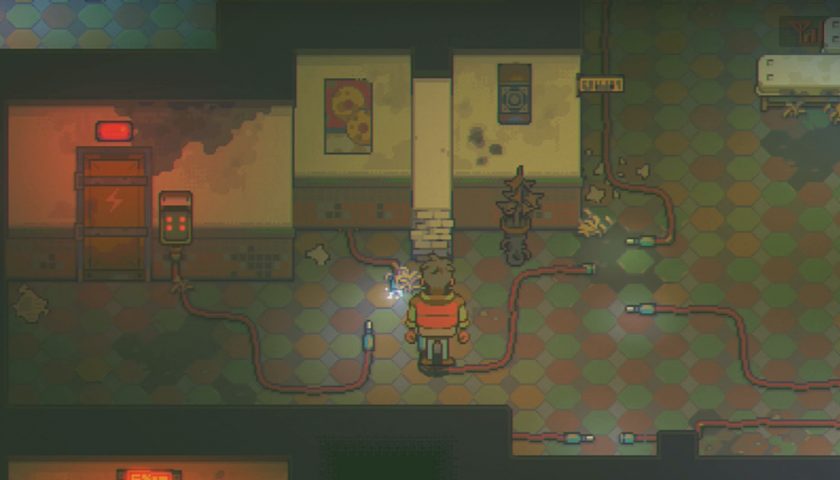 Eastward opens in the subterranean community of Potcrock Isle, where residents fear the wasteland they believe exists above them. As an older man named John and his energetic young charge, Sam, players explore a series of unique settings and work to find whether the world they know is better than the one they do not.

In this Eastward beginner’s guide, we’ll offer tips to help you through the first few hours of your grand adventure, with advice on solving puzzles, fighting bosses, navigating the labyrinthine world, and discovering various secrets along the way.

At Johnny’s Emporium, a shop near the top of the hill above your residence in Potcrock Isle, you can purchase the Treasure Radar for the low price of 50 salt (the game’s currency). Make that item the first thing you buy, and then pay attention as you explore Potcrock Isle and adjoining areas.

When you approach a treasure chest, your radar will start beeping. The closer you get, the more insistent the noise becomes. Search carefully, and remember that sometimes you can walk through seemingly solid walls to find your elusive reward on the next screen.

When you pause Eastward, you can access several tabs that let you change equipment, view your journal entries (so you know what your current objective is), and consult a map. The map is very useful and fills in automatically as you explore. Some of the maze-like environments can give you trouble at first, but the in-game map lets you see where you have already been and points to your next objective.

Before you enter especially dangerous areas, such as dungeons or boss chambers within those dungeons, you will often find a refrigerator with a television resting on it. Investigate the refrigerator to receive a cryptic message and save your progress. Eastward automatically lets you resume from certain checkpoints as you explore dungeons. If you plan to stop playing for the day, though, it’s best to save at the nearest refrigerator.

Enemies you defeat sometimes drop ingredients, such as potatoes or fruit. Collect those goodies before they disappear. Back at your house, or at other stoves you find on your adventure, mix and prepare the ingredients to produce food you can carry in your backpack.

When you discover a new dish, Eastward notes the recipe. Some dishes will just refill hearts on your life meter, but others will offer a temporary extension to your usual supply or additional protection. Try mixing ingredients to see which combinations you like best. The dishes you make take up a space in your backpack, just like treats you might buy from a store, but they are generally much more effective.

Early in your adventure, you find you have broken your frying pan melee weapon. After you repair it with Mason in Sunnyside Ranch, you gain the ability to charge your attacks. This skill is immediately useful, because you can pair it with your bombs.

Set a bomb, stand near it, and charge your shot. Unleash your charged shot to send the bomb flying across gaps or into the middle of a group of enemies. If you do it quickly enough, the volleyed bomb will explode a safe distance away, potentially triggering a switch you otherwise couldn’t reach. Numerous early puzzles rely on that technique.

Most enemies you encounter in the areas closest to Potcrock Isle are weak. You can see them approaching because shadows appear on the floor, or they emerge from eggs, or they grow out of the ground. You don’t have access to ranged weapons at that point, which means that if you rush your opponents, you may get closer than you intended and take unnecessary damage.

Since most of your foes are quite mobile, let them crawl or ooze toward you. Then just swing your frying pan repeatedly to beat them into submission. They may drop hearts that restore health lost due to damage you may have taken, or ingredients you can use for your recipes. Be ready to move forward quickly if necessary.

You encounter numerous bosses as you advance through Eastward. They may seem overpowered at first, but they have weak points you can exploit if you watch their patterns and the environment.

The first boss likes to toss debris at you, but sometimes it also tries to suck you toward it. Drop a bomb so it inhales explosives, and then move in and hit the metal beast with your frying pan while it is stunned.

To defeat the crab-like second boss, you must activate four posts at the edges of the pen positioned near the center of the screen. Doing so produces steam jets from each opening along the wall. If the boss is resting inside or near one of those openings, the heat temporarily incapacitates it, and you can move in to safely deal some damage.

Near the end of Chapter 1, you need to switch between the two characters to solve some puzzles. This isn’t necessarily obvious, although Eastward does note that Sam might have more luck with the nearby obstacles. During such sequences, you can easily switch back and forth between characters at the press of a button.

John uses his frying pan and explosives to clear obstacles and to drag heavy objects. Sam relies on projectile magic to light up mushrooms and to clear others from the path, or to temporarily freeze enemies. Usually, the best approach is to let John quickly clear enemies out of an area, and then switch to Sam and have her run across the area before any enemies (such as the man-eating plants) have time to revive.

If you find yourself stuck on a puzzle, you probably just need to look at your environment more closely. There is often a bit of electrical wire you can connect to activate a switch and open a door, or you might need to kick a bomb somewhere to hit a distant target (such as heavy crates or even underwater switches). Sometimes, you also need to drag objects so they protect you from bursts of harmful steam. When in doubt, investigate everything. As long as you pay attention to visual cues, you shouldn’t stay puzzled for long.