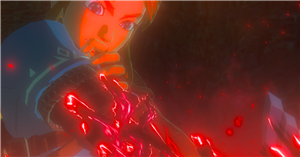 Nintendo released a new trailer for the The Legend of Zelda: Breath of the Wild sequel on Tuesday. The publisher still hasn’t announced a specific release date nor a title for the game, but that hasn’t stopped fans from speculating and having fun with the trailer.

The new reveal — which is just over a minute and a half long — was jam-packed with all sorts of new information about the game. It showed us more about Link’s new powers, as well as what his basic character design will look like. And while we got some good bits of concrete information, the trailer has also offered plenty of fodder for people who enjoy reading into the tiniest of details to develop theories about the new game.

It’s just fun to speculate and pick the trailer apart for possible connections to previous Legend of Zelda games. So, we decided to round up some of the biggest and most thought-provoking fan theories we’ve found so far. Again, none of this is confirmed news, but it’s a great way to see what fans are getting excited about in the upcoming game. As we get closer to release, we’ll continue to update this list with all the cool stuff we see as more information comes out and fans formulate new ideas.

Do we play as Ganon in Breath of the Wild 2?

Probably the most prevalent unconfirmed theory is that we won’t play Breath of the Wild 2 as Link. Instead, in a series first, we’ll actually play the game as Ganondorf. The bold theory would represent one of the largest departures in the history of the Zelda franchise, but the idea has picked up a lot of traction among loads of fans.

The basic gist of the theory is that the “Link” we see in the trailer isn’t actually Link, and that it’s actually the shriveled Ganon we see in the beginning of the trailer. The idea is supported mainly by the visual similarities between Ganon and the character in the trailer, who wears a one-shoulder tunic like Ganon. Also, we don’t ever see this character’s face.

Besides those visual similarities, there’s a also bit of lore in Breath of the Wild that may support this theory. In a tapestry, we see a hero saving the land from the calamity 10,000 years before the events of BOTW. The hero saving the world looks like the zombie Ganon in the dark and the new “Link.” Once again, this has led some people to think there’s some kind of connection.

Those are the broadest strokes of the theory, but if you want to go in-depth, you can check out this video from Kinda Funny Games that breaks down the theory in full.

Can we play as Zelda in Breath of the Wild 2?

At the beginning of the trailer, we see Princess Zelda falling backwards into a dark pit. Although this might seem like a sign that we won’t get to play as her, some fans are speculating otherwise.

Once again, this theory sort of hinges on the fact that we don’t know with 100 percent certainty that we play as Link, since we don’t see his face. However, from the character’s design — they wear a tunic that covers half their chest — we can assume that the character we see isn’t Zelda. Why? Because she probably is not flying through Hyrule’s skies with one tiddy free.

However, some people are still holding out hope that we can play as her, and that we’ll get to choose who falls into the deep dark pit at some point in the game.

Do we return to Skyloft?

One of the most obvious connections between the Breath of the Wild sequel and this trailer is The Legend of Zelda: Skyward Sword. The opening cinematic of Link from the trailer is pretty much the same exact scene of Link falling through the clouds in Skyward Sword. What’s more, the trailer shows floating islands just like in Skyward Sword. The description under the official Nintendo YouTube account literally says, “Return to Hyrule — and the skies above,” which is a pretty clear connection to floating island of Skyloft.

The cinematic parallels and the fact that Nintendo has announced that The Legend of Zelda: Skyward Sword is is getting an HD Remaster for the Nintendo Switch, while other Zelda games have not, has led some people to speculate that Link might return to Skyloft in the latest game.

Is Breath of the Wild 2 connected to The Legend of Zelda: Twilight Princess?

Does Link time travel in the Breath of the Wild sequel?

Oh, and one possible Easter Egg in the Breath of the Wild 2 trailer…

Like everything else on this list, this tidbit has not been confirmed as either intentional or meaningful. However, one fan believes the music in the latest trailer is a backwards version of the song played during the original Breath of the Wild cutscene about the tapestry depicting the prophecy.

Needless to say, there’s still so much we don’t know about the Breath of the Wild sequel. As we get more information, we’ll continue to collect all the biggest theories we see.