If you tuned into February’s Animal Crossing: New Horizons Nintendo Direct, then you might have noticed that everyone in viewer chat was fixated on one thing. Every so often, you’d see a current of frog emoji blitzing through the livestream. Or, folks would just say two words over and over again: froggy chair.

As fans know, the froggy chair is a part of a furniture set within Animal Crossing, which also includes something called a lily-pad table. It’s a humble ensemble which, while included in the release of Animal Crossing: New Leaf, may not have graced many households with its presence. But now, everyone is dying to know if froggy chair will make an appearance in the Nintendo Switch installment, myself included.

The meme was originally born on Reddit, where users uploaded an Avengers: Endgame joke that riffed off a scene involving Thanos and a young Gamorra. While it was a simple edit of a template, its wholesome, unexpected nature made it easy to embrace. 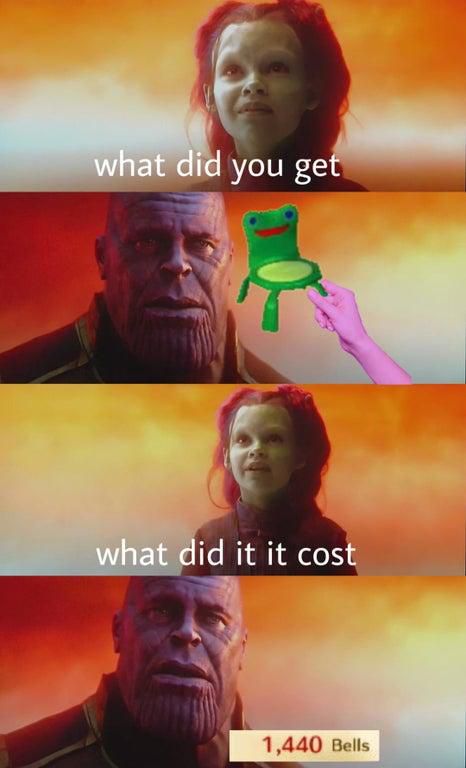 While the gag was good, it percolated slowly — until the marketing push for Animal Crossing: New Horizons really started rolling. With more people thinking about the idyllic life simulator, more folks started embracing the froggy chair joke. Part of what makes it funny is that, because the image comes from a 3DS game, seeing the froggy chair reproduced, enlarged, and widened diminishes the already pixelly image’s quality even further. It’s silly for everyone to say they’re obsessed with this thing that looks kinda bad, yet is somehow Very Important.

It’s random, but really, the froggy chair obsession encapsulates the Animal Crossing spirit. Here is a series where something as simple as holding a balloon or taking a sip of coffee feels exciting — of course we’d be the type of fandom who would give it all to get a small, cute pleasure. Everyone playing the game probably has their own version of the froggy chair.

Unfortunately, while it’s still unclear if Nintendo will include the amphibian furniture in Animal Crossing: New Horizons, the memes are still pretty damn good. Here are some of my favorites.