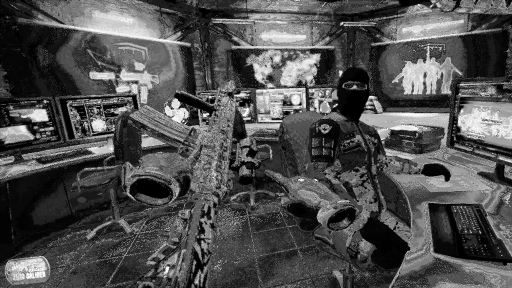 Is this latest Oculus Quest FPS worth a look? Find out in our Zero Caliber: Reloaded review!

It might not exactly be the most wholesome game, but Zero Caliber: Reloaded still has its heart in the right place. You can sense, amongst the noisy shootouts and explosions, a genuine desire to meet the many, lofty demands of the VR shooter fanbase. And developer XREAL gets a lot right in its mission to satisfy — in some ways more than most other shooters on Quest — but Reloaded is somewhat constrained by technical hiccups and core design issues.

For some, the elevator pitch might be enough to sell on its own; Reloaded is a retooled version of the PC VR version of Zero Caliber that (wisely) keeps a wide berth from the saturated competitive multiplayer scene. Instead of an ill-fated attempt to take on Onward and Pavlov, XREAL offers up a full campaign for either single-player or co-op with up to four friends. Tutorials included there are 23 individual levels, with earlier missions taking around five to ten minutes and later stages stretching out to 15 minutes or more. Some quick napkin math will tell you that’s a modest amount of game – not the longest campaign by any standards but a decent four to five hours that can go even longer when tackling higher difficulty modes and replaying levels with friends.

For much of that time, Reloaded delivers core VR shooter thrills. This is a game that leans into the platform’s strengths, often literally. Though it’s less concerned with realism than some of its rivals it’s far from a run and gun shooter – firefights require you to hunker down behind the best possible cover and lean out with an eye trained to your weapon sights. Compared to the head-spinning speed of recent games like Alvo and Doom 3 VR, it’s incredibly refreshing to get back to basics and rediscover some of the mechanics that feel really unique to VR, like blind-firing around corners when your health is low or crouching down to the ground to find a new angle on the enemy.

Fans of the original Zero Caliber will know that its real claim to fame, though, is its exhaustive and authentic weapon customization and handling. Crucially, it’s survived the transition to Quest fully intact. There are a lot of guns in Reloaded, from rifles and pistols to SMGs and shotguns, and you can really feel the individual craftsmanship XREAL has put into each. The P90, for example, needs clips inserted from the top, and every firearm has some kind of pin, handle or lever to adjust for a satisfying ‘click’ before you can return fire. Each has its own strengths and weaknesses – the AK-47 feels convincingly vicious as it rattles about in close quarters, while my personal choice, the ??? LMG rips through enemies but springs out of your arms if fired with one hand and is tricky to use in tight spaces, especially when contending with the game’s light-but-appreciated physics systems.

What is it?: A modern military VR FPS with a full campaign to play in single-player or with up to three friends.
Platforms: Quest
Release Date: May 13th
Price: $24.99

Not everything’s perfect; climbing surfaces is cumbersome compared to the breezy scaling in Population: One, and reviving teammates is overly streamlined to the point of just standing on top of them for a second. But overall it’s impressively realized – even throwing grenades feels easier and more accurate than it does in most other games.

Hefty combat is paired with a staggered progression system that unlocks new weapons as you rise through the ranks, though they still need to be bought with cash earned during play. This is where the game gets really technical; there’s an unending supply of laser sights, grips and scopes to peruse, more than was probably necessary, but the chance to head back to the lobby and completely reevaluate my loadout after every few levels helped keep my intrigue in the campaign. Each of these is detachable, too, so if you find another weapon you want to try mid-level, you can swap out your attachments in seconds. You can even do this between friends during co-op sessions; there’s an incredible amount of versatility in it.

What lets Reloaded down, then, is an assortment of the same old factors:  a variety of technical hiccups, underwhelming AI and simplistic, problematic and repetitive mission design.

None of these factors are troubling enough to ruin the experience but each gets time to do some damage and, strangely, they seem to scale with the player count. Some missions are seemingly designed for a smaller number of players while others feel dependent on a group of four. Finding the right size for each mission hurts its consistency; smaller missions in Reloaded play out as intended with two players enacting careful, concise gunfights that are overcome with proper communication and teamwork. But, even on the hardest difficulty, a full team of four will likely outpace the mission’s structure. One level descended into chaos when we seemed to tear through the enemy faster than it could keep up with. Previously cleared rooms suddenly had new soldiers appearing from thin air, and we found ourselves fighting the restrictive ‘active mission’ zone, which moves along with objectives. At one point we even had enemies camping right on top of the spawn point.

On the flip side, there’s a great mission later on with an expansive warzone and front lines to defend, but the odds are really stacked against you in single-player. At the very least the game could use some sort of indicator for what player count is suited to which level.

Zero Caliber: Reloaded is a smooth locomotion game with some options to help mitigate sickness. It’s also a very physicaly active game that requires lots of leaning and crouching, so keep that in mind.

Bugs aren’t just limited to mission design; I also found my hand getting stuck in my rifle quite often and both myself and one of my teammates encountered a frustrating issue where controller tracking seemed to bug out in-game while it was fine in the Oculus menu. Mix in some full-on crashes when transitioning between levels and enemies getting stuck on geometry and Reloaded feels like it could have used more time to iron these issues out.

Even with the four-player issues to one side, though, some problems persist. Enemy AI isn’t as dumb as you might fear but still not quite up to the standard you might hope. They’re able to take cover, find vantage points and even roll out of the way of incoming fire, but you’ll also find them obliviously standing out in wide-open battlefields and turning away from you in the middle of a firefight. They’re complete bullet sponges, too, and easily shake off anything other than a straight headshot. It robs the game of some of that lethal proficiency that comes with well-placed shots.

It’s a similar story for the overall mission design, which clearly strives for variety but, at best, only maintains the illusion of it. Objective types almost always boil down to simply clearing an area full of enemies in the same way you’ve been doing right from the start – there are defend and destroy orders but they don’t significantly change up the gameplay and some areas get too crowded with four players. That said, XREAL has gone to great lengths to provide environmental variety, from icy skirmishes to the uniquely disgusting experience of standing in human waste in sewers. Reloaded isn’t what you’d call a looker — and the pop-in on vegetation and other objects is very noticeable — but it does a decent job given the hardware it’s running on.

Zero Caliber: Reloaded is painfully close to getting all the way there. It’s got some of VR’s best weapon handling and incredible customization alongside an admirable effort to deliver the full shooter campaign we all crave. And, a lot of the time, that’s enough – hunkering down into cover, reloading your weapon and then leaning out to score a headshot doesn’t tire over the course of the 4 – 5 hour campaign. But the game is also plagued with familiar issues like underwhelming enemy AI, and its missions seem to cater to different numbers of players, creating an uneven experience throughout. It’s still an easy recommendation for anyone starved for single-player or co-op campaigns on Quest, but there’s plenty of room for VR shooters to grow from here.

For more on how we arrived at this score, read our review guidelines. What did you make of our Zero Caliber: Reloaded review? Let us know in the comments below!