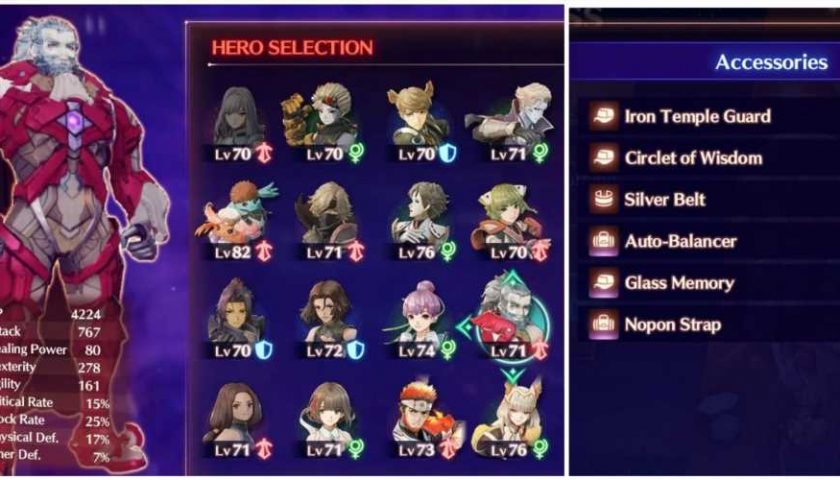 In the latest addition to the Xenoblade Chronicles series, Aionios is in the grips of constant warfare, and you're tasked with liberating colonies, defeating monsters and unlocking helpful classes and NPCs.

There are lots of returning accessories that can be collected and equipped, as well as plenty of brand-new ones to discover, that add to stats and boost abilities. This list gives the lowdown on which to prioritize to benefit your unique team the most until the Legacy of the Seven Rings become available in the end game.

Perfect for any Attacker, the Violent Stone Accessory can boost all Auto-Attack damage by 116 percent. This incredible leap in damage can currently only be acquired upon collecting Carson's Collectopaedia Card. He's found in Colony Tau, in the High Maktha Wildwood, and is part of a quest too.

You can equip this rare Violent Stone by opening the Pause menu, choosing the Characters tab, choose the Accessory section and which inventory slot you'd like to fill. Pick the accessory from those available to add its stats. For the most powerful form, conquer the Unobtrusive Liggy found on Elaice Highway. 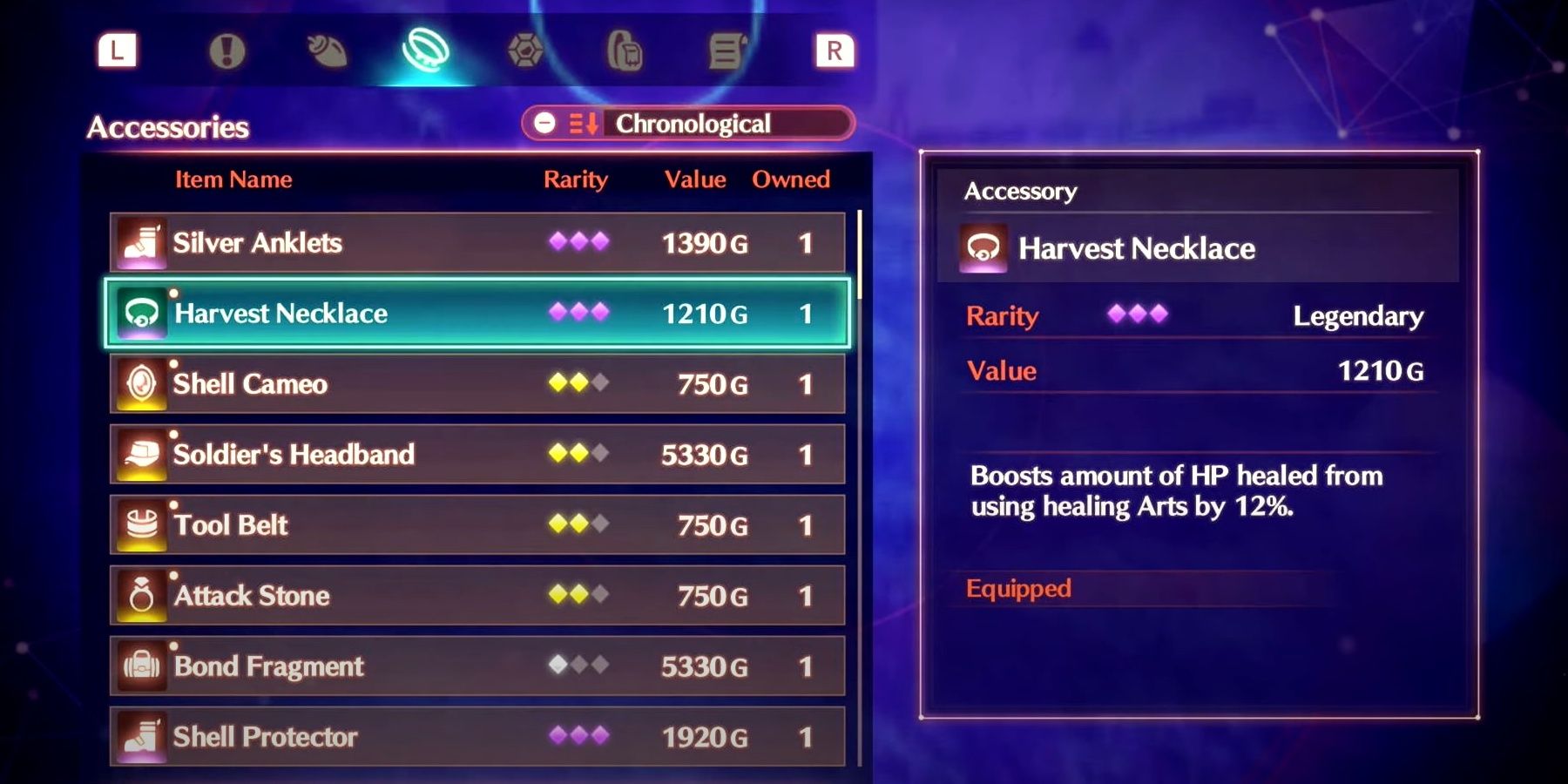 Every team needs a Healer, and this accessory is a must-have for anyone using the Healing Arts. The most powerful Harvest Necklace will increase healing provided by a huge 12 percent, and can be dropped by the Hazardous Jarrahed. This unique monster is level 16, and can be found in the Eagus Wilderness at Racine's Platter. It's worth 1210G, but don't go selling it on if the monster does drop it.

Earlier in the game, it's worth getting the common accessory from the Hilltop Caravan. It still boosts all healing by 10 percent and is less risky to get your hands on. Alternatively, traveling to Shark's Jaws Cape on the Yzana Plains, you can find a loot crate possibly containing this accessory.

Any Attacker worth their salt goes into battle with as much firepower as possible. Therefore, the best of them will find and equip a Ceramic Belt. This amazing accessory boosts attack by 32 percent in its legendary form, 31 percent in its rare form, and a rather impressive 30 percent even in the common form.

For the legendary Ceramic Belt, you'll need to defeat the unique Said of the Boar monster in the Candesia Region.

While you're in Upper Great Sword, pop into their store to boost the Defender of your party and make sure they're absorbing damage well. For 7320G, it's possible to pick up the common Titanium Temple Guard accessory. This reasonably-priced armor will boost your Defender's max hit points by 32 percent, so it's a vital piece of equipment for a tank.

Defeat the enemies at The Cascade Hulk and open the loot chests nearby for the chance to pick up this accessory for free.

Another accessory every good Defender needs is the Heavy Weak Guard. This is going to cost you a lot more from the commissary at Colony 30, but even in its common variant, it increases your Block Rate by 30 percent. Collecting Lazslo at Colony 4 has the chance to award some great trinkets, including the rare 31 percent Block Rate Heavy Weak Guard.

If you want your party to be at their peak, then it's time to challenge the Heretical Saurow and hope it drops the legendary 32 percent Block Rate accessory. Visit the Old Kana Battlefield and prepare for a level 25 fight with this beast.

A very expensive accessory, the Circlet of Wisdom is an essential piece of kit for any Healer. Part of the main quest line involves liberating Colony 30, and you can then gain access to the NPC Valdi, who is part of the War Medic Class. This will be one of the most valuable additions to any party, and registering his Collectopaedia Card awards this accessory.

In keeping with the NPC's Medic Class, the Circlet provides a 26 percent boost to any healing effects. Equip Valdi with this accessory for one of the best healers in the game.

For the Defender on your team, Dexterity is an important stat, reducing the chance of them getting hit and being removed from the fight. Back at the Drahagar Store, the Carbon Gloves accessory is a useful item to pick up if you have the coin, costing 7320G. If you only want the best for your party, then defeating Fineblade Faltaar will net you the legendary variant. Be warned, as this unique monster is level 47 and only found out on the Great Sword's Hilt.

Whichever you choose, your Defender's Dexterity will improve by either 32 or 31 percent, making them one third more likely to get out of the way of any oncoming hits. 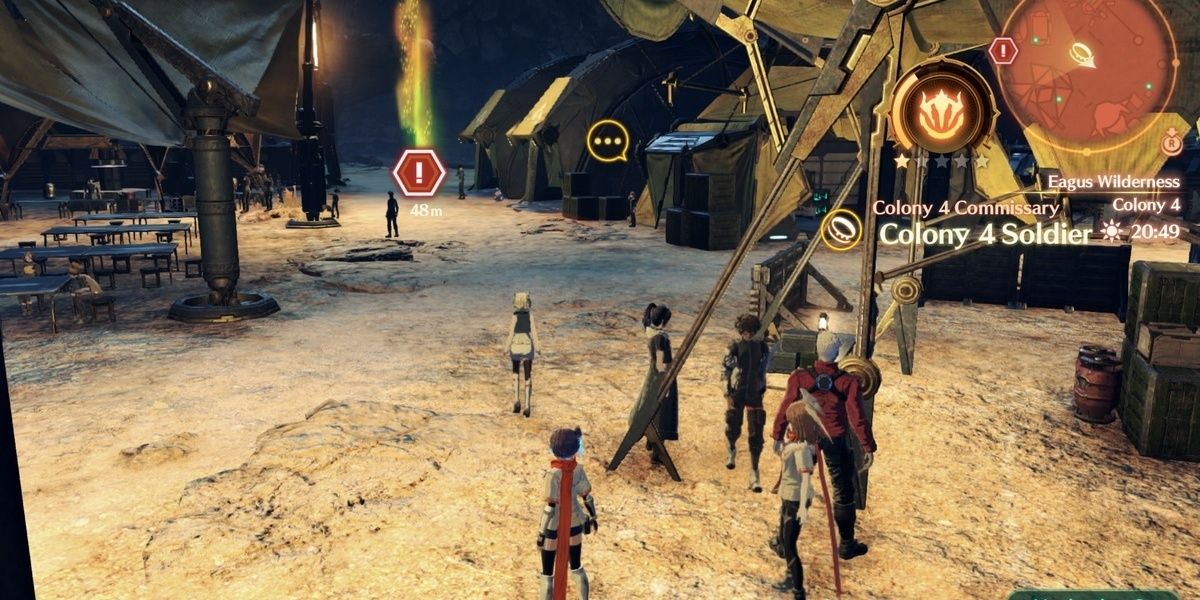 Everyone wants to be doing the maximum damage their weapons allow, so you'll want to equip an Ice Headband to achieve up to 30 percent Critical Hit Rate. For a boosted 25 percent Critical Rate, you can register Repapa's Collectopaedia Card. They can be found at Colony 30, so just wander around to meet them.

The more common Ice Headband can be bought from the commissary at Colony 4, which offers a respectable 20 percent boosted rate. 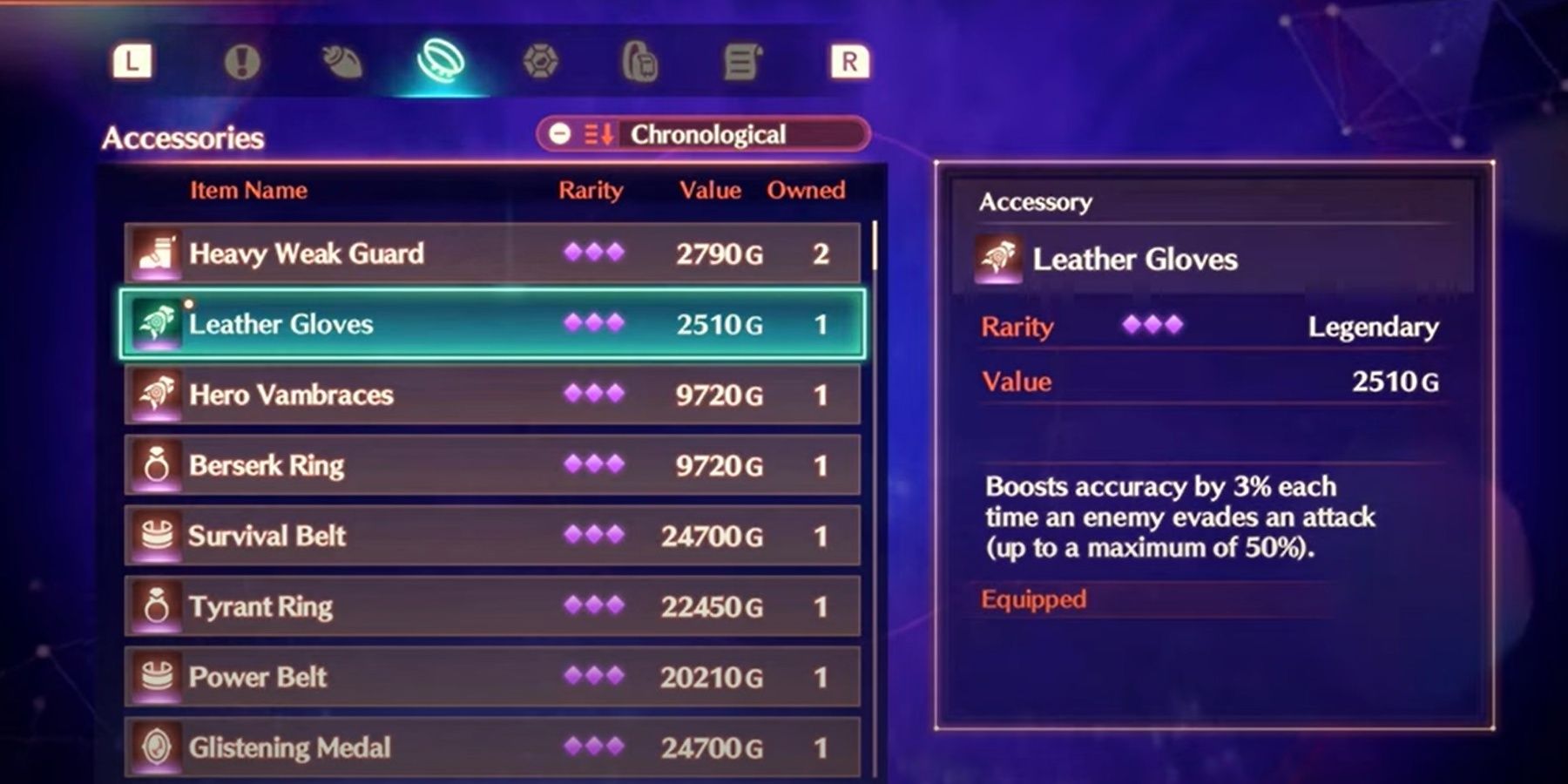 If you're struggling to land your hits, equipping Leather Gloves can make it significantly easier to do damage. Every time an enemy dodges your attack, this accessory will boost your accuracy up to a whopping 50 percent. This is great for any Attacker, and the legendary version can be dropped the first time you defeat the Heretical Saurow, though be wary, as it is a level 25 monster.

To find this unique beast, you'll need to travel to the Fornis Region and search the Old Kana Battlefield. Weaker variants of the accessory are not currently available. 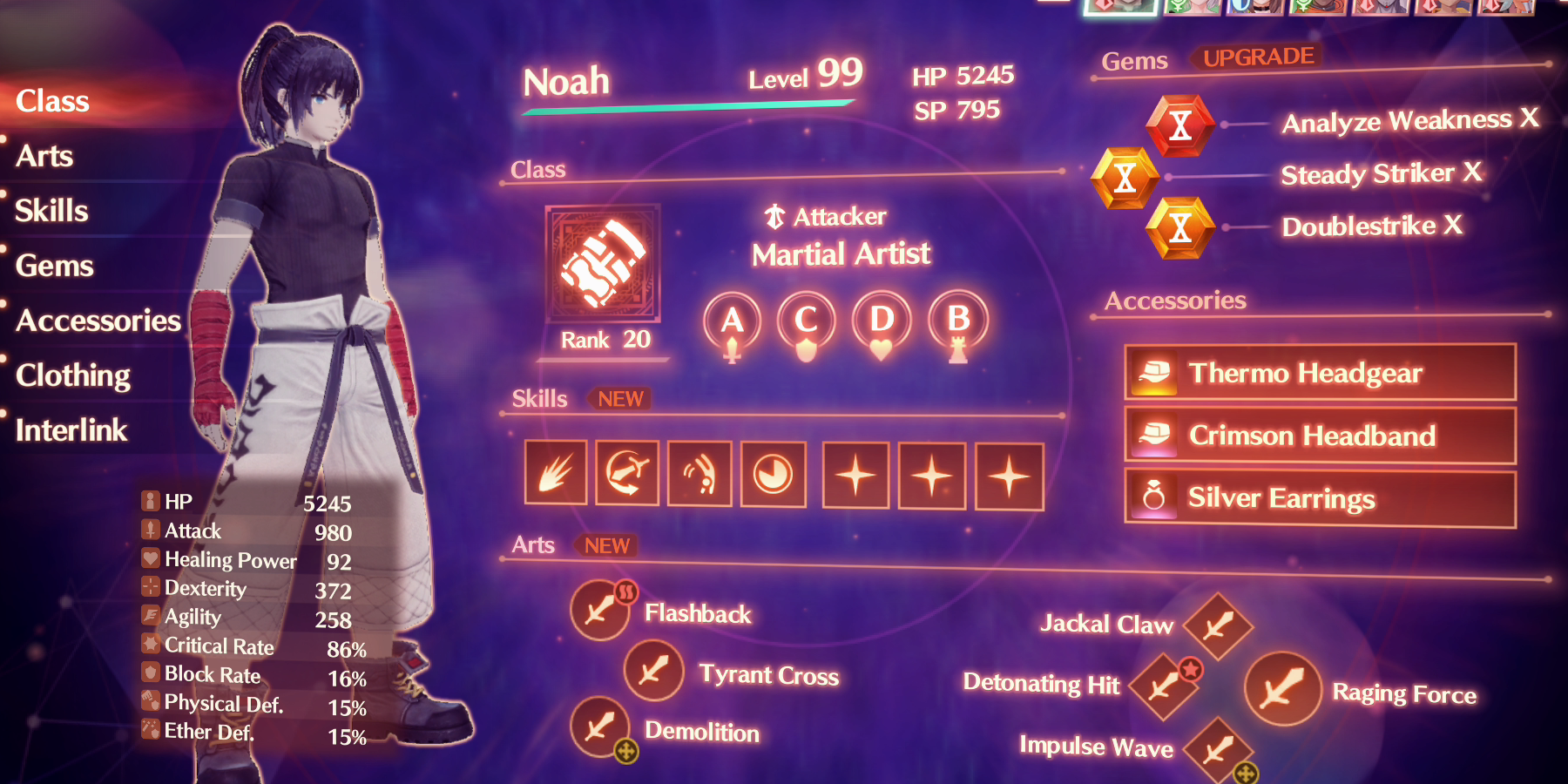 There's much less risk of coming away from a fight injured (or worse) if the opponent is dead within the first 30 seconds. The Wind Leg Frame accessory can boost damage output by up to 30 percent, depending on the rarity, for a powerful boost at the beginning of a fight.

A great way to acquire rare accessories is by registering Collectopaedia Cards and claiming the rewards. In Colony 4, you can come across Laszlo, and registering him can result in adding this useful accessory to your roster. Alternatively, for the common variant, keep an eye out at the commissary at Colony Gamma.